This weekend in America, with the new Disney animated flick, The Princess and the Frog, going Number 1 at the box office, a record was broken. This year there have now been 43 different Number 1 films in America, beating the record of 42 set in 2003. Given that Avatar comes out this week, the record is sure to be increased (and Sherlock Holmes comes out the weekend after so there’s a chance the number might get to 45).

What this means is that each Number 1 on average only stayed at the top for around 8 days, before a new king comes in. This is a big change in the industry over the course of the last 20-25 years. In 1982, for example, there were only 17 different Number 1 films – which meant each one could count on average 21 days at the top of the box office before being relegated by a new leader.

The graph below shows the steady progression of the numbers of Number 1 films since 1982: 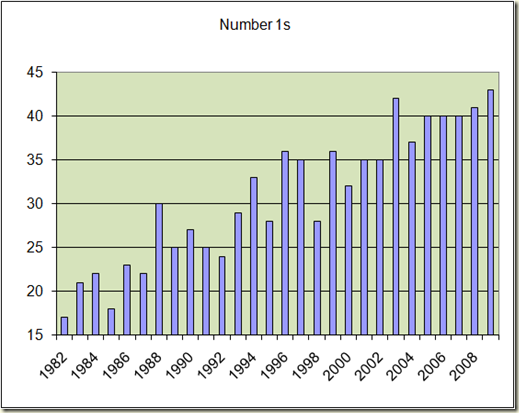 The inescapable fact is that the number has been growing, and will most likely keep growing closer to 52.

So what does this mean? Obviously this is nothing new for those in the film industry – in fact this fact is the bane of their existence, because what it means is that the window for getting your film into the cinema and making some money before the next blockbuster comes along is shrinking smaller and smaller with every passing year.

It means more and more emphasis is placed on the opening weekend.

You want to build word of mouth? Fughedaboudit. Unless you're Slumdog Millionaire and you’re going to win Best Picture, you’re stuffed, and even then, you better have made your film for nothing.

You have one weekend to make some money – in fact so well attuned in is the industry that by Friday afternoon (ie the opening afternoon) distributors will have a fair idea of how much money their film will make on that day, and thus they can extrapolate out for the whole weekend and then for the whole run of the film. They know before its opening night whether or not a film is going to be a hit, break even or be a dud.

Just look at the schedule of films that were Number 1 this year at the US box office in May to the end of July:

X-Men Origins: Wolverine, Star Trek, Angels and Demons, Night at the Museum 2, Up, The Hangover (stayed there for 2 weeks), The Proposal, Transformers 2 (another that survived for 2 weeks), Bruno, Harry Potter 6, G-Force, Funny People.

That’s 14 weeks during the US summer and 12 different Number 1s! When a huge film like Harry Potter 6 can only stay at Number 1 for a week, you know the industry is cut throat.

Here’s a list of the films that hold the records for the most consecutive weeks in the US at Number 1:

What sticks out (apart from the realisation that Crocodile Dundee was bloody popular!) is that all of these save the phenomenal Titanic were made before 1990. So not even the super successful films are staying Number 1 for long.

The Dark Knight, with $533.3m at the US Box office, is Number two all-time box office earner in the US behind Titanic (not accounting for inflation). It was the biggest hit you could ever hope for if you ran a studio. In 1997, Titanic was Number 1 for 15 weeks. The Dark Knight? It was Number 1 at the box office for only 4 weeks. To put that in some perspective, in 1982 Porky’s was Number 1 in the US for 8 weeks. In 1984 the following films were Number 1 for 4 weeks or more: Beverly Hills Cop, Tightrope, Ghostbusters, Police Academy and Terms of Endearment. I can honestly say I have never even heard of Tightrope!

What we’re dealing with is a completely different ball game.

Imagine being a film that opened the same week at Spider-man 3. Lucky You – starring Eric Bana and Drew Barrymore did. It came 6th and made only $2.7m. The second biggest film that weekend was Disturbia (no I don’t remember it either), it had been Number 1 the week before; but in this weekend it made a mere $5.4m, a whole $145 million less than Spider-man 3.

So if the big guys are struggling to hold the audience, what hope the “little guys”? Well here’s the list of the 20 films that took the longest time to get to Number 1 (ie the ones that slowly built an audience through word of mouth):

Again, aside from Gran Torino and Paranormal Activity, nothing comes from the last ten years, and 15 of the films come form the 1980s. And the two from the 2000s? Well Clint Eastwood is a guy who has a built in audience and it made number in early January – typically a lull time for blockbusters.And Paranormal Activity was made for next to bugger all and used a very snazzy web based campaign, which was based around people going onto the website and demanding it be shown in their city. If enough people in an areas did this, it got shown. This was very successful and built up a huge buzz for when it finally did go large. The number of theatres it showed in went from 12 in the first week to 33 then 160 then 760. In its 5th week, when it hit Number 1, it was showing in 1945 theatres. That strategy won’t work for many other films (it was a very geeky fanboy type flick), and it also means in reality they got to Number 1 more like in their 2nd or 3rd week. 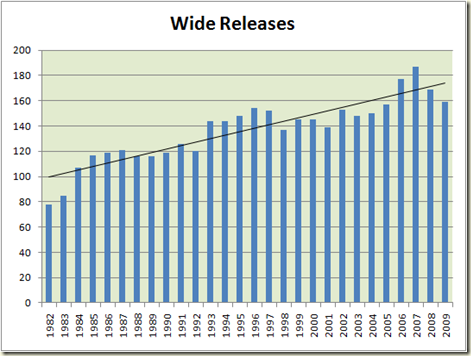 While there’s been a slight decline in the last couple years due to the GFC and the threatened actors strike, the upward trend in unmistakeable.

What this means is more films fighting for a smaller, more intense bite of the pie.

So does this have any impact on Australia?

Well yes and no. Yes, because we live on Hollywood fodder, so we get what they make. But Australians are a bit more loyal to their Number 1 films than are Americans. Here’s the number of different Number 1s in Australia since 2004 (I don’t have any earlier figures):

So well done Australians for not being so fickle and desirous of seeing the latest new thing; sure it might be due to the fact we don’t have a big enough population to warrant similarly huge marketing campaign to the US, but hey, let’s give ourselves some credit – in Australia a good movie can stay fresh for longer than a week And for those who feel the need to see that big film in the first week or be considered socially inept? Relax: in Australia you’ve got a whole 11 days before it’s no longer the king of the hill.