Abbott beats Turnbull and Yes, the world is still spinning

Tony Abbott is leader of the Liberal Party.

It’s hard to even know what to think. They actually did it.

If the Liberal Party were a teenage girl writing a diary, today’s entry would be:

“Dear diary, today I did something I think I might regret, I decided to drop my current boyfriend, even though he is the smartest guy in class, and has finally started coming up with sensible things to do, and decided to start going out with this guy who most of the other girls in my class hate, and who gives off a bit of a vibe that things were better in the olden days… I’m not sure why I did it actually, especially as most of the time I think he’s a bit of a bully… But everyone told me not to do it, so I thought, bugger them, I’ll do it anyway… I have a feeling though it may have been the wrong call… especially as all my friends at lunch told me they no longer want to be seen with me.”

But no, this is real. It actually happened.

Abbott beat Turnbull 42-41, which is rather odd because 84 people voted. One goose who was able to get nominated and then elected to Parliament was unable to work out the system of write down the name of the guy you want to win, and instead wrote “No”. Just bizarre.

In the first round, which featured Turnbull, Abbott and Joe Hockey, the count came in Abbott: 35; Turnbull: 26; Hockey 23. That Turnbull didn’t pick up all of Hockey’s votes demonstrates that a) there were a few in the party who were notionally in the moderates camp, but were not enamoured of Turnbull himself, and b) the the moderate side of the party totally stuffed this one up. 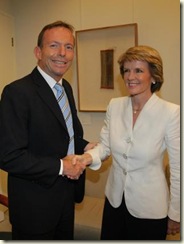 Before the vote Abbott was saying he had 35 votes, and he was right – like the professional politician he is, he had done the numbers. Turnbull meanwhile killed Hockey due to Hockey’s dumb “let’s have a conscience vote on climate change policy”, and as a result Hockey came across as a buffoon. Hockey should have seen the writing on the wall by this morning and stood aside. It still might not have changed the result, but if Hockey had stayed out of the way (and backed Turnbull completely), it would have helped Turnbull’s cause. Instead he split the vote.

At points like this it’s not hard to think of Brendan Nelson… just think if the Liberal Party had kept him as leader? Malcolm Turnbull would still be thought of as the bright hope for after the election, Joe Hockey would still seem a credible future leader, and Tony Abbott would still be a head-kicker, who no one would seriously think of electing leader. Instead, such madness. With Nelson as leader they would have lost the election, but they were going to lose with Turnbull and they will lose with Abbott. Just madness by all involved – Turnbull mostly for challenging in the first place. Nelson could have held the party together and allowed them to regroup. Now where are they? Lost and split.

The problem with the vote today is the 42-41 result. Missing was Fran Bailey, who was in hospital. She would have voted for Turnbull. Next week (assuming they win) there will be two new MPs from this Saturday’s by-election in Higgins and Bradfield, both of whom have said they support Turnbull, so next week the vote would have been 44-42 in Turnbull’s favour! So much for unity. (As an aside, how much do you think the ALP wishes it had run a candidate in Higgins now?)

So what happens from here? Will Rudd call an early double dissolution? Geez the temptation must be great. The Liberal Party is broke (Turnbull was apparently kicking in a lot of his own cash – expect that the dry up now), they have a leader who has no reputation as being someone whom has any connection with the centre of the electorate, and they are going up against a PM in Rudd who is sitting on a 56% satisfaction rating and a preferred PM of 65%. The ALP will also have quote after quote of Abbott saying outrageous things – like “Climate Change is crap”.

Tony Abbott says he is not afraid of an election. Well his seat has a margin of 8.8%, so he doesn’t have to worry, but I would love to know the break down of votes for Abbott and Turnbull according to the margin of their seat, especially when Abbott has already flagged a return to a WorkChoices style industrial relations scheme. So his big ticket items are anti-climate change and return to WorkChoices. Abbott is of course now saying he believes in climate change (though heavily qualified by saying there is debate over how much of a role humans have), but the reality is the ALP will repeat again and again that he is a climate change sceptic. Will it be successful? Well it’s an easy sell, because let’s be honest it sounds true.

But the problem for the ALP is if they have a double dissolution election before June 30 next year, the Senate gets backdated to July 1, 2009; meaning there will need to be a Senate election before June 30, 2012. So let’s say there’s a double dissolution election in March 2010, if Rudd wants to keep the Senate and House of Reps in step, he’ll have to have another election in roughly 2 years. But worrying about what may happen in 2012 could be something for later, when the chance of a big election win is there now.

I actually think the ALP will try eke it out till after June 30 and then call a double dissolution. They will bet that Abbott won’t get any more popular as time goes on, and the divisions in the Liberal Party will only be exacerbated (and the ALP will do everything it can to exacerbate them!). Part of the reason I think this is because I am trying to work out what Abbott’s front bench will look like. No Turnbull, possibly no Hockey. Bronwyn Bishop will probably get a return, Sophie Mirabella as well will likely get a greater role. These are not people who appeal to the centre – Mirabella for example was one of the few MPs who boycotted the apology to the Stolen Generations. I think Rudd and the ALP will enjoy going up against them in Parliament.

Will there be a poll “bounce”? I doubt it – though I don’t think there won’t be too much of an upside for the ALP. The LNP are at 43% now, any bounce for Abbott would have to be to take it to above 45%, otherwise there will have been no real difference, no real change, and no real point to the whole debacle.

As an aside, I think this has done wonders for Turnbull. He loses, but loses with his credibility intact. My hope for him is that the lesson he takes from today is that he is at his best when he sticks to principle and policy. Turnbull lost his way by stupidly trying to bring Rudd down through some huge conspiracy and also a dumb tendency to go against his instincts and pander to the right – he never sounded credible on asylum seekers. Turnbull, if he chooses to stick around, may be later seen as a saviour of the moderates – and if he sticks to principles and policy he may actually become the leader everyone thinks he is capable of being. But that may be for another time.

UPDATE: Apparently the one informal vote did not say “NO”, it said “NO VOTE”. So apologies to that goose, you weren’t stupid, just gutless.

I agree. Turnbull can go out proud that he fought and lost on an issue he was passionate about. While not exactly a supporter, I'd long thought the far worse outcome for Turnbull than being beaten by Rudd, would be getting beat whilst proposing policies and views he didn't agree with.

This is not a good outcome, but his biographers will be able to sell it as a passionate effort to help the country (same with the chapter on the republic referendum) and then kick on into later exploits, conveniently ignoring the whole 'never made it to PM as intended' part.