Flick of the Week: “Now what's all this crud about no movie tonight?”

This week’s flick of the week takes us with Jack Lemmon from Some Like it Hot, back to his breakthrough (and Oscar winning) role as Ensign Pulver in Mister Roberts.

Mister Roberts was an adaptation of a play by the same name. Fonda had played the eponymous role of a lieutenant aboard a supply boat in World War II on Broadway and was desperate to play it on film. The director, John Ford, choose him above the protestations of the studio (who wanted box office draws William Holden or Marlon Brando). But I have to say he was wrong to do so. Fonda is absolutely fantastic in the role, but the is no getting away from the fact he is too old. At the age of 50 he can’t really come across as a disgruntled young officer, who has dropped out of medical school to join up and fight, and who is now desperate to be put on a battleship, rather than the supply ship he finds himself.

That said, as much as I think he was badly cast, his performance is faultless, and is up there with the best of his career (and the age aspect could have been fixed with a few tweaks of the script). 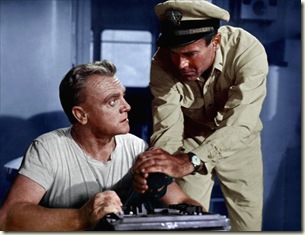 The plot involves Mister Roberts battling with the captain of the ship, Morton, played by James Cagney in his last great role. Mister Roberts keeps trying to get transferred, Morton continually denies his requests, knowing that Roberts is the best member of his crew, and is crucial to his own chances of being promoted. Morton is an ex-merchant marine, and also begrudges the fact that Roberts is a “college boy”, who has supposedly had it easy while he has had to work hard his whole life, often serving the rich. Thus he now sees this as his opportunity to have some class war payback.

The other two officers on the ship are William Powell, in his last role, as the ship’s Doctor, and Lemmon and Ensign Pulver, the officer in charge of laundry and morale.

Famously John Ford, fought with Fonda and Cagney (almost literally in the case of Cagney), and he suffered a gallstone attack half way through and was replaced by Mervyn Le Roy, though there is no way to work out who directed which scenes (as Jack Lemmon notes in the clip below).

It is a hard film to quantify – part drama, part comedy. In some respects it is a cousin of Billy Wilder’s Stalag 17 which came out a couple year's earlier – both film depict war as lacking in glamour and glory – and something that for many of those involved, whether in a POW camp in Stalag 17 or on a supply ship here, can actually be rather boring. 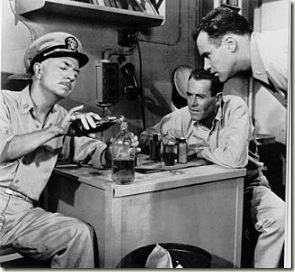 I first saw this film probably around 20-25 years ago (I think it was on one of those Bill Collins movie of the weeks that was on Channel 10 back in the 1980s) and have always had a soft spot for it. It’s beautifully acted, and the script, which while somewhat dated, fits with the time and conveys perfectly the sense of frustration and boredom felt by the men. In a number of scenes Cagney and Fonda go head to head – which is a film buffs delight really – seeing these two greats at work. And both create memorable characters. The film though is stolen by Lemmon. He is the comic element, but also the key role of the film. Without him the film would be a rather maudlin couple of hours of Fonda whining to Powell, interrupted by occasional outburst with Cagney. Lemmon gives the film a zest that make the dramatic points ever more dramatic, and gives Fonda and Powell a sense of place in the film. The scene of Lemmon, Powell and Fonda making scotch is perhaps my favourite in the film.

A key aspect of the film is that of class relationships. Without getting too Marxist about it all, the conflict between rich boy Fonda and working class Cagney, is balanced by the absolute devotion the rest of the working class crew have for Mister Roberts. They are like obedient students to his teachers. Their faith in him is so childlike that they are stunned when he appears to turn on them. When they discover their mistake, their reaction is like a child who knows he has done wrong, and they decide to do all they can to make it up to him. On a level the film seems to argue that society needs these benevolent “upper class” types like Roberts who can assist the poor unthinking lower classes to do the right thing, and that the system only breaks down when people, like the Captain, are placed at positions above their station.

That may be reading more into it than there is, and it is more a case of workers always liking a manager who treats them with respect, especially if the manager’s boss is a power hungry bastard.

Either way, it is a film I enjoy – generally with a bit of a tear. Given that it’s always in the bargain bin if anywhere in a DVD store, it’s well worth picking up.

Below is an interview with Jack Lemmon about the making of the film, plus a couple scenes.