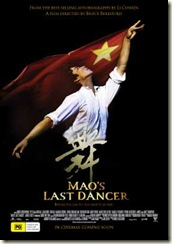 When I heard that Bruce Beresford was doing an adaptation of Li Cunxin’s autobiography, Mao’s Last Dancer,  I was quite hopeful that it would be a success. When I saw the trailer, I was feeling quite positive about its chances. When I read that it came runner up in the People’s Choice Awards at the Toronto International Film Festival, I started to get quite bullish about its box office potential. And then when on its opening weekend both my parents and my wife’s parents told us they were going to see the film, I knew it was going to do well. Both of them like movies, but unless it is the latest James Bond flick, rarely do they go to see the same films (and generally not on the opening weekend).

But when the news came that it made $4.3m in its opening week (the fourth best ever by any Australian film), I have to say I let out a bit of a gasp. And the news from this last weekend is in many respects just as stunning, for while it has dropped a spot from second to third, it was only beaten by Couples Retreat – which had been massively marketed with advert after advert and appearances by the stars on Rove etc, and Pixar’s Up (which had been number one for a massive 5 weeks – only The Dark Knight has been able to do that in the past 5 years).

What it did beat though, was Julie & Julia, the Meryl Street film which would appeal to very much the same segment of the market. Not only that it kept up a strong average screen figure of $7,629 (only bettered in the top 10 by Couples Retreat), made a further $2m to put it at $6.38m thus far, and looks almost a dead set motza to crack the $10 m barrier.

The last Aussie film to make over ten million (that is not Australia or Happy Feet) was Lantana way back in 2001. In fact only 20 Australian films have ever made over $10m in this country, so it’s no small achievement. 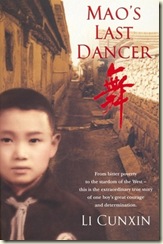 One of the reasons I had initially been excited about the chances of Mao’s Last Dancer being successful was that it was an adaptation of a popular book – so the name recognition was already out there, ready to be taken advantage of. And it is one of the many questions I have long had of the Australian film industry – why so few adaptations?

Looking over the last 3-4 years I find very few. Romulus, My Father in 2007 was quite a successful adaptation of a memoir, making $2.5 million; December Boys, also in 2007 made only $600k; Three Dollars (based on the novel by Eliot Perlman) got to the $1.3m mark in 2005; and the adaptation of Robin Klein’s Hating Alison Ashley in the same year made just over $2m. Other than that there’s none (or at least if they are adaptations, they’re of fairly unknown novels/books).

Why is it that Tim Winton has never been adapted into film? I know Cloudstreet is being made into a mini-series, and Dirt Music was to made into a film by Philip Noyce, but now seems stuck in developmental hell for whatever reasons, and similarly his novel The Riders was attempted to be made into a film, but got done by budgetary issues. But Cloudstreet was written in 1991, The Riders in 1994, and Dirt Music in 2001. What has the industry been waiting for? By comparison, The Hours by Michael Cunningham won the Pulitzer Prize for fiction in 1999; it won an Oscar for Nicole Kidman in 2002.

Now look, I know this can sound pretty glib – after all financing a film is hard enough, let alone having to buy the adaptation rights for a novel. I don’t doubt that it is extremely difficult to get all the ducks lined up, but that would not account for so few popular Australian novels being made into films. Where are all the Bryce Courtney adaptations? I am sure the cost of acquiring the rights would be steep – but you don’t think there’s not a market there for Tandia or Jessica (and yes I know Jessica was made into a mini series – but why not a film? After all Jane Austen gets made into films and mini-series?).

Underbelly was based on the book Leadbelly – why was it made into a TV series and not a film? This is not to disparage TV as a medium – heck Underbelly was great TV (the second series didn’t do as much for me), but there are a lot of real crime books out there now, why isn’t someone trying to be an Australian Martin Scorsese? Surely Underbelly could have easily been an Australian Goodfellas? What about the Sara Henderson? Surely her books like From Strength to Strength would make great films (or TV) – how many women over 40 have read her autobiographies? I’ll wager as many as have read Mao’s Last Dancer.

I think it is great news that the extremely popular John Marsden “Tomorrow” series of books are being made into a film. If done well I think they’ll be huge – internationally as well. Young adult fiction should be a gold mine for us. Looking For Alibrandi made $9 million, so why hasn’t Melina Marchetta’s next novel Saving Francesca been adapted? I see that Markus Zusak’s The Book Thief has been optioned by Fox 2000 for adaptation – great news if it happens – the book just got named 8th in the Borders Favourite 100 Books, so you can’t tell me there isn’t an audience in this country that wouldn’t  love to see it on the big screen?

So ok, I know it’s easy to pick book titles out and say “make it into a film”. Obviously producers have been thinking the same thing (or at least I hope they have), and perhaps the problem is publishers and authors are pricing themselves out of the market – because it’s not like any Australian n

ovels are being adapted overseas (despite the occasional talk that crops up about Matthew Reilly getting nibbles from Hollywood!). But something is clearly amiss.

I don’t know the why, I only ask the why not? Peter Carey’s Bliss won the Miles Franklin in 1981; in 1985 Ray Lawrence’s adaptation of it won Best Film at the AFI Awards.  The last Miles Franklin winner to be adapted was Carey’s Oscar and Lucinda  (which won in 1989!) – though I do acknowledge that the 1999 winner, Eucalyptus, was looking like being made until Russell Crowe had “script issues”. But still – only 2 adaptations since 1980 from our biggest fiction award? By contrast, 8 of the Pulitzer Prize winners for fiction have been adapted in that time.

As I say, I don’t have the answers as to why – obviously if it was easy there would be more adaptations (one would hope) – but the success of Mao’s Last Dancer demonstrates that when you start with a popular book, the audience will come (course it also helps to have Bruce Beresford behind the lens!) and it is something I hope to see more of in the future.

Perry Middlemiss at his excellent Oz Lit webpage has a list of Australian Film Adaptations. It’s well worth a look – if only to highlight how many there were in the 70s and 80s, and how few in the last 10 years.