Today the first Newspoll of the year came out. It showed the ALP had “slipped” from 56 to 54, and the LNP had increased from 44 to 46. Interestingly the LNP’s primary vote hadn’t changed a bit, which made some calls by the media that Tony Abbott has invigorated the Liberal Party base somewhat bizarre.

To be honest I thought it a tad weird that Newspoll were even polling at this time of the year – it’s holidays; no one gives a stuff. Heck I’m not even bothering to watch the 7:30 Report and I’m a card carrying politics nerd. Doing well in the polls now is like a footy team doing well in the March - it doesn’t really matter; all teams are really worried about is one of the star players getting injured.

Rudd has been on holidays for a couple weeks, and for the two weeks prior to that it was Christmas etc. Tony Abbott, on the other hand has been a bit of an energiser bunny, so I guess you’d figure that might account for some of the increase in vote, but probably not really – as the LNP primary vote didn’t increase at all.

Now obviously at 54-46, the ALP will win comfortably (in fact with an increased majority), but it’s not all smiles and sunshine for the ALP. Rudd’s satisfaction rating is on a bit of a slide. Possum over at Crikey has his usual great graphs. 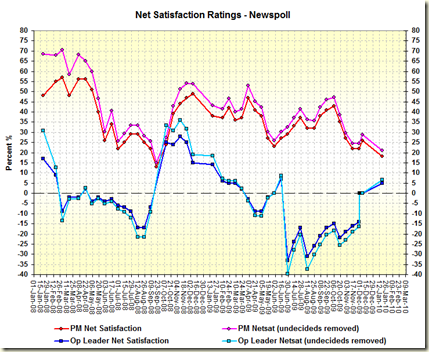 It’s pretty obvious that Rudd’s net-satisfaction rating has been dropping since October, and even in a long term sense since December 08.

On the preferred PM number however the difference is stark – Rudd leads 57% to 25%. In my second ever post in July 2008 I wrote:

Nelson is still in the teens when it comes to preferred PM, and I don’t think any poll will matter until the opposition leader is within 15% of Rudd on preferred PM. If Rudd stays above 50%, and Nelson or Turnbull or whoever can’t get above 35%, then the election will be a rout.

I still hold to that. Incidentally, the Newspoll two Party Preferred figure back then was 55-45, which just shows that the Liberal Party really hasn’t moved much at all in 18 months. (Though they have moved through two leaders!)