Today was the match in the Australian Open I had long been dreading since seeing the draw – the match where Roger Federer was due to play Nikolai Davydenko. The problem was it was a quarter final, and that Davydenko had beaten Federer the last two times they had played – the last time in straight sets.

The reason I had dreaded this game is not that Federer might lose a game, but that he might lose in the quarter finals and thus end the most amazing streak in sport – Federer’s run of 22 straight semi final appearances in Grand Slams.

Prior to the game Davydenko was talking up his chances – he was saying in the press that Federer was scared of him. And in the first set and a half of the match it looked to be true. Federer was horrible to watch, and Davydenko looked like a man who not only thought he was going to win, but considered it a matter of course. He was hitting winners, serving strongly and generally blasting Federer off the court. 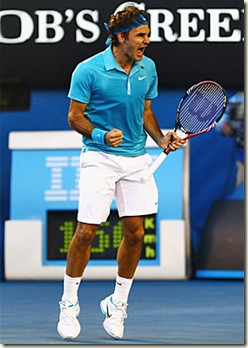 At this point Channel 7 in its wisdom decided to go to the news, Today Tonight and Home and Away. I went to watching the Australian Open scoreboard on the net. It was not good viewing. Federer lost the first set 6-2, and was down a break 3-1 in the second. At this point I noticed that my computer was running a bit sluggish and so decided to restart it as this often helps speed things up.

My computer then decided to freeze. Restart… freezes again… restart freezes again. I run Checkdisk… it takes forever to run. By the time I get the computer back working 40 odd minutes have past and I think oh well… maybe he might still be in it.. maybe the third set is still going.. maybe (but I know it can’t be – Davydenko was on fire; Federer, lousy… but where there’s life there’s ah bugger it let’s just find out the score…

And then I was as shocked as I have ever been in my time watching sport (and I didn’t even see it!). In the time that I had been buggering around with my computer, Federer had won 13 straight games. Thirteen in a row. How does someone do that? It’s hard enough to win thirteen straight when everything is going right in the world, but when you’re down and seemingly almost out? Amazing.

When I first saw the scoreboard Federer had a break point against him. I quickly switched it off. A few minutes later I checked again, he was down break point, and then lost. I switched it off, sure that I had jinxed him – he wins 13 games when my computer is down; when it comes back on he gets broken!! (Sport does these thing to people).

What followed was 20 minutes of hell as I checked back intermittently – he breaks back, is serving for the set.. he gets broken… he breaks Davydenko again… this time I don’t check back until I know the game will be over, and indeed it is: Federer prevails 2-6, 6-3, 6-0, 7-5.

The scoreboard does not do the feat justice.

And so the streak continues to 23 grand slams in a row.

How good is that streak? Well the second best ever such streak in men’s professional tennis is by Ivan Lendl of 10. Ten! That is, only 43 percent as long as Federer’s streak. The best ever since Federer began his streak is that of Nadal and Djokovic who have both got to 5 grand slam semis in a row before missing out. Here’s how hard the streak is: from the 2009 French Open semi-finals, other than Federer only Juan del Potro has made another semi final (and del Potro has only made one), from the 2009 Wimbledon semi-finals, none other than Federer made the US Open semi-finals, and only Andy Murray has been able to get to the semi-finals of this tournament.

But to really appreciate just how amazing his streak of 23 in a row is, we need to look at how many players have made the 23 semi finals in that time.

Since Wimbledon 2004, Federer has made 100 percent of the 23 semi finals; in effect his batting average is 100. The next best player (not surprisingly) is Nadal: he has made 11 of the 23 – or 47.8%. That gap is literally Bradmanesque (in fact better than Bradman). The next best are Novak Djokovicand Andy Roddick, who have each made 7 semis (30.4); and then Hewitt and Davydenko with 4 each. Four! Or in other words they have averaged getting to the semi finals of Grand Slams only 17.4% of the time – or worse than once every 5th Grand Slam.

In the time since Federer has started his streak 33 different players have made the semi finals of a Grand Slam. Names like Henman, Agassi, Bjorkman, Ljubicic, Tsonga, Verdasco, Haas, Nalbandian, and most recently Marin Cilic – essentially 3 generations of players.

And in that time only he, Nadal and Djokovic have made the semi finals of each of the Grand Slams (no small thing in itself – Sampras only made the French Open semi once). Djokovic has done the “career semis-grand slam” once (he’s only got to the Wimbledon semi-final once); Nadal has done it twice (has only got to the Australian and US Open semis twice each); Federer has done it five times – the worst he has done is the French Open of which he has “only” made the semi-final five times – the others he has reached more than 6 times.

So yeah, sure Nadal has a winning record against Federer, but let the maths do the talking. When you’re looking at careers, it’s Federer first, daylight second.