The Silly Season is still in full swing, and Tony Abbott, in the spirit of the time last night went on the 7:30 Report to have a chat with Chris Uhlmann.

In the interview there was this interesting exchange:

CHRIS UHLMANN: Have you wasted the last two years, the Coalition that is?
TONY ABBOTT: I think we've gone through a necessary period of introspection. I now think we've got our act together. I think we're holding the Government to account and I think we're developing credible policies. And that's why I think it is realistic to think that we can win the next election.

I never knew a necessary period of introspection meant complete meltdown. I’ll also leave it to you to ponder on the “credible policies” the Liberal Party are developing, because I can’t think of any off hand.

This was followed up by a complete howler by Abbott – the kind that will have Rudd, Gillard, Tanner et al all salivating at the thought of Question Time starting in February:

CHRIS UHLMANN: But you would have spent money as well. The Coalition actually backed the first stimulus package, didn't it?
TONY ABBOTT: Yes, which was about a quarter the size of the second stimulus package, which we opposed.
CHRIS UHLMANN: But certainly that money was necessary and it appears to have done the trick.
TONY ABBOTT: But at high price. And if you look across the Tasman, New Zealand has done just as well it seems as Australia without going into anything like the same level of debt and deficit that we have.

As soon as I heard this my ears pricked up merely because I don’t think I’ve ever heard an Australian politician saying we should try to be like New Zealand – let alone economically. 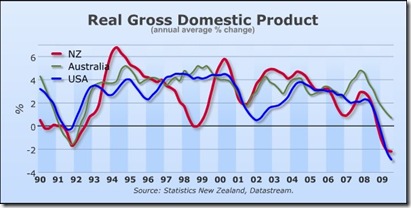 Fairfax’s economics reporter, Peter Martin, certainly was listening and he quickly posted a blog which points out that NZ went into recession and had “five consecutive quarters of negative growth”. He also showed this nice graph to highlight how little we should want to be like our Tasman cousins:

As you can see, New Zealand from the start of 2008 began going south at a very quick rate – in fact rather in line with the ground zero country of the Global Financial Crisis, America.

Australia certainly has been falling as well, but we’ve stayed positive – a big bloody achievement when you look at the rest of the world.

But heck, let’s not just look at New Zealand’s employment growth. How about its unemployment level.

Here’s a graph plotting NZ’s unemployment over the past fifteen years. Take a look at the big spike since the start of 2008 – it has gone from around 3.75% to now be sitting at a nine year high of 6.5%.

Yep Tony, I really wish we had been more like New Zealand.

CHRIS UHLMANN: Well Tony Abbott, we know what you're against. What are you for? What would an Australia with Tony Abbott as Prime Minister look like?
TONY ABBOTT: Well perhaps people who are in some doubt ought to read my book Battlelines, which came out last year.

That is perhaps the most bizarre response to that question from a prospective PM I have ever heard.

Read my book? What the hell?! Is he Leader of the Opposition, or is he an author on a book publicity tour?

And unfortunately, as Andrew Carr has written, Abbott’s book doesn’t actually set out much of what Abbott stands for but is instead a rather lightweight compilation of contradictory arguments and motherhoody statements.

Uhlmann then finished by confronting what I think is Abbott’s biggest difficulty:

CHRIS UHLMANN: Finally and very briefly, Kevin Rudd, is it personal between you and him? You don't seem to like him very much.
TONY ABBOTT: Look, he is my opponent and he might be the best bloke in the country.
CHRIS UHLMANN: You doubt that.
TONY ABBOTT: He might be a fantastic author of children's books. The fact is he is my opponent so I am not in the business of looking at his good personal qualities. I am in the business of exposing his poor political qualities.

Thus Abbott keeps up his one hundred percent hit rate of including in an interview a personal stab at Rudd – this time having a go at Rudd’s children’s book, Jasper and Abby and the Great Australia Day Kerfuffle, that he has co-written with Rhys Muldoon (the proceeds of which go to the Royal Children's Hospital in Melbourne). Abbott absolutely hates Rudd. He always has and he has always believed the the Australian public will soon come round to agreeing with him.

The problem for Abbott (apart from his tendency to make dumb economic statements) is that the voters still like Rudd. He would be much better off to cut out all the sarcastic references about Rudd and come up with some “credible policies” – because in a head-to-head personality contest against Rudd, whether Abbott likes it or not, he will get flogged.

Good post Grog. I thought the book comment a little strange too.
Uhlmann tried, but he is no Red Kerry. A good interviewer would have torn strips of Tone for some of those piss-weak responses. But I'm sure we will see them all rehashed and thrown back when Parliament resumes. And no doubt there will be a host of ads about 'being more like NZ' come election time. Pictures of baskets come to mind.

Abbott may not realise that Rudd's public persona is too bland to be hated by the general public.

I am all for bland politicians. (I'd almost rather have a tank of goldfish in parliament than what passes for politicians in Italy, for example.) They are like models, the personalities don't get in the way of what they are selling, it is easier to clearly see the product.

The reason I almost never trust flamboyant pols is that, my dislike of personality cults aside, people are fooled into believing the message being projected rather than what is really going on. Willing to be fooled too. Children overboard, people *knew* it wasn't true, and they didn't care.

I'm not saying Abbott will NEVER be prime minister (I said that about Howard back in the 80s, oops). The problem with relying on personality is that people can easily be galvanised to hate you, it's harder to get them to love you. Unless you do something really cute and/or manly, like cry in public, rescue a kitten from being run over by a truck, or have a REALLY hot wife or GF---I was gender specific because that one doesn't seem to work for straight female policians, it might work for lesbian ones tho :)