Avatar sets a record for the 21st century

Last month I did a post about the difficulty for films to rely on word of mouth to build up a following – citing the Box Office Squeeze of big films, which meant there were now more different Number 1s each year at the box office than ever before.

Since then of course Avatar has been number one. In fact by winning the last weekend, it meant it had been Number 1 for five straight weeks.

My theory blown to bits I guess.

Actually, not a bit, because you see in getting to the five week straight mark, Avatar did what no other film has done this century. Not done by The Dark Knight, nor any of The Lord of the Rings films. The last film to be Number 1 for at least five weekends straight in the US was The Sixth Sense in 1999. The most recent film before that was Titanic in 1997-98 (it was at Number 1 for 15 straight weeks). Before that there were none until 1993. So in the past 16 years there have been only three films to have gone at least 5 weekends in a row at the Number 1 spot.

So how does this vindicate my assertion of the Box Office Squeeze? Well in the twelve years from 1982 to 1993 (inclusive) there were 21 films that made the 5 week in a row mark. There was not one year in that time span that did not have at least one film to reach that mark, and six of the years had more than one. 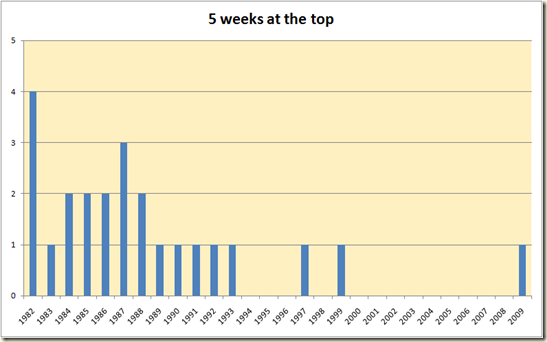 So what were these massive blockbusters of the 1980s that got to five weeks? Try Mr Mom, The Secret of My Success, The Golden Child, Stakeout. Yeah you’ve heard of them, and most likely even seen them, but when you think of them do you think of them as being as popular as Avatar is now?

But look, 5 weeks is probably being too tough – after all if even The Dark Knight can’t get there, then perhaps I’m setting the bar too high. So let’s look at the same time period but this time we’ll allow films that made it to just 4 weeks in a row at Number 1.

This figure allows us to include such films from this century as The Dark Knight, The Return of the King, The Fellowship of the Ring, National Treasure 2, Castaway and Meet the Parents. 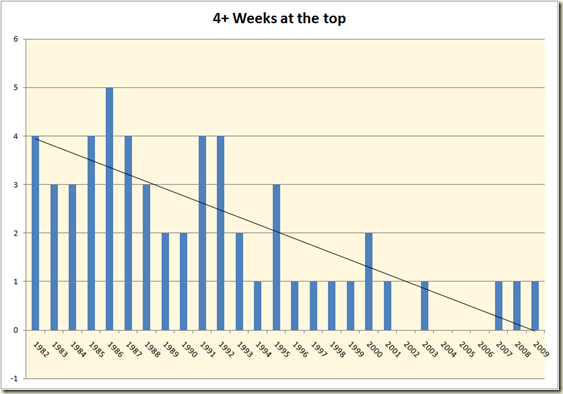 (The line has been put in for those of you struggling to see if there is any trend!)

So what type of films in the 1980s got to 4 weeks in a row at Number 1? Try blockbusters like Uncle Buck, Beetlejuice, Rambo 2, Police Academy 2, Karate Kid 2, Tightrope, Never Say Never Again. Heck even in the 1990s such films as The Legends of the Fall, The Hand that Rocks the Cradle and Under Siege were able to do what Spiderman, any of the Harry Potter films, the Pirates of the Caribbean films, or Shrek 2 or 3 were unable to do in the 21st century.

So were will Avatar end up? Opening this week are Tooth Fairy (starring The Rock) and Extraordinary Measures (a drama with Harrison Ford). Both are expected to only take around $15m-$18m this weekend. Avatar made $41m last weekend, so it should get over the line.

If it gets past this weekend, next up is is Mel Gibson’s latest – Edge of Darkness (predicted to make around $20m in the opening weekend). The following weekend we see the thriller From Paris with Love (predicted to make about $15m), then there is on the Feb 12 weekend the US’s answer to Love Actually, Valentines Day (it looks God awful, but for some reason the pundits think it’ll take around $35m in its first 3 days) and also a kid friendly film Percy Jackson & The Olympians: The Lightning Thief.

So it’s likely Avatar will get to 6 weeks straight at number 1, and even a chance of making it to 7 or 8, but by then it’s expected normalcy will resume.  And its chances of making 15 weeks like Titanic? Fuhgedabouditt.

Though somehow, I doubt James Cameron will care.
Posted by Greg Jericho at 8:56 PM