The Australian Open: Embarrassing No More

When I was growing up I hated the Australian Open. 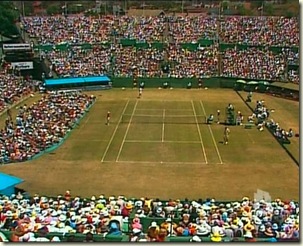 Up to it being moved to Melbourne Park in 1988 the tournament represented just about everything I hated about Australia. It was old, backward, provincial and boring.

God I hated  Kooyong. Even now I find it difficult to watch the “Kooyong Classic” as the site of those stupid boxes on the side of the court bring all the feelings of despair. Just look at the photo on the right – you can see the “centre court” is anything but – the stadium is little more than some stands that seem to have been erected just for the occasion. The light blue boxes for some old-fart officials and dignitaries to sit in just look embarrassing. There are people sitting on the court in temporary seating (hiding the fact that at other times of the year there are three courts in the “centre” court). The whole thing smacks of some slightly above average Sunday School picnic.

In 1987 my family went to a day at the Open – it was the last year it was held at Kooyong. I recall watching Ivan Lendl beat Dan Goldie in 4 sets. I found out from wikipedia that this was a fourth round match. My main memory of the occasion is that there were a lot of empty seats, and there was a complete lack of buzz in the air. I think I was more excited the day I watched my dad play on the centre court at Memorial Drive in the annual South Australian tennis country carnival.

That’s because the Australian Open was bloody boring – nobody bothered to come. Lendl only came once Tony Roche started coaching him and only because he wanted to win a tournament on grass – and even then the event was essentially a practice for his efforts at Wimbledon later in the year.

The event was so boring and lacking in any stars that in both 1981 and 1982 Johan Kreik beat Steve Denton in the final. Both players only ever played in 2 Grand Slam finals. In 1982, things were so bad that Kriek (whose highest ever ranking was 7) was the top seed, Denton was the 2nd seed. Mark Edmondson was the 3rd seed! It didn’t even have a full field of 132. There were only 96 in the field so some players had a bye in the first round. By comparison in ’81 and ’82 Borg and Wilander won the French Opens, and Wimbledon and the US Opens were won by McEnroe and Connors.

God knows why or how it remained as a Grand Slam.

My guess is the Swedes helped. Mats Wilander and Stefan Edberg came to play when they were at the top (both of them shared the event from 83 to 88), which got the event through the 80s until 1988 when it went hard-court and everyone started to come and play. The list of Men’s champions from the 90s is testimony to how improved the tournament became: Lendl, Becker, Courier, Sampras, Agassi, Kordr, Kafelnikov. Aside from Kordr each of them was a Number 1 in the world, and Lendl, Becker Sampras and Agassi are pretty much safely seated in the penthouse suite of the tennis pantheon.

The Australian Open now is a thing of magnificence. Bill Simmons, the ESPN’s “Sports’ Guy” has written in the past that the Australian Open is the equivalent of the US PGA Golf tournament – ie the 4th major. Such thinking though is a couple decades old. No one now (or in fact for the last 21 years) ever misses out on the Australian Open – many players now come here hoping to be the year’s dark horse who breaks out and goes up a level – think Baghdatis, Tsonga, even Djokovic – as opposed to the olden days when journeymen players would come here thinking they could sneak an easy Grand Slam. 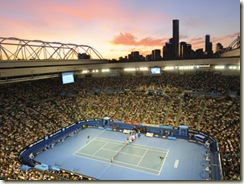 In some ways the Australian Open is now the hardest of the Grand Slams to win, because as it is right at the start of the year it catches some players not quite prepared, still a little sore from the previous year, perhaps a bit stale from not enough tennis, and they suddenly find themselves facing some guy who is determined that this new year is going to be his year to zoom up the rankings – the US Open can be seen by some as a last chance to salvage something out of the year, which is a different intensity altogether.

The surface is also slower than the US Open, and thus the clay court players are more comfortable – meaning all 132 are very much on a level playing field.

But let’s compare the winners over the past decade at each of the Grand Slams to see if there is any reality to the “4th Grand Slam” tag. In colour are those players who have not won any of the other three slams:

Not a hell of a lot of flab in that lot. Johansson won in 2002, which was a weird year in tennis. Hewitt was number 1, but not really dominating, Sampras was almost gone, Agassi who had won the two previous years was out injured, and Roger Federer (seeded 11) had yet to realise that he was Roger Federer. Johansson had a dream run – he was seeded 16, but due to results the only time he played an opponent seeded higher was in the final, when he beat Marat Safin (seeded 9). It should be remembered that this was the year Hewitt got knocked out in the first round. So yeah,Johansson had a fair bit of luck. As for Djokovic; well he hasn’t won any other Grand Slams yet, but as he beat Hewitt, David Ferrer (5th seed) and Federer on the way to winning the title, I doubt anyone would call that a soft win.

Kuertan was a great clay court player, but his best performance at the other Slams? The quarter finals of the US and Wimbledon. I’m betting most of you can’t even recall Gaudio. He won in 2004, which is important really only because it was the last time Roger Federer didn’t make the semi finals of a Grand Slam (yep that is 22 slams ago). The French Open  is such a niche event that it rules out over half the field before it begins. Unfortunately the European section of the ATP tour has been allowed to grow to absurd levels, and now clay court specialists can rise up the rankings, despite being all at sea on the hard-courts.

People want to win the French Open of course. But do you think someone like Andy Roddick, or Andy Murray or even Lleyton Hewitt goes to bed at night dreaming that they’ll win it? I doubt it. They play it of course, but only because of the ranking points involved, and out of blind hope that something might go well. But to them, it’s a tournament to be endured.

This is a class field (and it still hurts that it is Goran there and not Pat Rafter). Sure it’s on grass, and sure no one plays grass anymore. But you have to go back to 1996 and Richard Krajicek before you come across a Men’s Champion who wasn’t up there with the best for a good portion of his career. Sure clay court players struggle – but as Borg and Nadal showed, if you’re good enough, you’ll be good enough. And with the racquets nowadays and the resultant loss of serve-volley as a weapon it isn’t as bad for them as in the past, so arguably it is easier for a clay court player to win at Wimbledon, than for a big serving hard-court player to win at the French Open.

Another good lot. Roddick was blighted to be born at the same time as Federer; and del Porto, like Djokovic, is likely to add to his tally (or not – but even then he is certainly not a nobody).

Basically now all four are equal – none is easier than the others, none suffers from too many weak champions (though the French will always have more winners who will never win on the faster courts).

This year’s Australian Open, starting on Monday, looks to be one for the ages. If Federer is to keep up his streak of semi-finals he will have to play great tennis from round one, as he is slated to meet the number 36 in the world Igor Andreev, then he may have to play Hewitt, Giles Simon or Marcos Baghdatis just to get to the quarter finals, and there he is due to meet Nikolay Davydenko who beat him the last two times they met (the latest just a couple weeks ago). It is a hot, hot field. (The women’s event will also be heavily contested, but I’ll admit to finding women’s tennis frustrating to watch – for the love of God could somebody hold her serve???).

So for the next fortnight, I’ll be losing as much sleep as during Wimbledon (why do night matches at the Australian Open night matches always seem to go for 5 sets?), and watch all the players put absolutely everything on the line in the hope of snaring one of the four greatest titles in the world – and no one will be thinking if he should lose – oh well it’s just the Australian Open, it doesn't really matter.