Well today at 11:30 the ABS released the National Accounts, and wow!

One of the reasons the annual growth is so huge (and unexpected) is that today’s figures showed a few revisions on past numbers.

The growth in both the September and December quarters of 2011 were revised up 0.2% – thus adding an unexpected 0.4% to the annual growth. Incidentally the ABS now measures the GDP decline due to the QLD floods and Cyclone Yasi in the March 2011 quarter as having been a fall of 0.5% compared to the previous measure of 0.3%.

But no one saw the 1.3% quarterly growth coming. 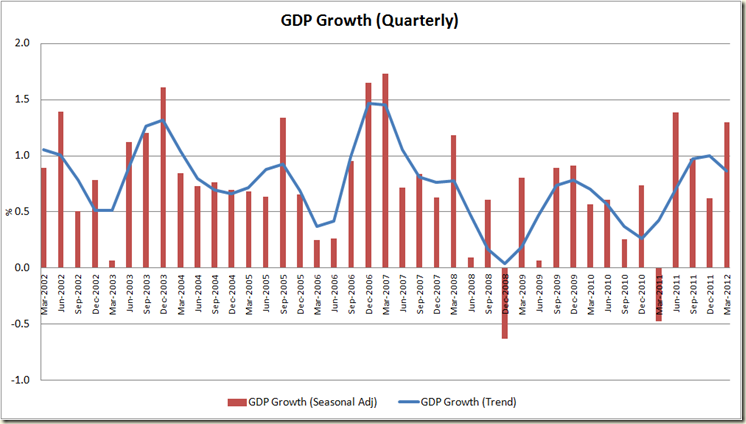 And the year on year growth figures show just how well we’re doing now compared to the past (let alone to the horrible economies in Europe and the USA – the USA first quarter growth showed an annual growth of just 1.9% – less than half our growth) 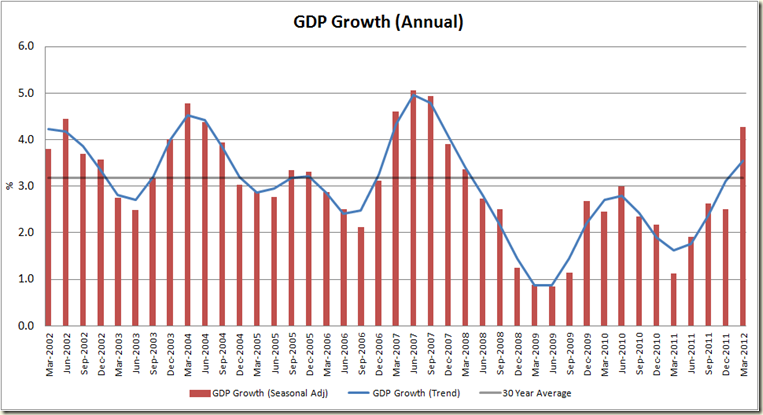 The seasonally adjusted figure does look to be above the trend – but remember the trend figure will be revised in future months to take account of it.

Bear in mind as well that the Budget estimated the 2011-12 GDP growth would be 3%. To achieve that level of growth, the June quarter only needs to grow by 0.1% (assuming no downward revisions).

Today’s figures certainly justify Wayne Swan’s decision to move the budget back into surplus, as the 12 month growth of 4.3% is well above the 30 year average of 3.18%.

So where was all the growth? Well a look at the growth in State Demand over the past 12 months shows WA and QLD are leading the charge:

Yes WA grew by 14% in the past year (and it includes a fall in state demand in the December quarter).

The non-mining states grew below the national GDP average growth (slightly in the case of SA and Vic), but Tasmania remains the only state truly missing out on any benefits of the boom in terms of growth.

The figures also showed that the Terms of Trade had declined, which is largely in line with what was predicated in the 2012-13 Budget – though perhaps a bigger fall than expected 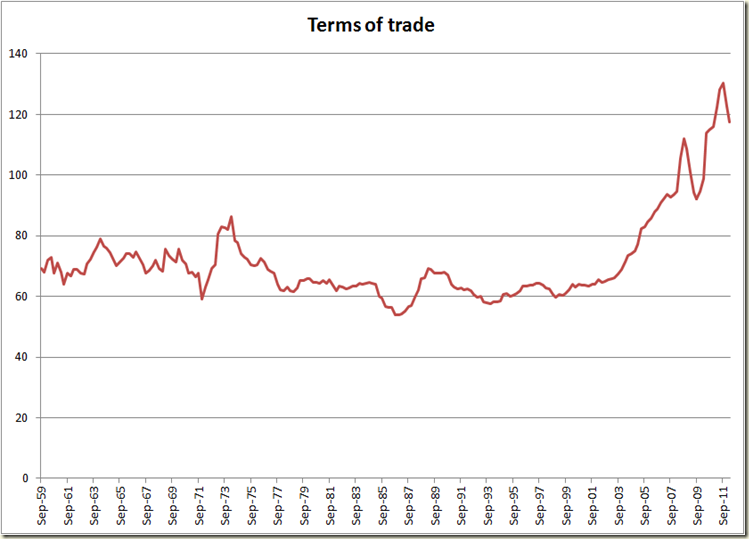 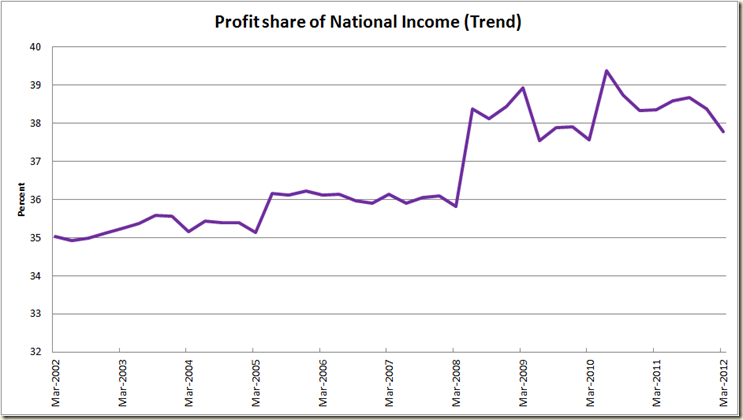 And thus as well the compensation of employees share of income also increased. 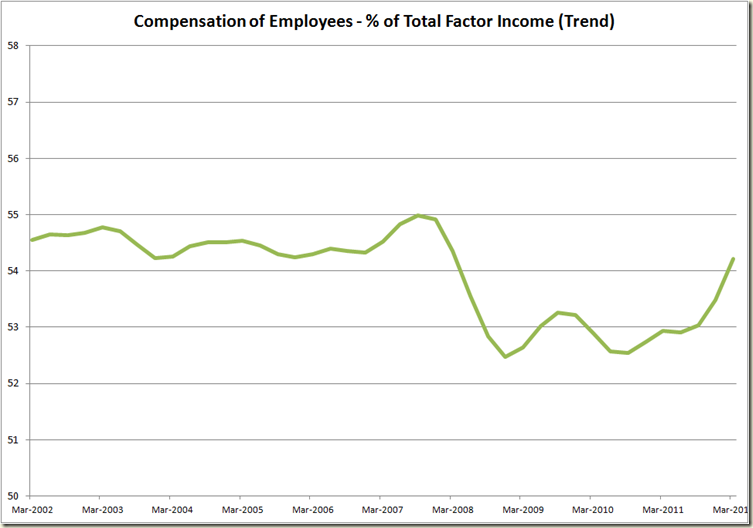 This also fed into the rise in real-unit labour costs. But before you start thinking “wages breakout” remember the Wages Price Index released last week – it was on average for the past 10 years. 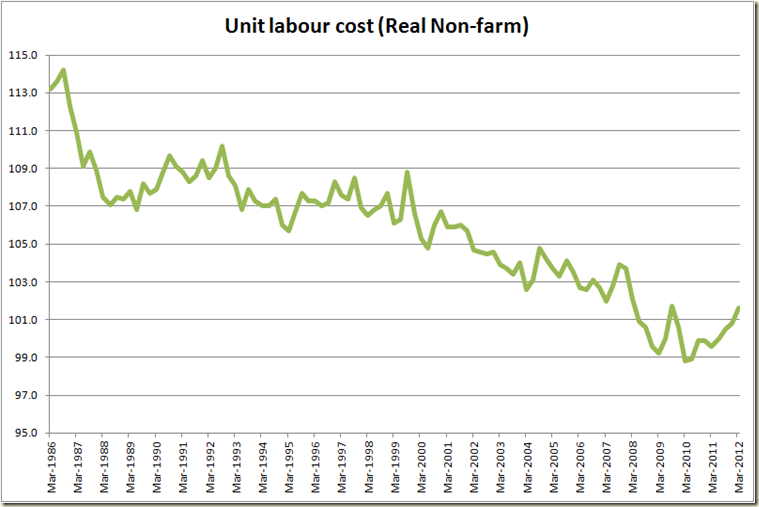 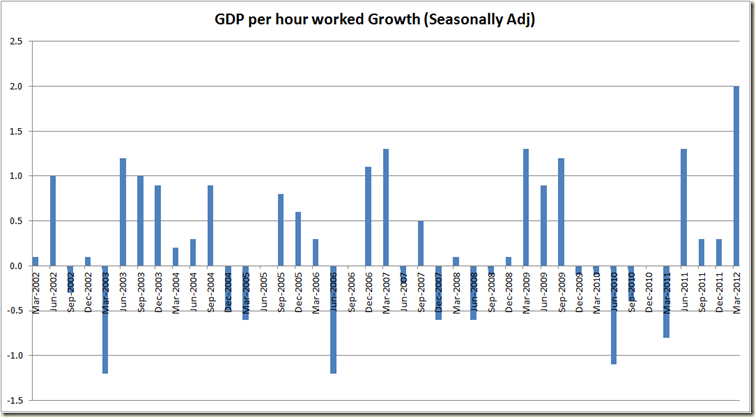 All in all, when tomorrow’s Industrial disputes figures come out for the March quarter, recall this increase in productivity over the past 4 quarters is a very solid 3.9% – the best 4 quarter growth since December 2001. 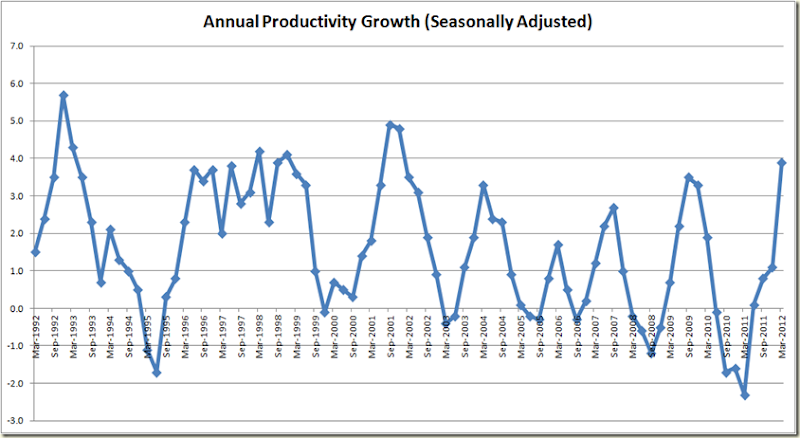 So why is this great news not reflected in all of us walking around feeling rich? Matt Cowgill noted the difference between real net disposable income and GDP Growth: 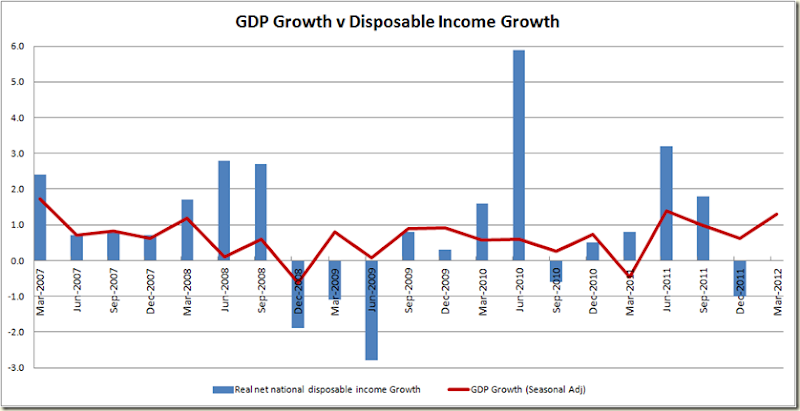 Disposable income growth was flat in the last quarter and was negative the quarter before that, but in annual terms, net disposable income is 4.0% – pretty much in line with the 4.3% GDP growth.

So I think it is more likely we are still scarred by the GFC, we still see horrors in Europe and elsewhere and thus we remain in the post GFC world of spending and saving: 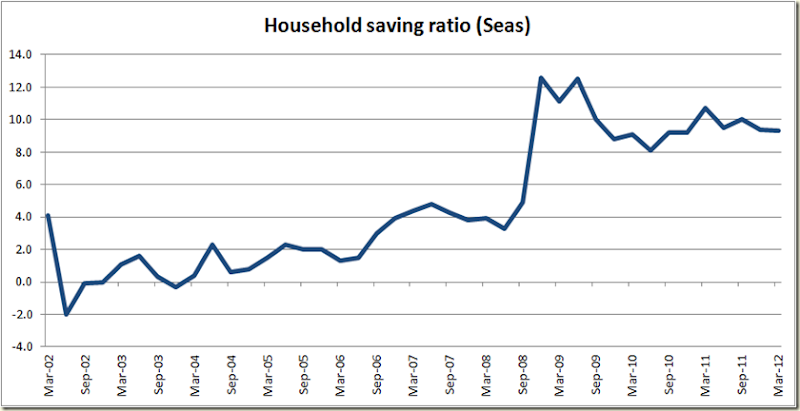 This attitude has fed into the low inflation and thus low interest rate economy we find ourselves. There’s nothing wrong with this – in fact, it is a great long term place to be.

You don’t get much better than that.

"The scariest thing in Australia is Wayne Swan. Imagine how well our country could do if we had a good Government.”

Or, in other words, these good figures prove the Government is bad.

Yeah, GDP growth might be increasing, but logic sure as hell ain’t.

So much for the mining industry going to the dogs..

Poor Joe Hockey, he could've just said nothing but instead felt it necessary to open his fat god and prove just what a prize boofhead he is.

It's the GDP(I) figures that matter for the surplus in 2012-13. And the dip in the GOS numbers will be hitting revenue around about then.

Yes Anon, not suggesting these figures will play into next financial year and the 2012-13 budget, but more a point about those who thought the budget predictions were on the optimistic side.

It looks very much like the Treasury has underestimated GDP growth for this year.