As well as the Labour Force Data, the ABS today also released the latest figures for Industrial Disputes.

The problem with looking at individual industries is we only have the figures for back to 2008, and even those are pretty sketchy for use of getting a real picture of the economy, as the graph below shows: 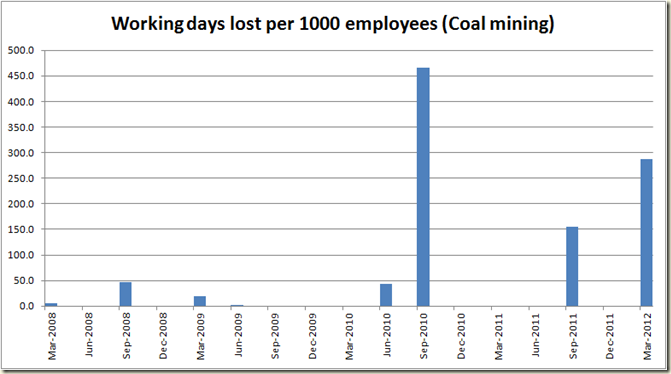 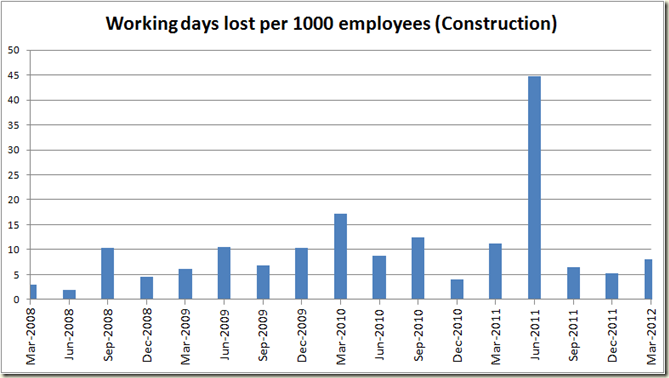 So instead let’s look at the whole economy. First the quarterly figures: 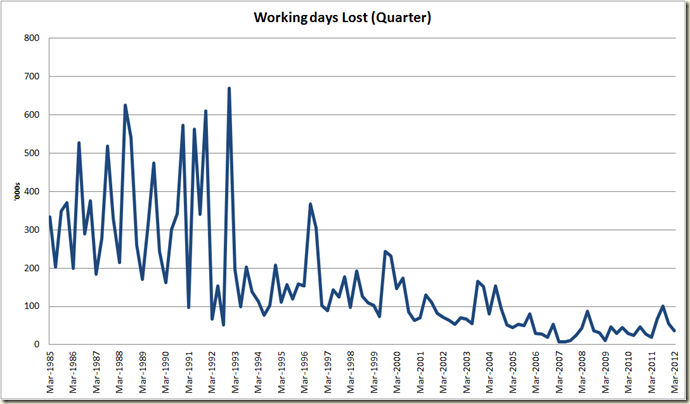 OK let’s realise that those commentators who want to get back to more “flexible” IR will spin these, so let’s go in a bit closer and look at the past 10 years, to get rid of the 1980s-90s noise: 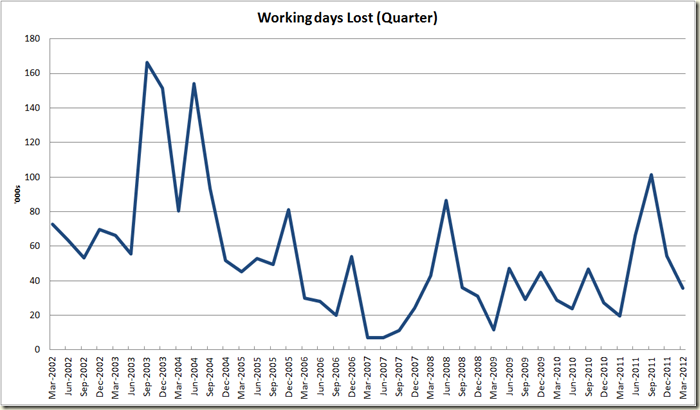 Yes there has been a rise if you take it from the bottom point of March 2007. But realise that the June 2008 peak was also under WorkChoices as well. If you look at the past 7 odd years, it’s all pretty much a flat trend. 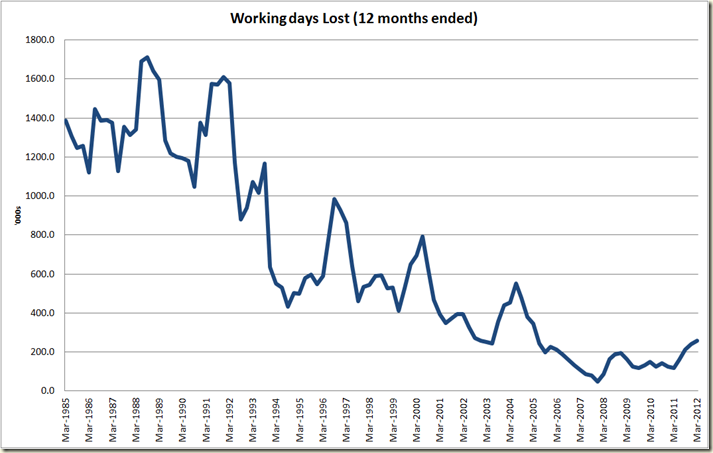 This shows an increase and a look at the past 10 years reveals it as well: 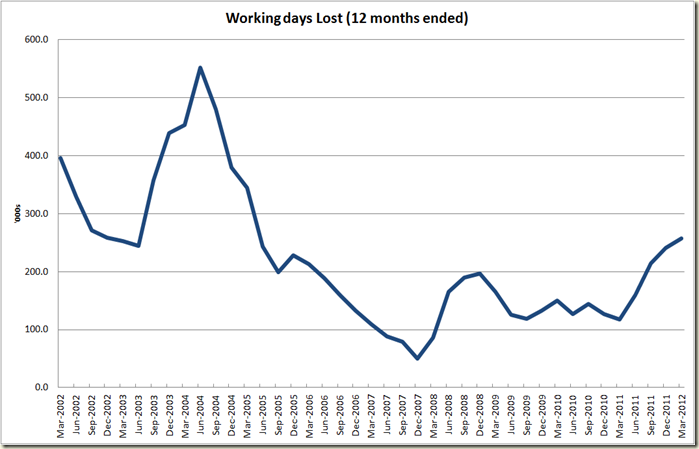 But a comparison of the quarterly and annual figures shows the annual amount lags behind the quarterly number, so the increase is not surprising, given the peaks of the : 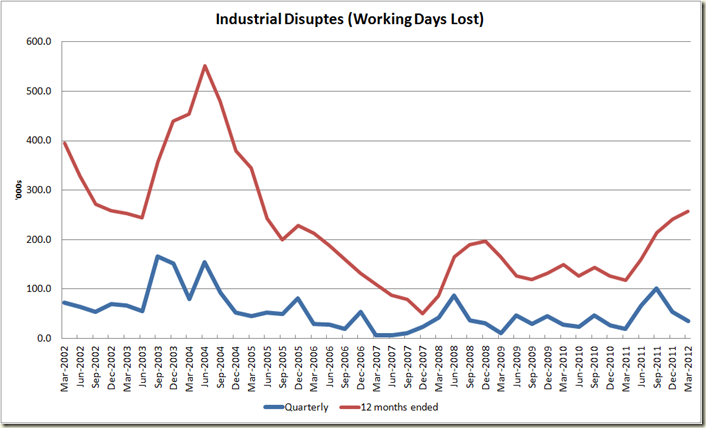 But ignore that if you want to tell us the world is coming to an end.

A look at the number of actual disputes (as opposed to work days lost) is also rather revealing: 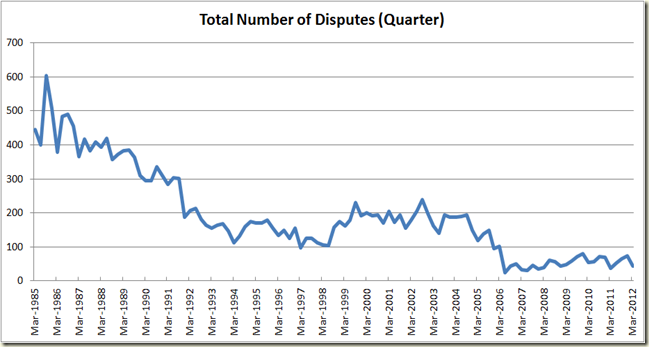 Again even the past 10 years give pause to claims Australia has become an industrial battlefield: 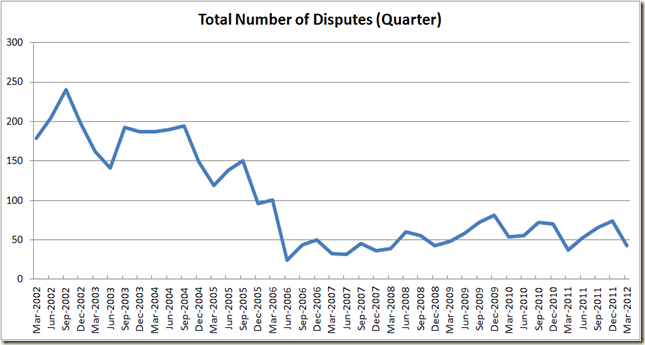 Or how about the number of employees involved in disputes: 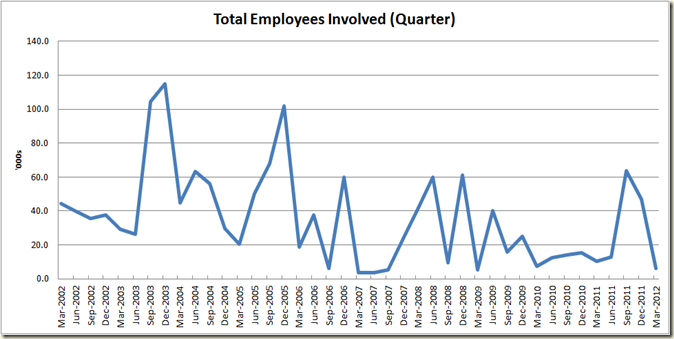 Not much evidence of militancy there either.

And also bear in mind that yesterday the National Accounts showed and increase in productivity.

My prediction – there’ll be a focus on the coal mining figures and on the increase in the 12 month rate – oh and a heavy reliance on anecdotes.

"WORKING days lost because of industrial action have more than doubled in the past 12 months to the highest level in seven years,"

I think thats SNAP to Grog.

Greg, are these figures private sector only or all sectors?

The reason I ask is that the vast majority of strikes that I hear about (noting that caveat) appear to be teachers or nurses. Not saying they don't have a good argument, but if you took away public sector lost hours, would there be any significant private sector loss?

It's oh so predictable ain't it imacca?

Anon, yep they're for all sectors - it;s why last year when there was big strikes in NSW public service (from workers not covered by the Fair Work Act) much of the commentary on numbers of disputes was rather misguided.