This afternoon the startling news was released that China will continue to censor the internet during the Olympics. In other 'hold the press' news, attractive people have been found to be more popular, cigarettes can kill you, and Elton John prefers the company of men.

Now, I love the Olympics. I can remember getting a medallion to commemorate the Montreal Games in 1976 – which, as I was only 4 at the time, is getting close to one of my earliest memories - before the 1980 Games I was enthralled by watching the Bud Greenspan “Olympiad” documentaries (sadly not on DVD), and I was probably the only 10 year old going around whose idol was Emil Zatopek.

But the Beijing Games are making it hard for people to stay in love with the Olympics.

Beijing was chosen as the Olympic host on 13 July 2001. It had long been Juan Antonio Samaranch’s dream for China to get the Games (mostly, it is suggested out of his hope to win the Nobel Peace Prize – which would've been quite a feat for a former Minister under the Franco regime).

It was almost literally the last decision to occur during his reign as head of the IOC; on 16 July Jacques Rogge took over.

Rogge must have wondered what he had done to deserve it.

The IOC Evaluation Committee Report on the bidding cities makes great reading. Here’s the sole entry in the report on the issue of human rights:

As stated, the Commission has a defined technical evaluation role but it is impossible to ignore the public debate on political issues such as human rights which, in the present context, is imposed on sport. The Commission will not deal with this issue other than to acknowledge the existence of the debate and its continuation. Members of the IOC will have to reach their own conclusions.

Wow, "reach their own conclusions" – we’ll give you a report on whether we think traffic congestion will be a problem, but are there any problems with brutal suppression and political murders? Dunno, make up your own mind – you've got the internet, why don’t you google it? Of course just don’t try and google it in Beijing. It won’t work.

Here’s what the report said about media during the Games:

It was confirmed to the Commission that there will be no restrictions on media reporting and movement of journalists up to and including the Olympic Games.

Here’s how that phrase is being interpreted now:
“Our promise was that journalists would be able to use the Internet for their work during the Olympic Games,'' said BOCOG Spokesperson Mr Sun. “So we have given them sufficient access to do that.''

So you can send an email, just don’t try and look up anything about Amnesty, Tibet or even the BBC.

But look we’re all getting in a tiz over this, after all the IOC has Kevin Gosper on the case. He says he plans to discuss it with the Beijing authorities. Bet that'll do it. After all if you wanted someone to defend freedom of access and the media, you would choose the guy who described the Torch relay protestors as people who “just take their hate out on whatever the issues are at the time”.

And here’s what Gosper said on the 7:30 Report back in March on the internet restrictions:

"...when games time comes and there's 25,000 members of media, as you say, I would expect the Internet to be free and I would expect that all journalists and radio operators and broadcasters will be free to operate as they would have been in Sydney."

I’m guessing they’re going to struggle to meet that marker.

But then it’s par for the course for the IOC, here’s how the report described the Chine’s political system:

The Beijing Municipal Government provides state administration at local level. The political system is classed as “working for China”.

Now there’s a phrase to warm your heart.

Here’s some more gold from the report:

Beijing currently faces a number of environmental pressures and issues, particularly air pollution. However, it has an ambitious set of plans and actions designed and comprehensive enough to greatly improve overall environmental conditions.

Hmm, wonder how they’re making out? 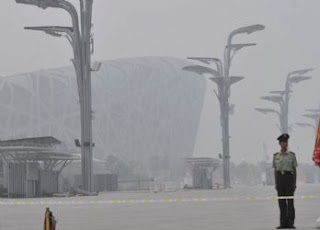 And the conclusion of the committee?

It is the Commission’s belief that a Beijing Games would leave a unique legacy to China and to sport and the Commission is confident that Beijing could organise an excellent Games.

Toronto came second in the voting; I’m betting there’s a few in the IOC wishing they could have a re-count.

I love the Olympics and will watch them avidly; but really, London 2012 can’t come soon enough.
Posted by Greg Jericho at 7:08 PM