Well the US Election is under 24 hours away.

It's all over of course - Obama will win it easily (as smart people predicted a while back! - hey my horse in the Melbourne Cup ran nowhere so I'm going to milk picking Obama for as much as I can).
Today's Gallup Poll has Obama up 53-40 with registered voters, and up 53-42 with likely voters.
As voting is not compulsory, polling companies always have to try and work out if the person they are asking will actually vote. It also means the political parties not only have to convince the voters to support them, they have to do all they can to get them to the polling booth.
Of course the overall percentage doesn't matter a great deal - what is important is the electoral vote count. In the Presidential election, each state gets a certain number of "electoral college votes" based on the population of the state. So California gets 55 votes; New York 31; and little Alaska gets only 3. All up there are 538 votes, so 270 will give you the keys to the White House. 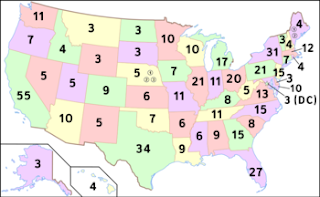 In all 50 states, except for Maine and Nebraska, it's a winner takes all system. So if you poll one more vote than your opponent in California you get 55 votes, your opponent gets zero. It's for this reason that the 2000 election was so controversial. Bush beat Gore overall by 271 electoral votes to 266. Bush won Florida by 537 actual votes - or 0.0092% of the total votes cast in that state. Had Gore won Florida, he would have ended up with 291 electoral votes, Bush - 246; and the world would be a much different place.
The polls at the moment have Obama winning around 278 electoral votes without too much trouble. McCain looks likely to be able to count on 132. There are then 138 electoral votes up for grabs in states where the polling is a bit closer. Most of these are predicted to split 50:50 with Obama ending up with 338 to McCain's 200.
Over on intrade - which has people buying "shares" in Obama or McCain, the prediction is Obama winning 364 - 174; (and incidentally that is my prediction as well).
By comparison Clinton beat Bob Dole in 1996, 379-159; and he beat Bush Sr in 1992, 370-168. So it won't be record breaking win by any means but comfortable nonetheless. Reagan of course is the king of elections. In 1984 he beat Walter Mondale 525-13 (Mondale only won his home state of Minnesota). Mondale's VP candidate of course was the first female to run for the office, Geraldine Ferraro.
So that's it. All over bar the actual running of the thing! His inauguration address should be a corker. But will he be any good? Who knows really. Here's hoping.
And to go out with, here's a great clip that was shown on last Sunday's Insiders. It is a brilliant editing of the 3 Presidential debates, and it is worth remembering the next time an opposition leader demands more than one debate before an election.
Posted by Greg Jericho at 3:45 PM