Too Many Books, Not Enough Eyes

Last night I made a foolish error and paused at one of my bookshelves and instead of just looking at the books and trying to decide what I would read next, I counted how many books on the shelf I hadn’t read. When I got to 28 I stopped. At that point I was still amongst the familiar black spines of the Penguin Classics. It was no consolation that there are more books on my shelves read than there are unread. What it meant was that I had to face up to the fact that the book buying spree I have been on for the past 12 years has finally got the better of me.

OK maybe it reached that point a while back, and I was too stubborn to accept it, but I know in the last year or so I have been buying books pretty regularly – mostly from second hand stores, and while some I would read straight away, for every one of those, would be at least one (or two) that got put on the pile. 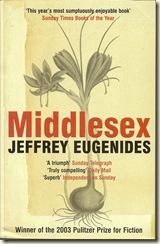 Take Jeffrey Eugenides’ Middlesex. I have been meaning to buy it for ages, but not enough to pay the price that it costs at the local Borders – and it’s not the type of book that gets on the K-Mart shelves at 20% off.

But a few weeks back I found a great, good as new copy of it in my favourite second-hand book store for $8. So now it sits on my bookshelf waiting for me to read it. Do I think I was wrong to buy it? No – it’s there and I have to admit it is near the top of my “I think I’ll read that next list”. But the sad part is that Middlesex isn’t included in that group of 28 that I counted last night. Neither is Murakami’s The Wind-Up Bird Chronicle, Rushdie’s Midnight’s Children or Orhan Pamuk’s My Name is Red. And I really want to read them as well (and the multitude of other books on my shelves, the number of which I am too scared to tabulate).

Now the thing is, I also have far too many DVDs as well. My wife and I have scores of TV series on DVD that we want to watch, except the problems of young children who don’t want to sleep, work to be done in the evening (my wife is a teacher, so that means she spends almost every night marking – lest you think that teachers all stop work when the school bell goes) and the good TV actually on right now means our stocks seem to get bigger… and yet we keep buying them! And why not? We never go out to the movies (baby sitting is horrendous to organise) We don’t eat out – restaurants with a three year old and a six year old who hate most food except little franks and noodles? No thank you. So how else are we to display our marginal propensity to consume?

And yet DVDs are easy – a movie can be done in a couple hours without any sweat; but books are a bit of a weightier problem (literally). Of the 28 unread 19th Century novels, all of them are stereotypical 19th Century novels. Which means the authors have decided that it can’t really be a novel unless they reach at least page 650. So I know that I would be lucky to read one a month. And even if I did keep that pace up (which I won’t because I have all those DVD to watch as well, so by the time I get to bed it will be too  late to read much more than 20-30 pages) you don’t have to be good at maths to know that 28 books at the rate of one a month will keep me busy for quite while. And remember that’s not counting Middlesex and Co. 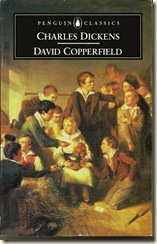 And the worst of it is I am currently re-reading David Copperfield – a novel I have read I think 3 times previous! Why am I reading it now? Well because a few weeks ago in my favourite second hand book store I came across a near new copy of it that was a different edition to the Penguin Classic version I had owned since 1993. It was in the larger format than the old Penguins, and my wife and I had recently bought and watched the DVD of the BBC mini-series adaptation of the novel (featuring a very young Daniel Radcliffe) and well, it made me wish to read it again.

And I have to say it has been a joyous experience. I last read it, I think, about 10 years ago and while some chapters are quite familiar, others I had forgotten, and now rediscover like an old friend on Facebook who you actually do want to send a friend request to. Once again I found myself hating David’s silly (oh so silly) wife Dora, and yet once again find a tear coming to my eye when I read of her death. Once again I shake my head in scornful disgust at the snobbishness of Steerforth, and once again I find myself blinking away tears when he drowns. 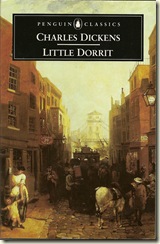 But while the past 730 pages have been a joy (70 odd to go – should finish it tonight!), part of me feels a level of guilt that I have spent time reading it and not the near new copy of Little Dorrit which I bought from my favourite second hand book store. I thought this even more today at work when I read that the BBC mini-series adaptation of the novel won an Emmy for Best mini-series, so I know I shall in the future buy that as well, and I would like to have read the book first – lest I have to do as I did with Bleak House and put off reading the novel until sufficient time had past that allowed me to forget the BBC adaptation. In that case it meant keeping the unread copy of the novel on my shelf for a further three years (and it had already been there for seven!)

And here’s the other problem – also on my shelves are books I have already read but wish to do so again. Yes I may have read Catch 22 about 7 or 8 times, but what harm could there be on another go? And War and Peace deserves to be read at least twice. I last read Les Miserables in 1992, Crime and Punishment in 1994 (the same year I last read Solzhenitsyn’s  The First Circle), Snow Falling on Cedars in 1996, Ulysses in 1999 (though I read it twice that year), and I can’t even remember when I last read The Grapes of Wrath. All of them I want to re-read; but all of them now I feel need to take a place at the back of the queue behind the 28 (and Middlesex and Co).

But at least there is one thing I can set right! One thing which will bring me peace and some hope that I may one day read all that sits on my shelves. I can vow to not buy another book until the 28 are no more. I can give those books already bought their due attention and not dilute their ranks with further purchases. Yes! That is the way! That is the manner in which I shall find the light at the end of the tunnel! I can do this, yes I can! Straight after this weekend when I will be going to the 6 monthly Lifeline Book-fair…

Think of it as part of your retirement plan.