Movie Review – The Boys Are Back 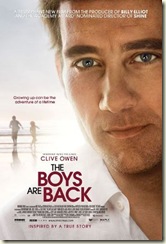 Scott Hicks’s latest film, The Boys are Back, opens with sports journalist Joe Warr (Clive Owen) driving a 4WD along a beach. He is laughing all the while as  the people on the beach all look at him in anger, yelling abuse. The camera pans around and we see why they are reacting so – sitting on the hood of the 4WD, holding on only to the windscreen wipers is Joe’s 6 year old son Artie (Nicholas McAnulty). It is a scene that almost encapsulates the entire film, it is one of joy between father and son, and yet one which you also can’t help but feel incredibly uncomfortable, if not freaking out about the safety of the boy.

The film then flashes back to Joe with his wife Katy (Laura Fraser), in what looks to be pure heaven on earth – a wonderful house, good job, great kid, happiness in abundance. Then Katy gets cancer, dies and leaves Joe, a bloke who had left the child rearing to Katy while he jetted about following sports events around the world, absolutely at a loss of how to cope with not only his wife’s death, but also his new found need for responsibility, which is further added to when his teenage son Harry (George MacKay) from a previous relationship announces he wants to move from England and come and live with his dad.

The film is based on the memoirs of British political sketch writer Simon Carr (who was actually living in New Zealand), and it recounts the strategy he embarked on to deal with this change. Essentially it boiled down to a parenting strategy of “Just Say Yes”.

And this is what we see happen in the film, Joe virtually abandons any sense of rules or discipline (or housework) and seemingly takes a Lord of the Flies style attitude to parenting. It freaks out the women in his life, and I must say it freaked out me – especially at points where it involved Artie and Harry finding themselves in serious trouble and danger. 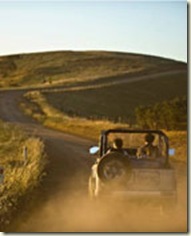 There is much to like about this film. Scott Hicks and his cinematographer Grieg Fraser (who also did the shooting on the soon to be released Jane Campion film, Bright Star) make South Australia’s McLaren Vale seem absolutely ravishing with the film having the look of a Tom Robert’s painting –  the unmistakeable light and colour of rural South Australia, that just can’t be replicated elsewhere.

The acting by the three males is excellent. It is good to see Owen acting again after far too many films where he seems to play Clive Owen (which can still be good, if it is in something like Inside Man, but which is God awful if in something like Duplicity). My only concern is he comes across as a bit too clean to be such a slob. Sandra Hall in the SMH has suggested Colin Firth would have been better casting, and I am inclined to agree – Joe is a character more akin to the role Firth played in Fever Pitch – a slovenly, football-mad school teacher. 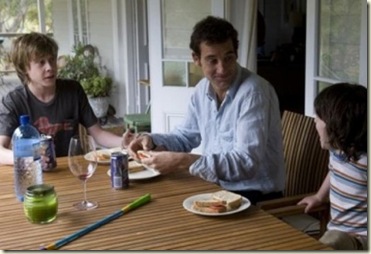 The young actors playing Artie and Harry are note perfect. McAnutly, in his first ever role, is nicely unHollywood – he’s not a wise cracking know-it-all kid, he is actually quite naive, and very sweet. George MacKay will suffer from everyone thinking he is the guy who played Ron Weasley in the Harry Potter films, but he gives a very strong performance as a kid who actually needs the discipline that Joe is unable to give.

My big worry with the film is whether it will find an audience. Since seeing it I have often been wondering whether I would like to see it again. It is a film that is not easily pigeon holed, and throughout I really had no idea where it was heading. It could have been a comedy but it doesn’t play for laughs; it could have been a tearjerker, but (the first 20 minutes aside) it doesn’t play too heavily on the mawkishness (though it does use the lazy device of having Katy be visible at times to Joe so he can interact with her and talk about how he  and Artie are doing), it could have been a romantic comedy, but it doesn’t go down that path. Instead it is sort of all of these things, but not.

As a result, I’m not sure what its market is. Mirimax in the US seem to have taken the same view, because despite very good reviewers from Variety, Screen Daily and the Hollywood Reporter, they didn't seem to put a lot of weight behind it, and it has pretty well died at the box office there. And I can understand why – it’s set in Australia, doesn’t star any Americans and it doesn’t end with Joe performing a strip tease to a bunch of working class women in a pub while “Y0uCan Leave Your Hat On” plays. 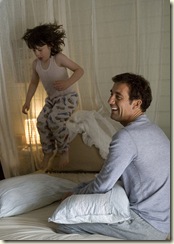 Instead what we have is a very honest portrayal of a man placed in a crap situation. Honest to the point of uncomfortableness. I could never advocate parenting the Joe Warr way, and yet the honesty of the man’s love for his sons, and his struggle to cope are brilliant to watch. I also have to say the death of Katy is quite possibly the most heart breaking death I have seen in film – and Hicks and screen writer Allan Cubitt are to be commended for getting the audience to care about her and Joe in such a short space of time, but mostly I commend them for the way they write Artie’s reaction to his mother’s death. It was so unlike anything I had seen on film, and was so achingly true – it was a film treating a six year old as someone who is actually six and not ten.