The monthly labour force stats came out today. Here’s the key stats from the ABS:

So in effect total employment went down 0.3%, but so too did the participation rate and thus the unemployment rate stayed the same at 5.2%. 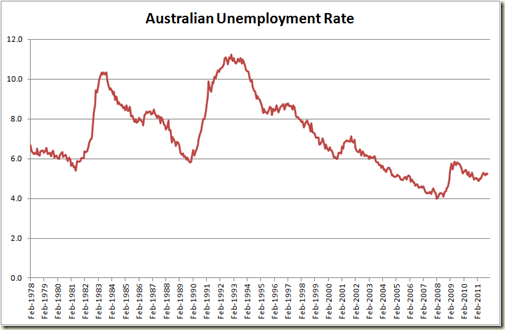 I always like looking at that graph just to remind myself how damn lucky we are at the moment… and also to remind myself of what is was like in 1993 when I left uni and wanted to work for a living.

But let’s not get too happy about our current situation. Normally I would bother with looking at total employment on a graph because over a long term it doesn't say much useful, but a look at total employment since November 2007 does give a good view of how things are going: 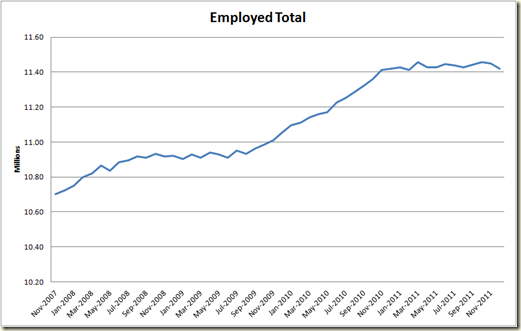 Now a look at the changes in employment over the same period also give a good understanding of exactly where we are at: 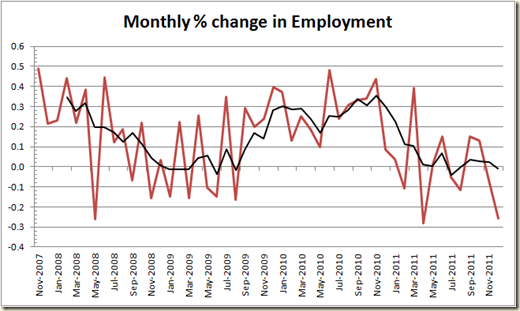 The black line is the moving quarterly average and you can see it has be on or around zero since April 2010,m which is about as long a time as it was going along at that level during the GFC.

Now Tony Abbott might suggest this is all the failure of the Government but his response that "This is a very disappointing result, and it demonstrates how important it is that the government urgently gets debt and deficit under control" is not exactly credible, giving this figure has nothing to do with debt and deficit, and is just lazy. There is no evidence that the current budget deficit is causing job losses, and to suggest moving to a surplus will boost jobs requires a pretty idealised view of what a budget surplus can do. Our debt remains low, but the political concerns of returning the budget to surplus must remain  given these figures suggest tax revenue is more likely to be flatter than it is to be growing by the amount needed to get the economy going.

As ever the Australian economy remains dependent on the rest of the world, and overseas conditions remain terrible. The UK just hit  8.4% – its highest for 16 years – the US unemployment rate is just fell to 8.5% 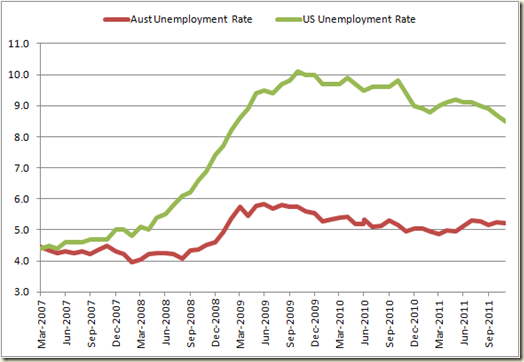 We do have China on our side, but China is not immune to what happens in American and Europe. The world is interconnected – someone has to buy the stuff made in China for them to need to keep buying the stuff we have in the ground they need to make it. And with the dollar remaining high (get used to it) industries here such as tourism will continue to struggle.

So the upshot is to expect the RBA to move on interest rates.

Yesterday the market was factoring a strong chance of a drop. I do not expect that to weaken after these figures.

So not great news for the economy. Not terrible – we’re holding on, and as Possum has noted the drop in participation rate is somewhat expected to happen due to the aging population, and thus it is unlikely we can sustain the growth in that rate we have had over the past decades: 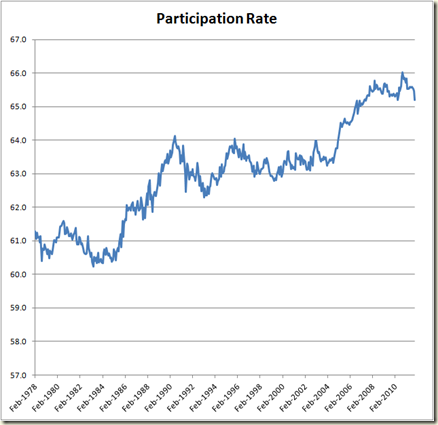 Enough of the dismal science. Here’s some nice news from America about a young kid with Down Syndrome who has been used in advert by Target – adverts which make no mention of him having DS. You can read a bit of the backstory here from blogger “Noah’s Dad”

Email ThisBlogThis!Share to TwitterShare to FacebookShare to Pinterest
Labels: Culture, Down Syndrome, Economy

You should see the historical unemployment rate back to 1940...

Mark - yep things are still very dire over there. And when unemployment is at 8.5-9% falls in participation rate can very much be due to people giving up. When it's at 5.2% I think that reason is less of an issue (though I'm not basing this on any data)

Just curious as to how the baby boomer retirements will impact the participation rate over the next few years.

Any ideas as to what we can expect?

Space K - that is something that is definitely going to lead to lower participation rate - one of the crucial issues of the ageing population.

We can expect a lot of problems and not just with having less people in the economy working, the problems of aged care are going to get real ugly within the next decade. I know this is one issue that Possum is very big on.

Many of the baby boomers are waiting for the economy to recover before retiring and claiming their super. Potentially the imminent fall in participation rate will be offset, to some extent, by rising employment/govt revenue etc.

I imagine you guys must be considerably younger than me.

How do I reach that conclusion?

During some 50 years the unemployment rate has been considerably worse than that...

Yes Markus - life and the economy was different then - high tariff walls for eg helped protect some pretty noncompetitive industries.

Come on. We haven't had import controls for a long while already. And still, unemployment is higher.

Were we not able to develop any competitive industries in the meantime, you know, to absorb the slack?

What people overlook is the effect of inflation targeting, the NAIRU mumbo jumbo, fiscal sore+ obsession, privatization and all these other wonders on unemployment.

They all involve a trade off: more unemployment in exchange for something some egghead working at the RBA or the Treasury, with secure employment, considers more valuable.

That's why, 50 years down the road, the unemployed are still worse off.

And, by the looks of it, they better get used to it.

I think the main difference between the full employment days following WW II and now is the lack of political will from the Govt to actually achieve a 2% unemployment rate.

Also, Grog, a couple of subtle spam-bots seem to have made it through the filter up there.

"We haven't had import controls for a long while already"

Yes we had full employment in the 1960s, we also had a closed, backward looking economy that didn't bother getting colour TV till 1975 (a decade at least after America and 7 years after the UK), and which produced cars years behind the rest of the world in technology and safety.

Are you really serious?

I mean no offense, but I can only assume you are kidding me.

"Yes we had full employment in the 1960s, we also had a closed, backward looking economy that didn't bother getting colour TV till 1975 (a decade at least after America and 7 years after the UK)..."

We have colour TV! We've moved to paradise, then.

"... and which produced cars years behind the rest of the world in technology and safety"

And you forgot to mention: now we have several Miss Universe, too. That's what I call progress.