Drum piece–The Olympics, the Spectre of Doping, the greatness of Rudisha

My Drum piece this week was on the Olympics. Now any long-time readers of this blog would know I am a bit of an Olympics nut. I now own the 2004, 2008 and 2012 editions of David Wallechinsky’s “The Complete Book of the Olympics”. During the Beijing Olympics, in the day prior to Twitter (or at least the day s prior to anyone I know being on it) I wrote a running diary of the Olympics.

And when it comes to the Olympics all I really, truly care about is the athletics. I’ll will definitely watch every single other thing (and pretend to be an expert on it all – “geez she really stuffed up the landing after that Double Kafelnikov jump… 9.95” – but I am a track and field snob. But what I dislike most about track and field is that most women’s World Records are beyond reach because they were set during an era when cheating through steroid use was rampant and pretty much unchecked. At that time there was only testing done in-competition, and thus to get caught you really had to be stupid. It gave a boon to women who suddenly had testosterone flowing through them like they were men – to whit: I really hope Sally Pearson wins Gold. Back four years ago when she won silver here’s what I wrote (back when she was Sally McLellan):

The great thing about athletics (and sport in general) is that nothing is written in stone. The winner, Dawn Harper, had the 3rd slowest PB of the field, and the Lopes-Schliep had the 2nd slowest, and McLellan the 4th slowest. Form, history, experience all mean bugger all when you need to lay it down over 100m in an Olympic final.

To do what McLellan did you need to have ice in your veins. In her interview afterwards she was in shock, but displayed the reasons for her run - total commitment of mind and body:

"I walked out into that stadium and I've never, ever been so pumped in my life," she said.
"I was acting really strangely for myself.
"I was yelling out, I was saying `come on' really loud and I was just talking to myself out loud in front of everyone sand I never do that.
"I was really ready to go ... I just said 'no guts, no glory', and I got it."

London is long way away, and a lot can go wrong between now and then (just ask Liu Xang); but from the way she spoke last night, you know she's already focusing on it –and then silver won't be enough.

The way she won the World Championships last year was breathtaking. It was to see an athlete peak at exactly the right moment. If she does lose it will take a massive run by someone else, because I just do not see her choking. And I hope her post race interview is as great as last time:

But then I want her to break the world record.

With the men, the doping issue was as big, but not as long lived in the record books – because the advantage provided was not as severe (except in strength events like shot put etc): 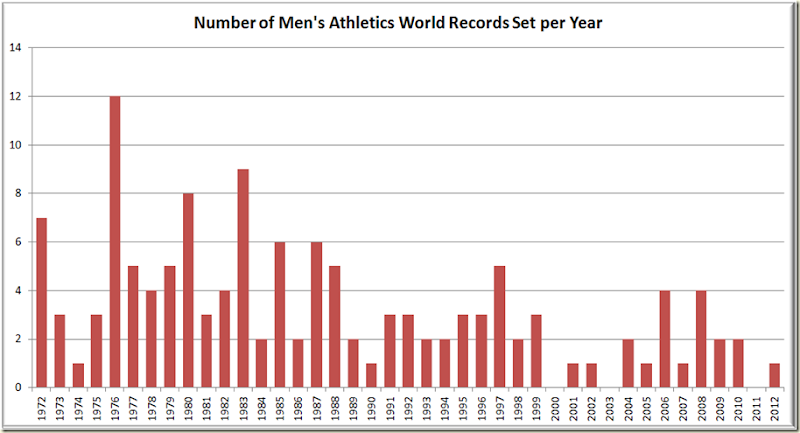 Incidentally the oldest world records in men’s athletics are those in the events most beneficial for drug cheats – Discus (1986), Hammer Throw (1986) and Shot Put (1990).

It is rather surprising to note that since 1990 the 100m world record has been broke nor equalled 14 times – more than any other event.

Which brings us to Bolt. Now I will say this – I don’t think he is on the gear. But more than that, I hope he is not, because I think if he is ever found guilty of doping it will almost kill the sport. The data does suggest he is a step ahead of history: 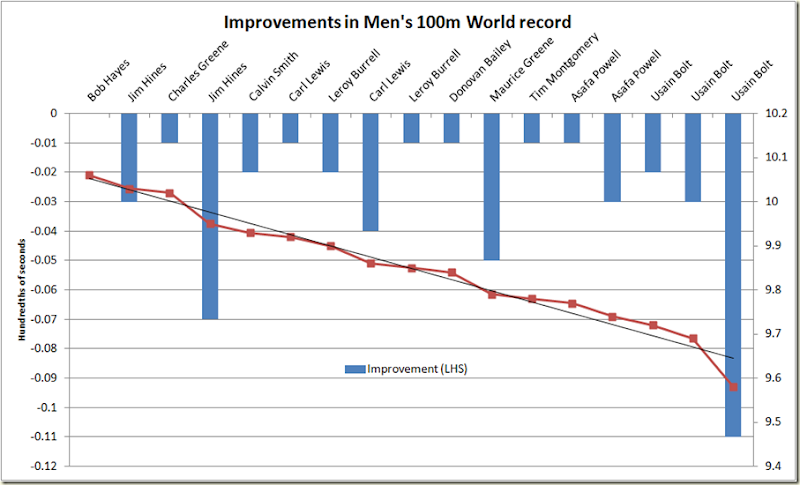 And then there is the Women’s 100m WR improvements: 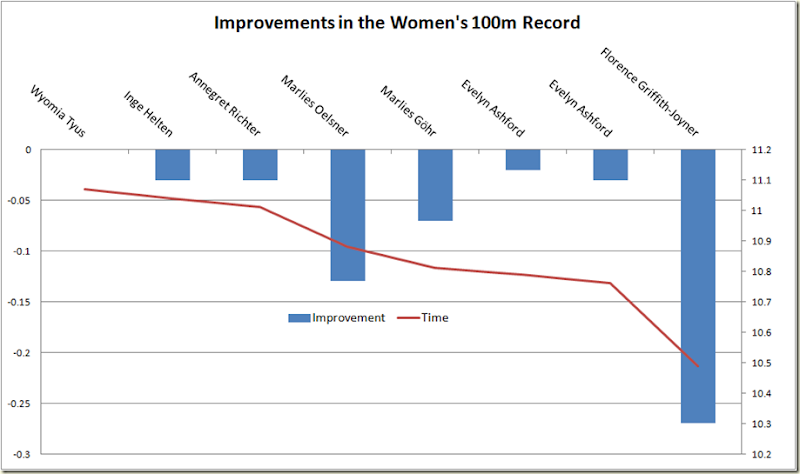 Yes, “Flo-Jo” improved it by over a quarter of a second.

While issues of her doping are pretty high on the gossip-scale (including by athletes at the time), the big question mark about that record is that most observers are pretty sure it was run with a massive tailwind. Officially the tail wind was zero, and yet at the same moment the race was run, the triple-jump completion that was happening just 10 metres away was registering winds of up to 4.3 m/s – more than double the 2 m/s allowable for a WR. So perhaps her second best time of 10.61 (with a 1.2m/s tailwind) is the more “legitimate” WR. But even that would be an improvement of .15 secs (and .

Scarily, when you look at Bolt, the 200m is probably his best event – he holds every age world record from 15 year olds up. The race has now been run 213 times faster than 20 seconds by 47 different men. A chart of the number of times the 200m has been run under 20 seconds reveals again a stark measure of Bolt’s difference to the filed: 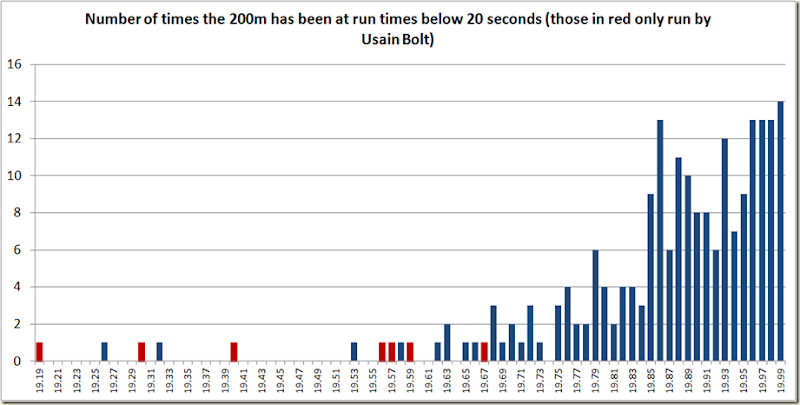 The 2 guys at the far left of the chart  - Bolt and Yohan Blake – both train together in Jamaica.

Here’s the same chart for the 100m (hard to believe that the 10sec mark for the 100m has now been broken 575 times, and only once has it been done by an Australian – Patrick Johnson in Japan when he ran 9.93 with the almost perfect 1.8 m/s tailwind – incidentally his second best time over the distance was 10.10 secs): 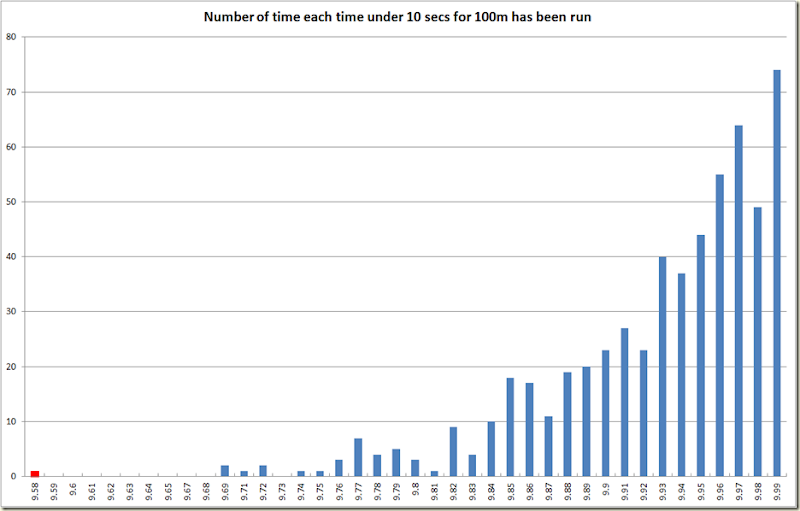 There has long been whispers about poor out of competition testing in that country, but it has improved since 2009. And the reality is many Caribbean born sprinters have in the past prospered – it’s just that they prospered for other countries ala  Donavan Bailey of Canada. Indeed, in the 1996, the entire gold medal winning Canadian 4x100m relay team were born in the Caribbean – 2 of them from Jamaica. So it is not that much of a shock that Jamaican sprinters are doing well.

The cruelness of the Olympics coming around only once every 4 years is highlighted in the men’s 800m race. Since 1972, no holder of the 800m world record has won an Olympic Gold Medal – this is mostly because since the 1980 Moscow Olympics the record has been held at each Olympics by either Sebastian Coe or Wilson Kipketer. Coe ran a shocker at Moscow and finished second, and four years later was beaten by another all-time great, Joachim Cruz. His best years were also 1979 and 1981 when he broke the world record. His time set in 1981 was over a second and half faster than anyone else had ever run.

Kipketer, a Kenyan who had moved to Denmark in 1990, was at Atlanta in 1996, despite being the reigning World Champion was denied the chance to compete because he was not a full Danish citizen. In 1997 he first equalled Coe’s world record and then broke it 2 more times. In 2000 at Sydney, coming off a torn calf muscle injury he ran a poor tactical race and like Coe in 1980, came second. (I was actually in the stadium. I nearly cried as Kipketer was my favourite athlete – he ran like liquid.) In Athens in 2004, age beat him and he did well to finish 3rd.

But at London, a new record holder will be in attendance. Kenya's David Rudisha broke Kipketer’s 13 year old record in 2010 (and then broke his own record 7 days later. This year he has run the four fastest times, and his best time this year is a second and a half better than anyone else. Watch his run in Paris in July and see a man operating on a different level to the rest of the field.

He is the surest of sure things at London, but if the Olympics have shown anything – think Hicham El Guerrouj in Sydney – it is that sure things are not guaranteed wins.

But for watching drama, excellence all wrapped up in less than 2 minutes, get up for the 800m final on Friday 10 August at 5am. I just can’t see him being beaten.

Great post. Are you going to be running a daily update for London 2012?

Michael Phelps didn't think he could be beaten and was blown away by one of the best swims I have seen in years.