The headline figure is GDP growth marginally below expectations of 0.6% in seasonally adjusted terms. 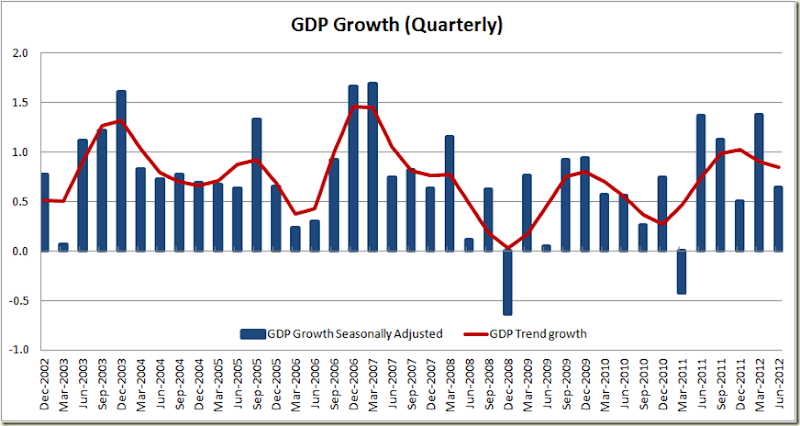 The biggish news is that the March GDP growth figure of 1.3% which many assumed was wrong and would be revised down, was wrong. It was revised, but revised up to 1.4%.

This is why although the quarterly GDP growth was slightly below expectation the annual growth was pretty much on the mark at 3.7%.

Below we have the annual growth, and just to give you some perspective, let’s go back to 1990 just to show how long Australia has gone without negative annual growth. 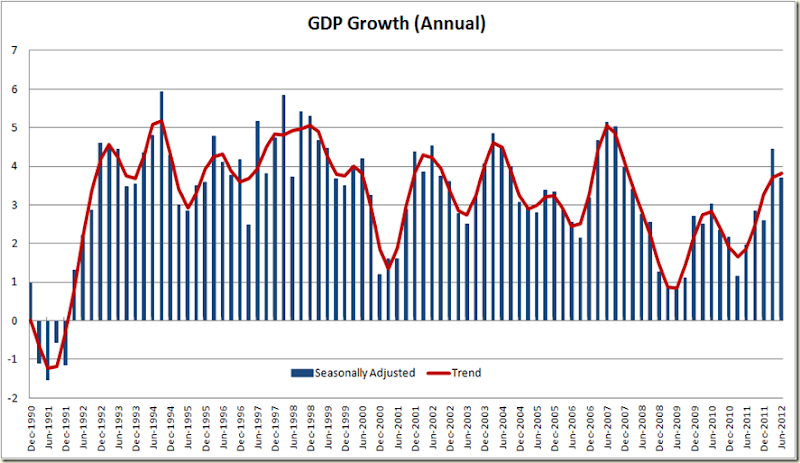 We live in unusual times.

And I know GDP does not mean everything, but go over to the UK or USA and ask if negative annual growth is noticed. A growing economy can hide many problems but a shrinking one sure as heck brings them to the surface, and it ain’t fun.

But while that nice annual growth figure of 3.7% suggests life is good, as Stephen Koukoulas notes, for the September figures in 3 months time to show annual growth of above 3.0%, the September quarter will need to grow by around 0.5%, which is probably a borderline call at the moment.

Ok, to the states.

Big shock, WA and QLD are doing well.  Victoria and SA fell below the 2% mark, but NSW had a nice 1.5% growth in the past quarter to lead to a 3.4% annual growth.

The National Accounts also show how the terms of trade are going – and we see that the prices we’re getting for our exports are going down at a fair rate of knots: 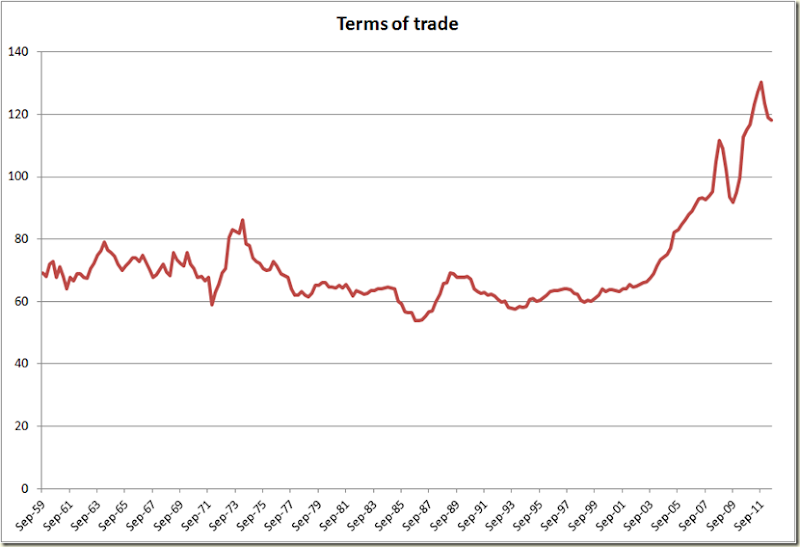 The prices have collapsed somewhat, but they are still above pre-GFC levels, and anyone who was investing thinking that the boom in prices after September 2009 were going to continue that way are a tad foolish.

Time for some good news: Productivity.

The year on year annual growth in GDP per Hour worked came in at 2.9% seasonally adjusted and 3.4% in trend terms. To give some context, the average growth rate  between December 1997 and December 2007 was 1.8% 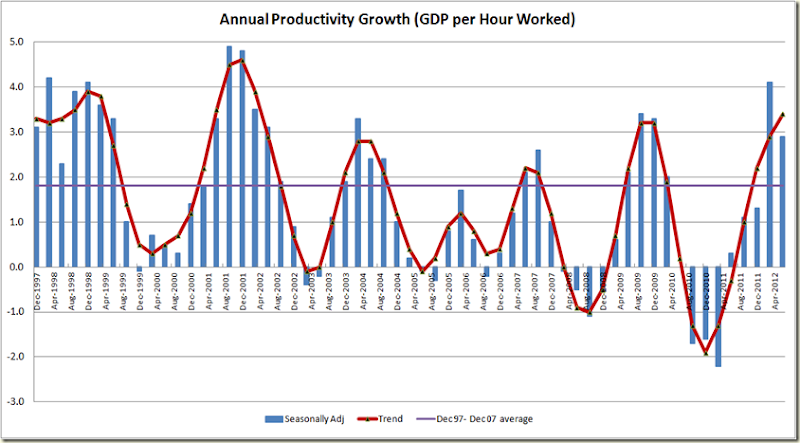 And when you factor in that the huge decline in 2010 occurred due to the massive floods and cyclones in QLD – in which GDP fell but hours worked didn’t because mining companies etc didn’t lay off staff because they knew the floods were only temporary – you have to say that things aren’t doing too bad. As Matt Cowgill noted however, that won’t stop the “narrative” such as was reported in The Australian today 2 hours after these figures were released where Dick Warburton said:

"We need right away to look at these productivity measures," Mr Warburton said.

"We need to look at what we can do to bring it back to those levels that make businesses profitable.

The other narrative is the rampant labour costs and wages breakout. On this at least the National Accounts show there has been a rise in Labour Costs. The costs are now back to where they were prior to the GFC. 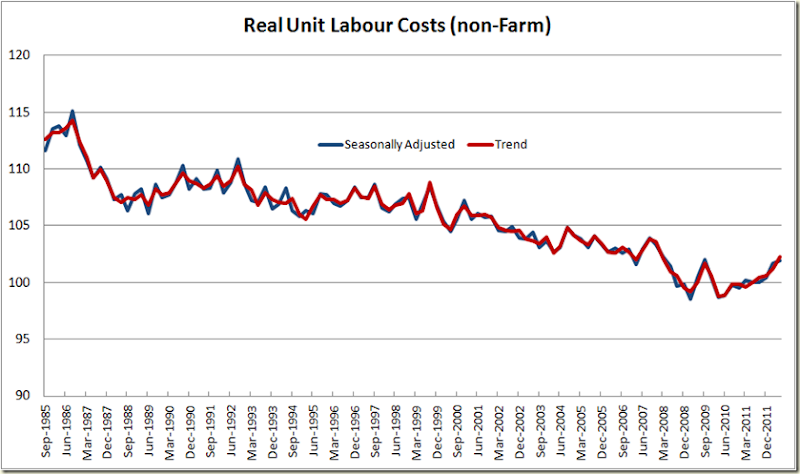 The annual increase includes the big jump of 1.2% in the March quarter. The June quarter was a much more normal 0.2%. 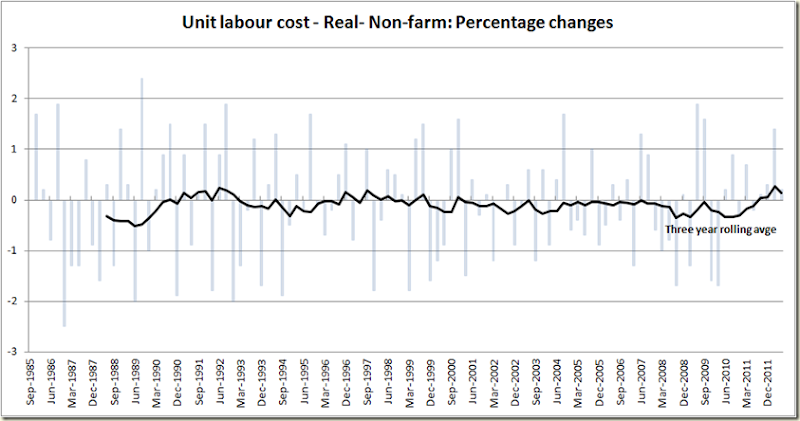 Not coincidentally the share of Total Factor Income going to employees is back to pre GFC levels: 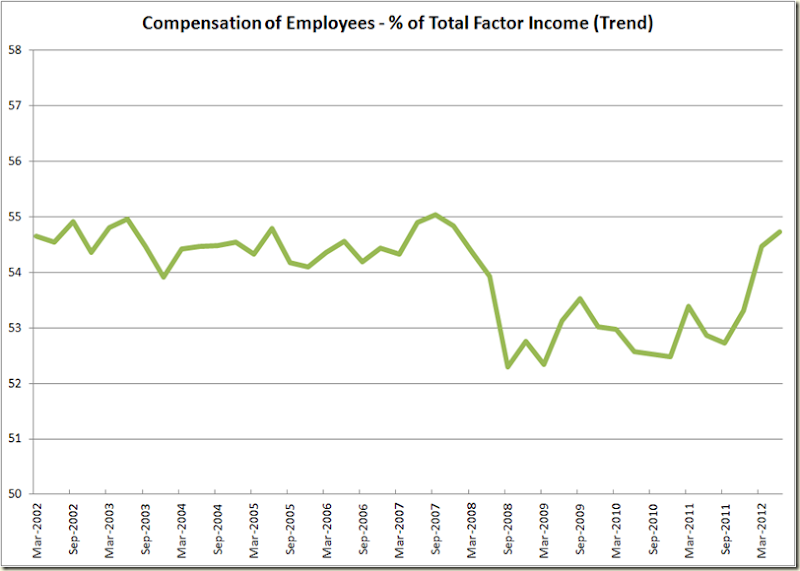 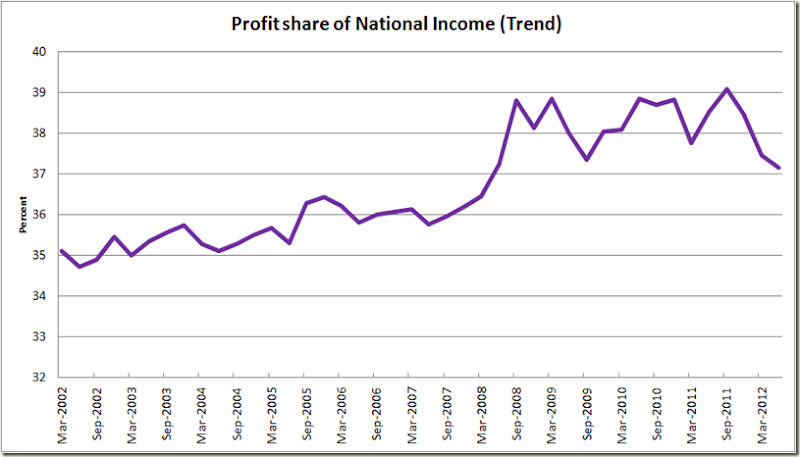 And while the was a 0.6% increase in household consumption, there was also a small increase in the household savings ratio from 8.9% to 9.2%: 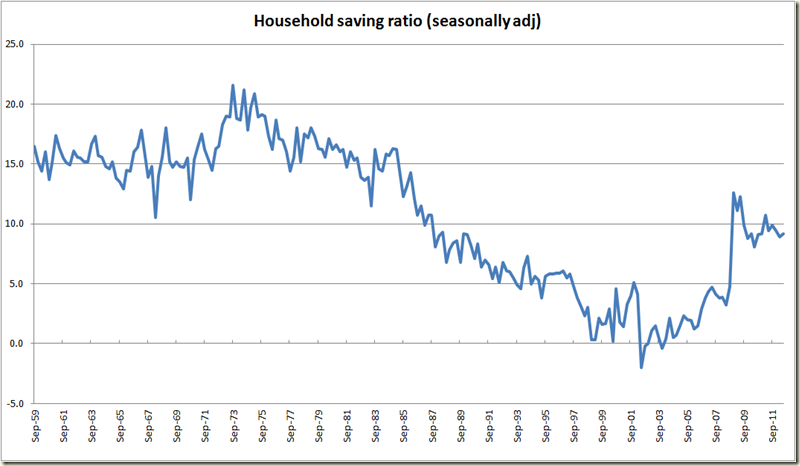 Tomorrow we get the Labour Force figures, so the joy of economics data never ends.

I heard this was a good place to come for some quality writing and thoughtful comment. What I find is more graphs than an Alen Kohler PowerPoint.

Dude, do you write?