And now to round out the week’s economic data, Industrial Disputes. No doubt these’ll get a big run tomorrow in certain newspapers (a hell of a lot more than they gave the productivity figures, I’m guessing). 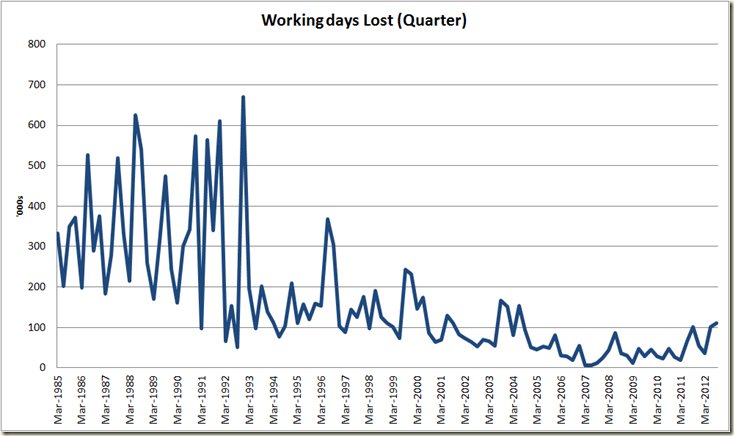 Now I know that’s not fair because it shows context, so let’s just focus on the past 10 years: 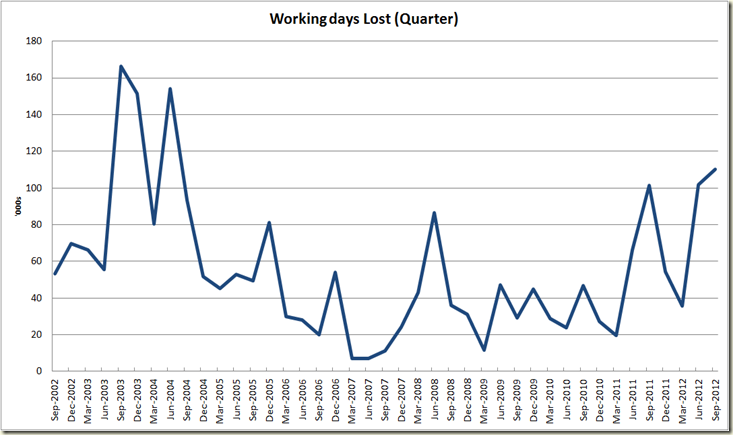 So yep, the September quarter saw an increase in the number of days lost to strikes.

And if we look at the data, we see yep: 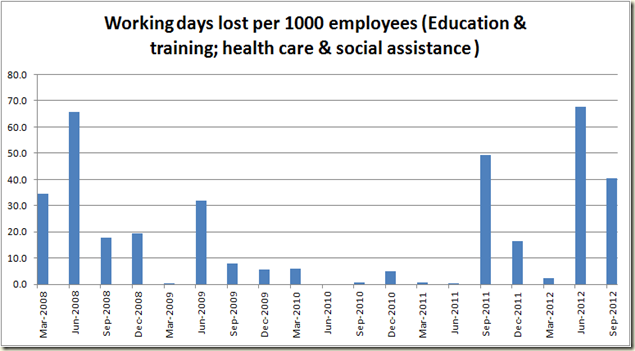 Mostly these is non-FWA related. There were also however a big jump in disputes in the construction sector. It is worth remembering the September quarter includes the Grocon strike by the CFMEU: 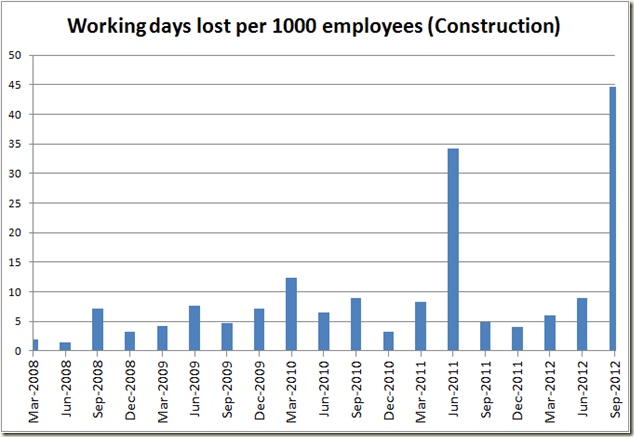 In other sectors things aren’t so strike happy, eg in coal mining there was a big drop: 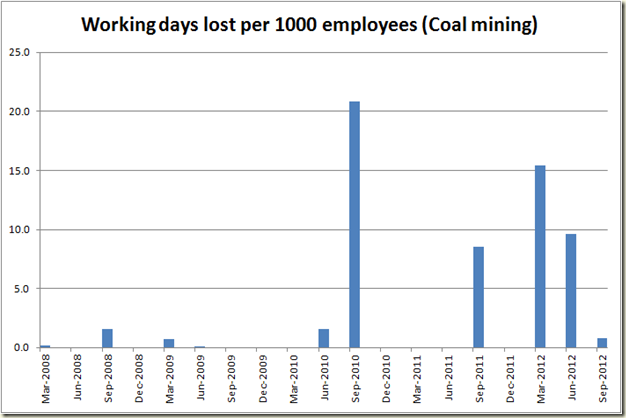 and in the manufacturing sector after 3 quarters of next to nothing there was a little spike: 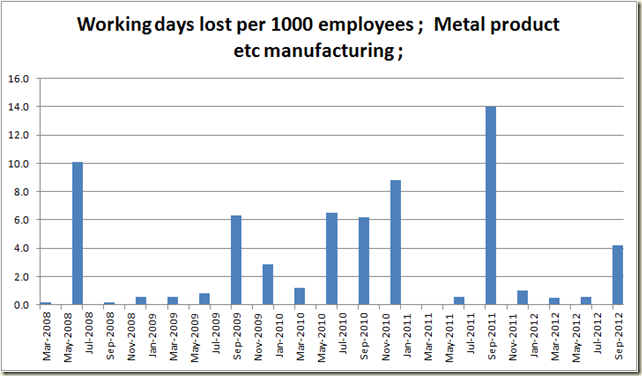 It’s worth noting the scalr of each of these is different, so here they are on the same chart: 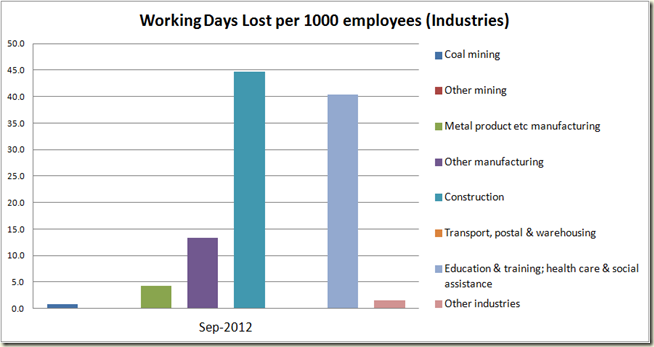 It all washes out for an annual figure of this: 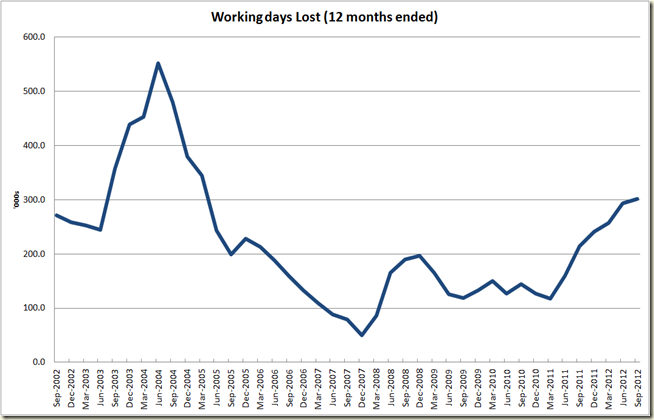 It;s worth noting that it’s not as if Australia is breaking out in strikes at every workplace. The actual number of strikes is pretty flat: 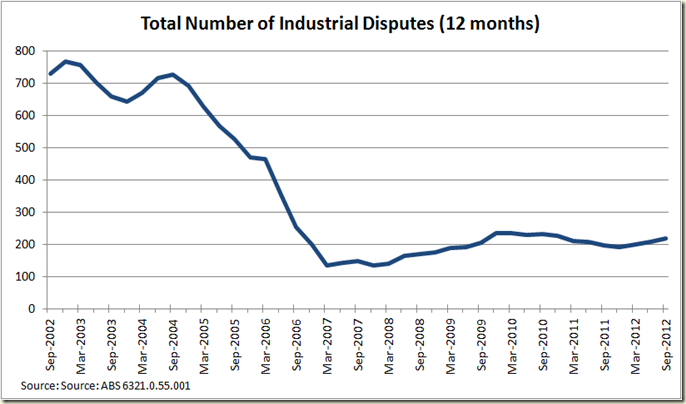 But the number of employees has risen – indicative that the strikes are involving more workers per-strike than in 2010-2011: 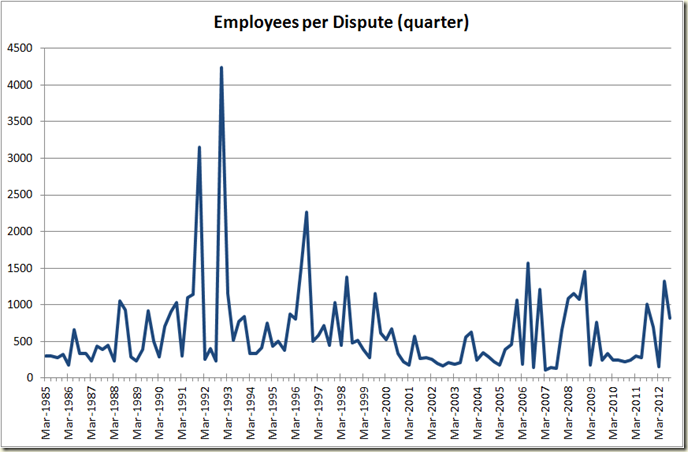 And that pretty much is that. No doubt it means the unions are rampant and there is a n industrial war being waged, because of course it is only the fault of workers that industrial disputes occur.

Anyhoo just remember if the problem with industrial disputes is all about productivity then here we go:

Do you see that trend line? This is the first time for 10 years we have had 7 quarters in a row of productivity growth in trend terms. But we all know that the problem with productivity is long term, so let’s look at the 5 year rolling average: 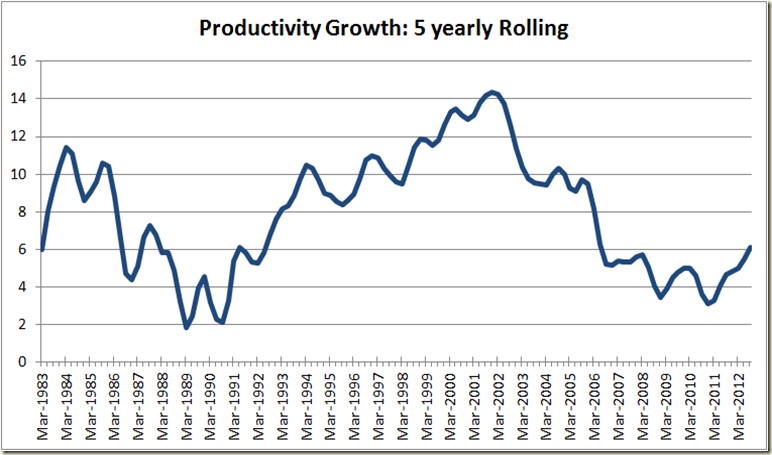 Look I know it’s not record breaking. I know it’s not as good as what occurred back in the 1990s when computers were being introduced into every work place, but it is now been going up, and has been for a year and a half.

Now I don’t mean to be bitter, but if such a turn around had occurred under Howard and Costello’s watch, The Oz and AFR would be demanding they be granted sainthood.

Of course this 5 year growth will likely go up in the next 18 months because the over that time the impact of the GFC will wash out of this rolling 5 year period – and because it’s not likely that we will have 5 quarters in a row of negative productivity growth, that mean the 5 year average growth will increase.

Of course if Abbott is PM by then, I’m sure certain newspapers will find a way to mention it on the front pages…