My Drum post today looked briefly at the two speeches given last week by Julia Gillard and Tony Abbott. I have a bit of a slap at Abbott for essentially keeping to the line he has been keeping to for 2 years that life will be great and wonderful under a Liberal Government because in 2004 the budget was in surplus.

Also removing the carbon price will make the world a joyous place with tangerine trees and marmalade skies and other wonders to behold.

I have no problems with the Liberal Party slapping the PM and Swan about the head for having said squillions of times that they would deliver a surplus. The ALP shouldn’t have ever been playing the surplus is great game. They should have changed that story 4 years ago. They had the perfect opportunity but they didn’t due I think to massive insecurity on the part of Rudd and Swan and as a result they’ve kept to that mantra ever since. Stupid oh so stupid.

But if we’re going to talk about surplus and deficit, please let us talk in a language that makes sense. The Liberal Party is talking about how much more taxation is being raised now than in 2007. Well duh. The economy has grown since then, inflation has occurred sine then. Of course more taxation is collected now than then.

So this government for the first time had to deal with 2 successive years where gross revenue declined.

If we put it in percentage terms you can see it pretty starkly: 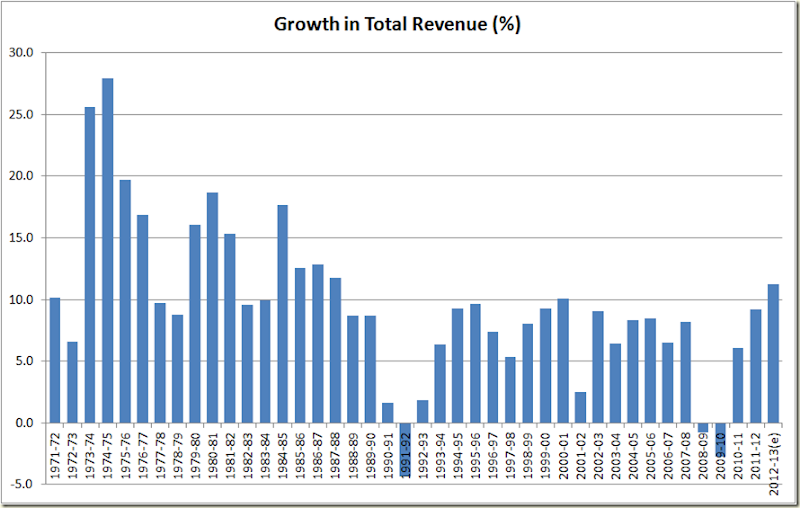 The problem – and it was always a likely one (and thus, yes the Govt does deserve criticism for it) is that the expected growth of revenue in 2012-13 was rather ambitious.

If we look at the spend in % of GDP terms – which is the ONLY intelligent way to judge the level of revenue and expenditure compared to previous years it again comes out just how different the revenue picture is now compared to 2004-05 – which Tony Abbott in his speech referred to as a good comparison: 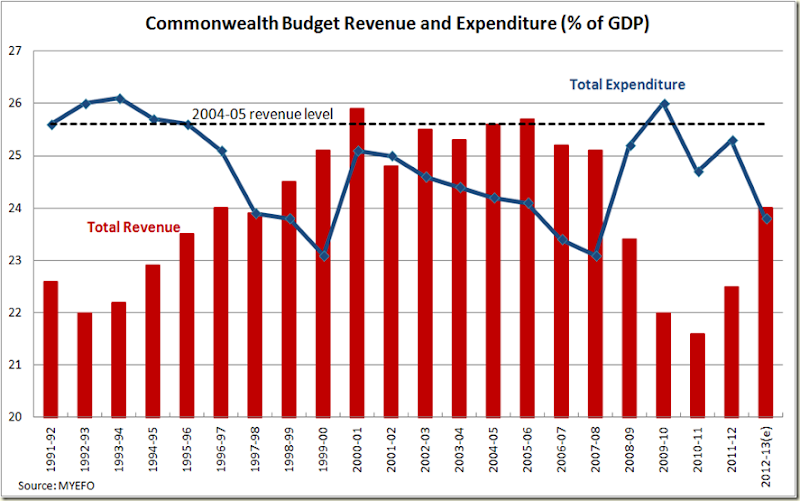 It’s worth remembering that when Peter Costello allowed (and quite correctly so) the budget to go into deficit in 2001-02 both revenue and expenditure were higher than what Swan is trying to do in 2012-13.

I think it is a pretty strong indictment of Swan that I would wager 95% of voters think it is the other way round. 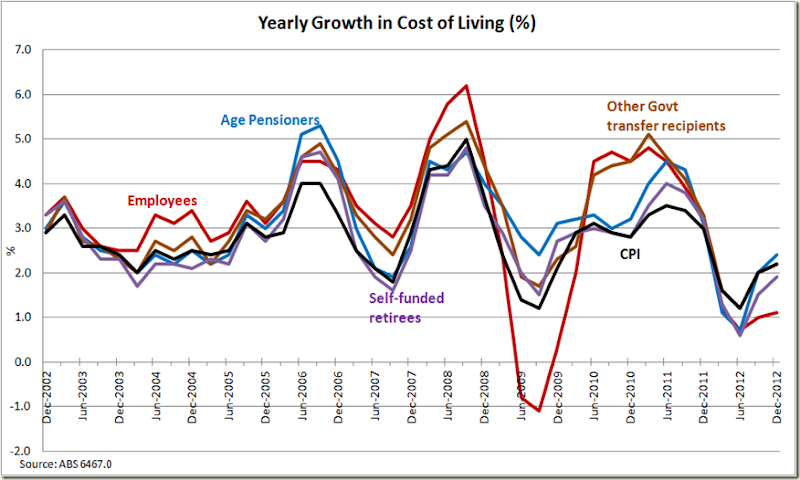 Age pensioners who as a rule don’t pay a mortgage don’t get that benefit of lower interest rate.

To cut through the mess of the above graph here’s the pensioners compared to CPI.

As you can see currently they are pretty close to the CPI – especially compared to 2005-06 and 2009-11, so it’s a bit tough to make a case that the CPI is currently giving a distorted picture. But what this graph does demonstrate, is that that is not a situation you can assume always occurs. 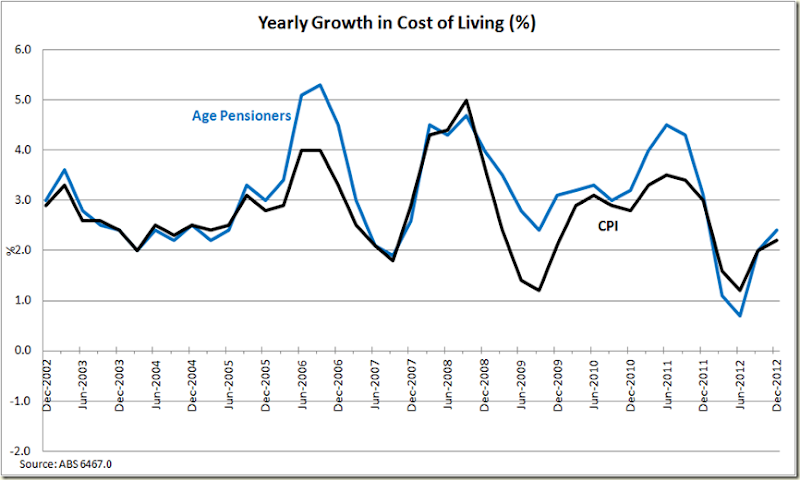 The comments on your Drum piece (or at least the few I read before losing the will to live) were predictably stupid and ill-informed. The fanboyz of all persuasions were out in full force.

For the sake of my health, I gave up a long while back reading the Drum, let alone the comments.

Yeah the comments on The Drum are tough reading.

If you ever need confirmation of the incredible left leaning bias of "your" ABC, visit the comments section of any of the opinions posted at The Drum. It's an almost exclusive left-a-thon. Left leaning contributors like Jericho vomiting out leftist drivel to an almost exclusively leftist audience. Yet the electorate is clearly made up of almost equal numbers of left and right leaning individuals. Surely this dictates that equal voices should be heard from both sides of the divide. The ABC doesn't need yet more leftist opinion and boring graphs from the likes of Jericho it needs less. The ABC suffers from staff capture and the senior management suffer from Stockholm syndrome. Come on, isn't there a single centrist voice the ABC could hire to counter the hundreds of Greg Jerichos it has on it's books?

Anonymous, I just checked on The Drum Opinion page and the three "Hot Topics" were by Chris Berg, Peter Reith and Mike Stuchbery. "An almost exclusive left-a-thon"? You have got to be joking!
How about addressing what was in the post, rather than attacking the man?
What do you mean you can't argue with any of it? What about a critique of Greg's Drum Post? Unable to argue with that either?
Well neither can I . Spot on as usual, Greg!

Another lucid post. Funny how the facts rile some people up...