Today was about Kevin Rudd and the navy.

He gave a speech at the Lowly Institute in which he stated:

The Government will establish the Future Navy Taskforce that will provide advice to the Government on implementing these recommendations and other recommendations of the Australian Defence Force Posture Review and 2013 Defence White Paper that offer operational advantages, enhance capability sustainment requirements and relieve future pressure on the current location of Fleet Base East in Sydney.

The Taskforce will provide advice on the timing, proportions and implementation of moving some or all of Fleet Base East to Queensland and Perth and developing, upgrading or expanding Darwin and Broome.

The media release that followed said much the same thing:

Now this quickly came to be represented in various parts of the media as only about moving all of Fleet Base East north to Brisbane – ie going beyond what was recommended. The “some” bit got left out a tad.

Barry O’Farrell went on the full offensive, suggesting it would cost 4,000 jobs in Sydney.

But what Rudd has proposed is pretty much in line with that recommended in the recent Defence Force Posture Review Report:

(29) Defence should develop options to allow large amphibious ships to embark Army units based in Brisbane and (as a lesser priority) Adelaide, in addition to Townsville and Darwin.

So that sounds pretty straightforward. Rudd is just doing what was recommended. The problem however is that the Defence White Paper released in May noted:

5.38 The Government has decided not to proceed at this time with long-term planning for establishing a supplementary east coast fleet base in Brisbane (which had been recommended by the Review).

The significant preliminary cost estimate (in the order of $6 billion), challenges associated with land acquisition, environmental considerations, the need for extensive dredging and the wider dispersion to a third fleet base of Royal Australian Navy personnel and training, all suggest that establishing a fleet base in Brisbane would be challenging and require significant continued investment for it to remain sustainable.

5.39 Further detailed analysis and feasibility studies have confirmed that the fleet bases in Sydney and Perth will continue to meet the Royal Australian Navy’s needs for the foreseeable future. Should existing fleet base arrangements or operational requirements change in future, the Government may again consider the need to plan for an additional fleet base on the east coast.

So it’s a bit of a change of tack.

There’s nothing too wrong with that – sure it’s $6 billion, but we’re talking it being done by 2030, so it’s not like it is a budget killer.

It’s so far off into the future that those shipyard workers currently living in Sydney would be able to catch the Very Fast Train to Brisbane by the time it is all done.

The main problem with this policy is that yet again it shows that the ALP is not campaigning like a government. A government uses the White Paper and comes out with a number of great policy ideas that it can then announce during the election. And the policy then even if long-term has the ring of deep thought about it.

Instead once again we have Kevin Rudd announcing something that highlights how he was not PM 3 months ago. 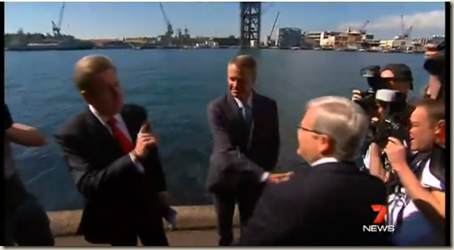 It’s great to have long-term vision. But it must have the impetus of solid development behind it. Not a confused sense of “didn’t you rule this out in May?”

The policy also led to dopey stories around the traps, such as the headline item in the Adelaide Channel 7 news which suggested “thousands” of lost jobs in Adelaide. This was all based on the belief that spending $6b for this would have to mean $6b being spent on defence elsewhere.

Complete bollocks, but it got a run, nonetheless.

Moreover given today's run in between Rudd and Barry O’Farrell, The Daily Tele tomorrow will no doubt run something idiotic on its front page.

Tony Abbott was spruiking his employment policy which was a re-tread of his similar policy in 2010. It involves

This relocation assistance will only be available to long-term unemployed jobseekers who have been on Newstart or Youth Allowance for more than 12 months. People relocating between capital cities or within capital cities will not be eligible for the payment.

I doubt they’ll have to worry too much about the cost. I expect little of it will be spent. Sure there is unemployment in regions, but the most numbers of unemployment is within capital cities, and this won’t help those people.

Funding for long-term unemployed is all well and good, but I don’t think the main reason people are unemployed is they lack the incentive to get a job.

Far better to spend money of training and assistance to get a job rather than assume they just need some financial encouragement to get of Newstart.

Rudd should let others do the head kicking. No one is going to start thinking this just because he says it. In fact it comes across as grasping at straws. A bit like Fraser in 1983 talking about the banks going bust if the ALP comes in.

You don’t want to over-reach. And if you think these things, let others say it for you – or even better use an advert to show why you think it, and get the voters to think about it without even knowing why they are thinking about it.

But in the end, Australia is not America. The ability of our leader to cope in foreign affairs issues won’t matter.

Today Tony Abbott announced a policy to provide retrospective payment for victims of terrorism of up to $75,000. The government brought in legislation to provide such support it was for future victims.

Abbott has pledged to “in the first 100 days” to introduce legislation to back date the payment back to Sept 11 2001.

Notionally trying to make the press conference seem non-political he still found time to suggest the ALP’s “behaviour towards the victims of terrorism was mean-spirited.”

During the press conference he was asked about the responsibility of those who travel to areas of danger, given in 2005 there were travel warnings about going to Bali:

QUESTION: There were travel warnings there at the time not to travel there?

TONY ABBOTT: And look, if you are walking down the street at 2am in Kings Cross in Sydney and you get king hit, maybe you shouldn't be there. Maybe it was an unwise place to be, an unwise thing to do. But if you do get king hit and you are badly damaged, you are helped by the New South Wales victims of crime legislation and I think that the Australian victims of overseas terrorism should get similar help.

It was a dumb analogy to use, and strays into the blame the victim area. It also in a sense suggests a similarity between an area with a warning about terrorism and Kings Cross at 2am.

Which I think even Abbott might realise is a bit of over-reach.

But I can understand the point he was trying to make – namely that even if there had been travel warnings that does not mean they should be denied payment. But he made it in a poor way

I don’t think he deserves to be slapped too hard for it. The SMH and Guardian Australia have articles on it in which the father of Thomas Kelly who died after being king hit in Kings Cross says that Abbott’s comments were “throwaway” and “offensive”.

He won’t get much blowback for it. Had Rudd said it, the Tele would be firing up the Photoshop of course. The same rules don’t apply for Abbott.

But it would be nice if just once it was noted in a tabloid that Abbott’s campaign has hardly been gaffe free.

Today the Museum of Australian Democracy announced it had acquired the photo of Julia Gillard taken by 12 year old Sophie Deane.

Sophie has Down Syndrome and took the photo at the media event for the signing of the NDIS agreement between the Commonwealth and Victoria. 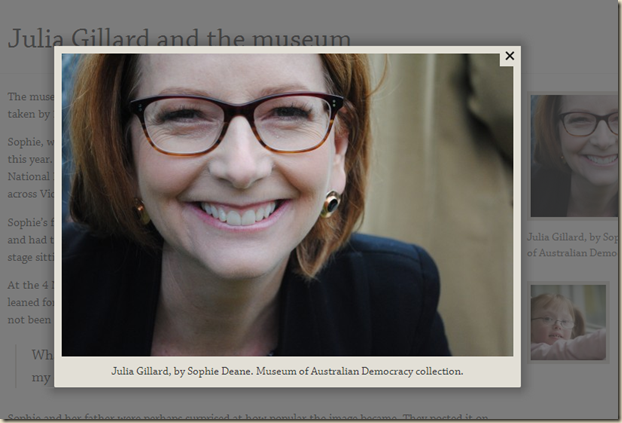 It was great shot, and an excellent move by the MoD.

When Garden Island was first established, sailors and people in the ship maintenance trade all lived within walking distance. People who work at Garden Island today would have to commute a fair distance (4000 jobs? Really? Where did that number come from?), and if the Navy relocated many would relocate with it. Sydney needs a military presence but Garden Island ain't it.

The government would sell it to one of their mates for a pittance and something hideous would be built on the site. That's Sydney!

Be a good spot for a casino, I'd have thought.