On the QT: Big grill, no sizzle

Today was the day that apparently the Secretary of the Treasury, Ken Henry, was going to "get grilled" by opposition Senators in the Senate Estimates Committee on Economics, due to the statement by the PM yesterday that Henry had advised the Government that the RBA agreed with the Government's 100% deposit guarantee. This contradicted a story in yesterday's The Australian, which suggested the RBA "strongly voiced concerns" about the guarantee.

Now Senate Estimates are all about the opposition going through, in as small a detail as possible, government spending and decision making - it involves primarily asking questions of bureaucrats - with Government Senators sitting beside them, but often they are not the ones being asked the direct questions. It can be rough for young players (and even some older ones), but Ken Henry, ain't one to get flustered. In fact most of this morning he looked positively bored by the experience.

The opposition does not like Ken Henry, and Malcolm Turnbull, I think it would be fair to say, has no time for him. This goes back to last year and the $10 billion take-over of the Murray-Darling River Basin. In April 2007 Henry in a speech to his Department said that the Treasury had been left out of the development of the proposal and that:

"All of us [ie Treasury] would wish that we had been listened to more attentively over the past several years in both of these areas. There's no doubt that policy outcomes would have been far superior had our views been more influential."

Peter Costello responded by saying "Treasury is no water expert. Treasury is good at Treasury", which was an extraordinary thing for a Minister to say about his own Department. Malcolm Turnbull who was Environment Minister at the time also chimed in, saying:

"Treasury don't know anything about water … This is really a political issue. All that's required is political leadership.... You've got to make judgements, but they are not judgements, frankly, that a, you know, that someone who is only a sort of financial person can make … It involves dealing with practical people, people who've got a lot of dirt under their fingernails, who work all day in the bush and know how things work."

As Alan Ramsey said of Turnbull at the time: "What an arrogant twit he can be".

Now what was the upshot of all of that? The Howard Government cut Henry's bonus pay. So much for wanting frank and fearless advice...

Early this year there there was a sequel: Turnbull, then Shadow Treasury spokesperson, claimed that Treasury had advised the Government to recommend an $18 an hour rise to the minimum wage. Ken Henry, himself, released a statement which said:

"I refer to recent claims that the Treasury recommended to the government that it nominate a specific dollar figure in the government's submission to the AFPC on minimum wages, these claims are false."

So today in Estimates it was all about getting Henry to contradict what Rudd said yesterday. Did it happen? Nope. Not even close.

Senator Coonan was up first, she asked about the guarantee. Henry responded:

“I know there has been considerable public interest in this matter; following a rather unfortunate and fallacious story that appeared on the front page of yesterday's Australian newspaper. In respect of the advice that was tendered to the Government and that supported the decision that it took on Sunday the 12 October, Mr Stevens and I were of one mind. I tendered the advice to the Government, and the governor and I were of one mind in respect of that advice." 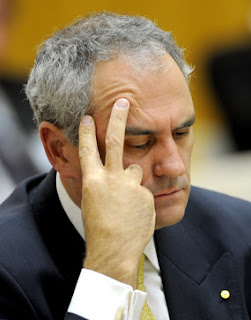 Next Senator Abetz had a go - at this point Henry, for the most part, rested his head on one hand, looking bored and contemptuous of those questioning him. Abetz tried to find out about discussions between Henry and the RBA Governor, Henry explained the two of them had been in daily discussion for a number of weeks (and in fact the whole issue of a guarantee on deposits was first raised back in February!), but that when it came to the decision regarding the 100% guarantee, they were in agreement on everything.

Abetz said "that to me doesn't have the ring of truth about it", at which Henry quite rightly took great offence (in fact it was the only time he looked at all anything other than bored). What Abetz was saying was that Henry had lied to the Senate committee - an offense which could have him charged with contempt. It was a huge assertion to make of pretty much the top public servant in the country.

But really, Ken Henry played Abetz like a cheap piano. After one long ramble by the Senator, Henry asked "I'm sorry was there a question in that?" It was truly beautiful to watch. Henry would run rings around pretty much everyone on either side of politics, and Abetz and Coonan (and especially Barnaby Joyce when he had a go) were certainly no match for him - especially as he seemed to have no problems with agreeing with what Rudd had said (the less you have to hide at Estimate, the easier it is to be bold).

To make himself as clear as he could be, Henry referred again to the story in The Oz:
"The story on the front page of yesterday's Australian newspaper was wrong. W.R.O.N.G. exclamation mark. "

So that's it then one would think. Either Kevin Rudd did act on the advice of the Treasury and the RBA when he implemented the deposit guarantee or Henry is lying.

So Turnbull goes on 7:30 Report tonight. Does he believe Ken Henry? Does he concede he was wrong to say Rudd didn't act on the advice of the RBA? Of course he doesn't. He doesn't believe Henry is lying, he just doesn't credit what he is saying.

Kerry O'Brien then pointed out that Turnbull said he wholeheartedly supported the guarantee "without reservations", "lock stock and barrel" when it was announced.

Turnbull says, yes, but that he thought Rudd was acting on the advice of the RBA. O'Brien pointed out that Stevens and Ken Henry have both said that Rudd had. Turnbull says.. well he (Stevens) chose his words carefully. (ie he was trying not to lie.)

Henry of course also chose his words very carefully today in the Estimates committee. He said the story was wrong, and he said Turnbull's input into the debate on bank guarantees was "unhelpful" (ie he thought Turnbull was just about trying to cause a run on the banks).

Will Turnbull admit he was wrong? Ever? Well no. Why? Well I think Alan Ramsey got it right last year.
Posted by Greg Jericho at 6:23 PM