After a night at the RSL, the campaign got back to the 21st Century today with Julia Gillard and Stephen Conroy in Tasmania to launch the first stage of the National Broadband Network. At the launch they also announced that the NBN would now be able to deliver a maximum speed of up to 1 gigabits per second. Now a gigabyte is essentially 1000 megabits, so since they were previously offering maximum speeds of up to 100 megabits, you can see that they certainly have kicked it up a notch. 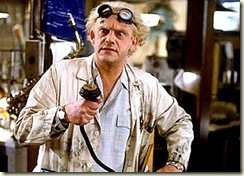 "This idea that, hey presto, we are suddenly going to get 10 times the speed from something that isn't even built yet, I find utterly implausible," he said.

You get the impression Abbott thinks all this talk about gigabits is just a lot of mumbo-jumbo that is being used to trick him in to looking like a fool. And to be honest the journalists following him around must be tempted to through in some questions like:

“The NBN Co has announced it has increased the flux capacitor on its DeLorean output to enable it to reach speeds of 88mph – what’s you response?”

Abbott on this subject reminds me of the old Not the Nine O’Clock News Gramophone skit: 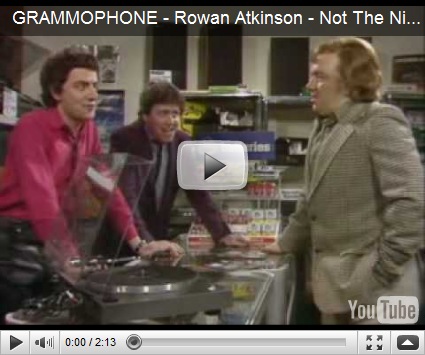 "I might want a really fantastic car, but I've got to buy the car that I can afford, not necessarily the car that in a perfect world I would like.”

Which misses the point by so far it is almost embarrassing. The NBN isn’t the car – it’s the road. Tanya Plibersek this morning on Sky News made the right analogy saying that moving from copper to fibre is like moving from gas lighting to electricity.

I know some think it will be a big white elephant,but the best thing about he NBN is the splitting up of Telstra into wholesale and retail. That is just an absolute must. But personally I think if the ALP wins, in 10 years we will look back at this debate and laugh that there was a party suggesting it not be built. I agree with what Senator Ludlam said in the communications debate on Tuesday – we don’t actually know how much the NBN will change our lives.

Now at work if our email and internet goes down work just about grinds to a halt.

We have no idea how the NBN will change our lives. And if the Libs’ dopey patchwork policy gets put in place we never will – we will look overseas and sigh.

This morning Tony Abbott was at a school in Sydney that didn’t go over too well with the BER. His message didn’t exactly cut through – it got about 1 second air time on the news tonight – because at his next engagement at the Penrith RSL where he spoke to some war veterans (though they all looked like WWII vets rather than from the Vietnam War) he was joined by Mark Latham in his new role as biggest tool of the nation 60 Minutes Reporter.

The coverage on Sky News was fantastic as their reporter gave us a blow by blow account of what he was up to – yes he’s getting a cup of coffee!! It was truly Australian political media’s worst moment (and yes I do realise I have said that a lot this past two weeks). It was such a distraction they said, so quick let’s cross back to our reporter at the scene to tell us about how distracting it is!! Kieran Gilbert, perhaps finally realising that Latham was at an Abbott event, declared soon after “I’m over the whole Latham thing”. Well yes we all were last Saturday but sigh you’re the ones who keep talking about him.

The nightly news of course made Latham’s appearance the top story so Abbott’s announcement about his policy to provide every tax payer a a tax receipt so we know where our money is being spent didn’t rate a mention. Which I guess is a good thing for him given it is a pretty dopey non-idea. You see we already get told where our taxes are spent – it’s called “The Budget” – it happens every year – second week of May or so. And as for finding out where each and every dollar of your own personal taxes go, we can already find that out on a nifty website called TaxCheck. For example if you earned $60,000 this year, here’s where your taxes went in the area of Social Security and Welfare:

So yeah, thanks Tony for promising to bring in something I can already get on the internet for free. Peter Martin likes it. I think is a bit of a gimmick that will have people ringing up talk back radio wanting to say “I don’t want any money going to family support”. So maybe it will make Government’s more careful with the spending – personally I think it’ll just encourage cranks.

Today’s big economic news was the release of the labour force figures showing unemployment had increased from 5.1% to 5.3% seasonally. In trend terms it was stable at 5.2%.

The figures were somewhat surprising – not the job growth – the economists had got that about right with an increase of 23,500 jobs in the last month. The problem was firstly the growth was in part time jobs (full time employment actually fell by 4,200), and also the participation rate increased – ie more people started looking for work.

In fact here was Joe Hockey back in 2007 reacting as Minister for Employment when the participation rate fell:

Why was he monitoring it? By Joe’s logic of tonight, he should have been happy that the participation rate was falling back then!

Say what you like about Joe, but he never saw a statistic he couldn’t mangle to fit his own illogical argument.

Julie Bishop and Stephen Smith had a debate on Foreign Policy at the National Press Club today. It was pretty dry and dull. The only thing I can remember is Bishop saying we should encourage Fiji to come back into the world community because they have produced such good footballers.

Late tonight Morgan Poll’s Labor friendly face to face poll came in with a 2 Party Preferred ALP 57.5% – LNP 43.5% It is complete tosh of course, but the ALP will like the jump of 7.5%. Momentum is a thing you always want in an election campaign, and you’ll take it wherever you can get it.

Oh geez it is! (Hangs head in shame and goes off to the store to buy a gramophone.)

Thanks - it's a bit like writing about someone's bad grammar - you can guarantee you'll make a spelling mistake while doing so.

The road analogy is ok, except with the NBN it's like having a two lane road that you can make into an eight lane expressway by merely changing the traffic lights!

And as the traffic lights improve, you can keep on doing it again and again.

It's jus about the most future proof thing put forward by a government.

Yep Big Bob it is pretty amazing. - that's a good analogy: you don't need to rebuild the road to get improvements - as the jump from 100MBps to 1GBps has shown.

Apart from polls, nbn, policies etc, the other indicator is body language. Robb/Smith's shambolic incoherence at the NBN presser, Abbott's going for his Rooty Hill comfort blanket, split-screen showing Hockey grim-faced next to smirking Swan on 730 report. ALP to win this with a slightly increased majority. Will enjoy the dissembling of MSM media between now and polling day, and their squirming afterwards.

I like the taxcheck site, but you are probably right about it being used by crank callers to tabloid radio.
One thing that stands out from the numbers is the very small amount spent on administration of welfare benefits. I am sure there is some admin mixed up with the other lines, but the pure "administration expenses" line is *only* $3.5bn out of $113.9bn.
Seeing numbers like this makes you wonder where the unspecified "efficiency savings" will come from to pay for some of the spending pormises.

When average out NBN's $45 B of servicing all Australian population the numbers look OK, when then divide over an expected life of 10 or 15 years they look even better...

Few significant changes and developments look attractive until they are considered in terms of shelf life and benefits to all potential users throughout the life of the changes.

Houses are to expensive, lets all go live in the national parks...