Goodbye Julie, thanks for the laughs.

Today Julie Bishop did the right thing and jumped before she was pushed. She gave up the job of Shadow Treasurer for the nothing position of Shadow Foreign Affairs. In doing so she avoided the Liberal party descending into a complete shambles. 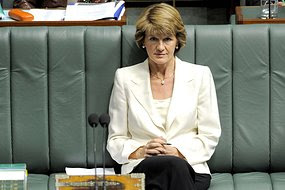 As always happens with such things, the leader makes great pronouncements about how rosy things are going. Here's Malcolm Turnbull at today's press conference:

"We have great cohesion in the Coalition,” Mr Turnbull said. “We are united and we are determined to hold this Government to account for the way in which they are mismanaging our economy today, putting jobs at risk today, and mortgaging our children's future.”

Here's what Joe Hockey (who takes over from Bishop, and who had obviously been undermining her) had to say:

"Julie Bishop has done a very good job in laying the foundations for our policy platform for the next election. I look forward to continuing my close working relationship with her over the period ahead.”

Yep, bet that'll be real close. And it must be gratifying that the foundation she has laid was so solid that it wasn't even able to sustain her own position. Guess the parable of building on sand isn't one Hockey is familiar with.

Aside from Wayne Swan, (who has now had 3 different opponents in 14 months) the happiest person in politics today would have been Brendan Nelson. Bishop was his loyal deputy for about 4 minutes, before she turned to Turnbull, and crucially in the end voted against her leader. A pretty low act for a deputy, and one that would no doubt have had Nelson indulging in a fair bit of schadenfreude today.

Bizarrely Helen Coonan has taken over the Shadow Finance role - meaning there is no one in the lower house to directly go against Lindsay Tanner - and thus he can pretty much enjoy himself hitting the opposition over the head with Dorothy Dixers.

Coonan, as one of the older members of the Liberal Party, is also a big throw back to the Howard years, and reinforces the fact that the Liberal talent pool is pretty shallow in the upper house.

One of the funniest things today was the performance by The Australian. Its chief political correspondent came out with this story:

Bishop retains Turnbull backing
LIBERAL frontbencher Julie Bishop looks safe as the Opposition's Treasury spokeswoman in the short term, despite widespread concern among her colleagues over her performance.

Still it's no worse than when Dennis Shanahan suggested last week that Peter Costello could take over Bishop's role.

I'd suggest their editor might be asking them some questions about the information they're getting from their sources.

So will Hockey do any better? Probably not. Remember he was put up as the face of WorkChoices... remind me how well that went?

Also he appeared a couple Friday nights ago on Lateline against Lindsay Tanner. Hockey asserted that the country could be in real trouble if the current account goes into a huge deficit. Tanner called him on it, and said that the ALP inherited a current account deficit of 6%. Here is the exchange:

JOE HOCKEY:...And I'd just ask Lindsay Tanner the question: what will you do if the current account deficit deteriorates? What action can you take?

Unfortunately for Joe it was. In fact in the December Quarter of 2007 it reached 7%.

The current account deficit in the September Quarter of 2008 was back to 4.3%, evidence that Australians were buying less imports (to be expected when things aren't going that great economically).

Ok, so data analysis isn't Joe's strong point. What about selling policy? Try this on for size in the same Lateline interview:

LEIGH SALES: Joe Hockey, the Government's stimulus package follows the advice of the IMF to a tee. It's won the broad support of business unions and the Treasury, yet the Opposition's decided not to vote for it. What evidence or advice did you rely on in making that decision?

JOE HOCKEY: Well, we have a range of sources of advice.

LEIGH SALES: And who are they?

JOE HOCKEY: Well, I'll tell you who backs our position, the next generation of Australians that are now going to have to pay off $200 billion of Labor Party debt and rising with an asterisk next to it. 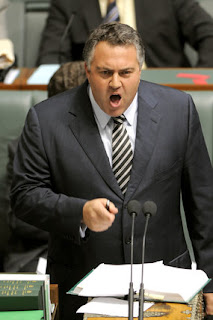 Oh good, Hockey can't come up with one economist to back the Liberal's plan, but he can say that the next generation of Australians supports it. How comforting. He also seems to be completely ignorant of the fact that if the ALP plan involves $200 billion of debt, then the Liberal's plan involves $180 billion, with the possibility of adding another $20 billion later in the year.

Look, Hockey has spent the past 14 months huffing and puffing in Question Time - yelling "shame!" and "yeah!" and "I know you are but what am I?". He went through all of 2007 uttering "union bosses" in every sentence, and Rudd seems to actually enjoy getting questions from him in parliament. So I wouldn't expect too much of him, regardless of how "avuncular" he is supposed to be.

And after all the face has changed, but the message remains the same; and at the moment, the Liberal's message is pretty poor.
Posted by Greg Jericho at 6:27 PM