With all the talk this week about how Turnbull is a dead man walking, and how Peter Costello can tun things around - or that perhaps the Liberal Party should wait till next year when its stocks are really low before turning to Costello, I thought it timely to show just how far back the Opposition is at the moment.

The excellent Ozpolitics blog has a series of great graphs displaying the polling numbers according to the various polls. He has done one graph of the newspolls since 1985, with the graph smoothed out to show the trends. Here's what it looks like (the red vertical lines are elections): 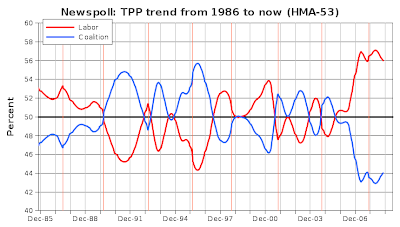 What it shows is that the Liberal Party is at the lowest ebb of any party for the last 25 years. What it shows is that all those Liberal supporters who love calling Rudd "KRudd" and who think his honeymoon will wear off soon are massively misguided.
At the moment when the ALP wins a newspoll 56-44, people start coming up with stories suggesting things are tightening up. But when you look at the graph you see that no party has ever been that low. Not the ALP after Keating lost the 97 election; not the coalition when Peacock and Howard were at each other's throats.
So yeah, maybe Costello will be better than Turnbull; but were I Costello, I'd be looking at graphs like this, and saying, "No thanks", and if things keep going the way they are, in a year's time I'd be saying the same, but leaving out the "thanks".
Posted by Greg Jericho at 9:59 PM