Pour some sugar on me

Over on the Crikey website, the excellent blogger Possum Pollytics has produced some excellent graphs on the make up of Rudd's stimulus package.

Possum really has no right to call himself a blogger, because he has an unnerving tendency to use facts rather than opinion to support his argument.

He wondered about the claim that the stimulus was just a one off "sugar hit" (a nice little sound bite that the media loves so much). So he came up with this graph which breaks down the package into tax breaks-handouts and infrastructure spending (he also has more detailed graphs on the package on his site - definitely worth a read) 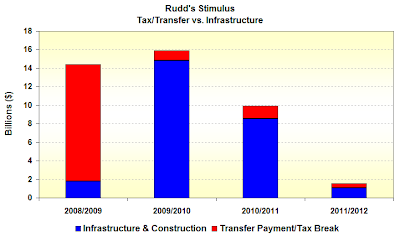 And what do we find? Well yes there is a big "sugar hit" now, but if you look at the next financial year of 2009-2010, there is just as big an "infrastructure hit". Then in 2010/2011 the infrastructure spending is still pretty big (around $8.25 billion - hardly small change, especially when Malcolm Turnbull thinks the entire package should only be $15 billion).

I guess the problem with selling this package is that Rudd didn't come out and announce the Snowy Mountains Scheme II.

While such a scheme would be nice and romantic (the "true believers" would be in raptures) the good thing about the education spend, and the roads and black spots spend is that the construction is Australia wide. It's a broad spend rather than a narrow deep spend (ie a tonne of money all spent in one area).

Now some of the commentary on the package has gotten a bit ludicrous. Dennis Shanahan thinks Turnbull has got Rudd on the ropes because of responses on "straw polls, talkback radio reaction and internet surveys". I do like some strong irrefutable evidence.

Over at The Age, Ross Gittins runs his economic slide rule over the package:

Since the revised forecasts are for real GDP to grow by 1 per cent this financial year and 0.75 per cent next financial year, you can see how much the Government is relying on this package to keep the economy out of recession.

Sounds like a pretty good reason for a Government to do something...

I doubt we'll escape it but, like most of the economists, I don't doubt the recession would be a lot worse without the various stimulus packages.

I agree - if we stay out of a recession, it'll be a technicality and it'll be by the skin of our teeth. But without the package? Do you really want to contemplate that?

In preparing this week's package, the Government has sought to comply with the Three-Ts rule of fiscal stimulus: measures should be timely, targeted and temporary.

The timely principle says governments should apply their stimulus as early in the downturn as possible.

Well that kills off Julie Bishop's "wait and see strategy".

Similarly, the targeted principle says the stimulus should go to those people or on those purposes most likely to get the money spent quickly. This favours governments spending the money themselves so that, at least in the first round of the money's flow around our circular economy, all the money is spent on consumption or investment.

This explains the support for spending the stimulus on capital works (now grandly named "infrastructure"). Trouble is, major capital works programs such as expressways, bridges and railways can take years to plan and get approvals for.

Almost 70 per cent ($29 billion) of the $42 billion is going on capital works projects. But Swan has tried to ensure the money is spent quickly by targeting it towards lots of quite small building projects.

Cue the phrase "shovel ready". Yep Snowy Mountains Scheme II sounds good, but how long do you think it would take to get going? Too long is the quick answer. It is a lot quicker to build a new library, science lab or school hall, especially as that building is not being done only in one place. (Still will need to get trained people to do it though... ah the skills crisis remains...)

Clearly, Swan's approach scores well on timeliness and reasonably on targeting, although this time the cash bonuses are going to many middle-income families who'll be more inclined to save them than would poorer people.

So get out there you middle class people - spend some money!

Malcolm Turnbull's argument that people would be more inclined to spend a "permanent" tax cut than a once-off bonus - based on the economists' "permanent income hypothesis" - isn't a strong one empirically.

"isn't strong" is a nice way of saying "complete bollocks"

Finally, the temporary principle says everything you do must be a once-off (even if spread over a few years) so that it leaves no impediment to getting the budget back into surplus once the economy is well clear of recession. Swan gets full marks on that bit.

OK, look Gittins is just one opinion, but the criticism that the government is just wasting the money in cash payouts lacks credibility. It asks you to believe that the Treasury went to the Government as said, look we need to pump up demand in the economy; you can do this two ways, spend $12b on a cash payout, or spend $12b on a huge infrastructure program the like of which you have been dreaming of for the 12 years you were in opposition. And then you'd have to believe the Government said, hell, we don't want to spend money on a big incredibly popular infrastructure program, we want to throw away $12b to buy votes because we have only won every single opinion poll since 2006, so we're feeling a little bit nervous given the election is 2 years away.

Please. The ALP LOVES infrastructure programs. It is embedded in its DNA. Every ALP PM worth his (or hopefully one day, her) salt would love to do Snowy Mountains Scheme II - if only because (if you want to get cynical) a lot of labourers and construction workers vote Labor.

Peter Hartcher (no doubt with a lot of inside info) writes how the stimulus package actually was worked out:

The hardest part would be to stimulate the early part of the year. Any projects big enough to influence the overall growth of the economy take years to mobilise. Rudd and his ministers wanted results in weeks and months.

They decided to simply send out cheques in the mail. It was the fastest way of getting money out the door.

The Government had done the same thing in December when it mailed $8.7billion to pensioners and lower-income families. Now they would do it again, handing out $11billion in "bonus" payments, most of it in $950 wads for families, in the first half of the year.

Cash handouts, however, are a poor kind of investment. They leave nothing of any value for the economic productivity or the social capital of the country. Rudd and his group decided that the cash would taper out and the emphasis would switch as quickly as possible to investment.

OK, so they knew cash is bad (but a necessary choice), so what to do about longer term investment:

But what sort of investments? For speed and effectiveness, the economic advice was to make them geographically diffuse.

Gillard's office had suggested for last year's stimulus package that schools be allocated big construction grants. This was rejected for the December package, but now its time had come.

Rudd proposed a grant for any householder who wanted to insulate a home. Officials were sent away to develop the details. Among other things, they had to covertly research Australia's capacity to produce, and install, pink batts.

In the final package, schools were awarded a total of $14.7billion over three years for building and maintenance. A further $3.8billion will go to home insulation.

But what about that horrible debt Malcolm Turnbull cares so much about (I swear you'd think Turnbull bought his own house with cash)?

Rudd was worried that the stimulus plan would get the Government into serious debt and wanted a plan to get it out again. He asked the Treasury for some fiscal rules. Henry came back with a number of alternatives, and Rudd adopted the Treasury's preferred option.

This was a pair of guidelines. First was that once growth returned to its long-run trend of 3per cent, any extra revenues would go towards reducing the deficit. Second was to limit the rise in government spending to 2per cent in real terms once the crisis had passed.

So there you are readers - hold them to it.

The Strategic Policy and Budget Committee of the cabinet considered many scenarios and hypotheses, and, so far, only one event has taken Rudd and his ministers completely by surprise - the decision by the Opposition to oppose it.

I guess they foolishly assumed the Liberal Party didn't want Australia to go into a recession.
Posted by Greg Jericho at 3:09 PM