A little bit of stimulation

This morning, surprising no one, the Government did a deal with Nick Xenophon, and got his vote for the stimulus package.

Of course Xenophon could have voted against it, ensuring Australia goes into a recession that is long and deep, but that would have been something beyond the realms of stupidity, and was not really an option.

Will the package keep Australia out of recession? That is harder to say (and on the balance of probabilities unlikely) but the lessons learned from the 1990s is that you don't wait to stimulate the economy when it is already dead. Keating's Working Nation was far from perfect, but its biggest problem was it took too long - too many of the spending measures came 12 to 24 months after the policy was announced, and after the recession had already hit hard.

This package contains a good balance of an immediate adrenaline hit, and then a good 12-24 month surge of spending directed at infrastructure (and infrastructure in an area the Howard Government cared less about than any other area - education).

Malcolm Turnbull's response after being shown to be the political eunuch of the week was pretty unsurprising, he said that :

"Today the Labor debt train has left the station, destination unknown. The Prime Minister is plunging our nation into enormous and unprecedented debt. Billions of that debt will be incurred for measures that have no enduring economic effect."

I guess he would rather spend nothing and see a real enduring effect - long term unemployment across the nation.

Still his argument today was no worse than his pitiable effort last night in Parliament when he argued against the package - it was oratory that made Brendan Nelson look calm and measured:

They will meet governments, politicians and ministers who will say to them in the future: ‘You can’t have the services you need today. The roads cannot be repaired when you want them. Your taxes are higher than your parents were paying.’

Yep it's all about the kids - not the kids of today's whose parents may lose their jobs, but the kids of 10 years time. And I do love it when a former Minister of the Howard Government talks about health services, hospitals and roads, because given the lack of attention that Government gave those things for 12 years, you would be excused for thinking the Liberals don't know such things exist.

But still at least he was better than Julie Bishop, who gave possibly the most embarrassing performance in Parliament for many a year. She was shrill, rambling, over the top, illogical, lost and confused. Those sitting behind her were not listening, and the ALP front bench didn't even bother trying to bait her. She has no credibility, and the ALP only hopes Turnbull continues to keep her where she is.

By contrast, Julia Gillard, who came on straight after, was calm, focused, and convincing. Unfortunately they don't have podcasts of speeches in the House, but were you to see the two side by side (as those watching last night did) you would see the difference between someone who is out of her depth, and someone who views the Parliament as her own paddling pool.

The speech of the night was possibly made by Tony Windsor - the Independent for New England. Here's some of what he said:

I think there were two mistakes made quite early. One was made by the government, asking the parliament to debate and decide on something as big as this in a hurry and dividing the parliament in the wee hours of the morning. I understand the strategy, but I think it was a bad ploy in terms of gaining the confidence of the people. And it gave the opposition an area to move in terms of another reason to oppose it.

The other mistake, in my view, was made by the Leader of the Opposition, when he dealt himself out of the game. It was very important, in my view, that the opposition stayed within the game, because we have established that they agree with virtually three-quarters of the package—there is some wiggle room in terms of the application of it. But, if they had stayed in the debate and moved worthwhile amendments and tried to improve or modify the legislation, they might well have been able to establish a better policy than the one that is there.

Exactly right - I think Rudd needs to show some more conciliatory noises to the Senate, but the big error was Turnbull who saw a corner, and said, yep I'll paint myself into that!

But there seems to be another agenda built into this, and that is this latent hope that the policy fails. I do not hope it fails; I hope Ken Henry and the Prime Minister and others have got it right, because if they have not got it right they may be out of a job but a lot of other people will fail within our economy.

I appreciate the debt situation, and that is what I would be focused on if we were talking about a normal global economic situation; but this is not normal. So we should not talk about Gough Whitlam and Labor debt and those sorts of things in this type of environment. This is different.

We have got to try and design a strategy that actually smooths those bumps out. Forty-two billion dollars will not cure the ills but it might put us in a position where we can come out the other end quicker than if we did nothing or did not do enough.

Amen. As I have said in the past, Rudd is not doing this because he wants to - do you really think the ALP wants to shelve all the plans they would have had back in 2007 when the boom was still going? Do you not think the ALP could think of $12b worth of "long term" big picture infrastructure projects? And Rudd's no political fool; he knows the ALP has to be very careful to avoid being tarred with the Keating brush (and I say this as a PJK fan).

The whole point of this package is to limit the damage; to try and get us through to 2011 or so, when China and the USA might get back on board (we hope). 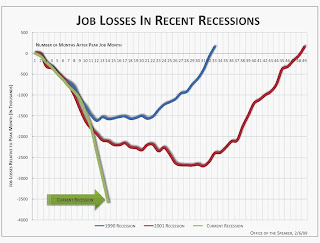 How bad are things overseas? Peter Martin showed this scary graph of comparing the US unemployment in this recession with past ones

So we could wait I guess and hope for the best, but one might think that somewhat unwise, were one to have a skerrick of intelligence.

And so it is done. Parliament has a week off, and when Turnbull comes back on the 23rd he will be greeted with another Newspoll, and that brings us to the crux of the last two weeks.

Turnbull's decision to oppose the package had nothing to do with economics - because he knew it would pass, and thus his decision was purely political. And so what is his gain? His job now is to convince voters that regardless of what happens in the next 18 months that if the package hadn't been passed the economy would be better, and failing that, to convince the public that deficits are the biggest economic bogey man of all time.

It will be a difficult argument, especially given his already low polling numbers - the voters have not taken to Malcolm in any serious way; and it's hard to convince an electorate that you are right when they don't even want to listen to what you say.

Tony Windsor had something to say on the politics of this as well. He realised a lot of this package involved a quasi "test of manhood". He offered this advice:

I really believe that we have to back off here a little bit and forget who has the political margin to play with, who is in front, who has the biggest loan and who has not. Maybe it is time for the Prime Minister, the Leader of the Opposition, Nick Xenophon and others to put their hardware on the table, maybe subject themselves to circumcision and revisit this debate.

Now that is oratory!

And with that let's end the week on an upbeat note, and in lieu of the $42b stimulus coming our way, here's a clip of the sadly forgotten 80s band Wa Wa Nee and their hit, Stimulation.