The Economy: up is down?

In the last couple of days a few interesting economic figures have come out that suggest that running an economy is a complex thing.

The most recent figure announced was that unemployment had decreased from 5.7% to 5.4%. To say this is a shock is to put it rather mildly. Economists don't like being shocked - especially when they have all predicted that the complete opposite would happen.

So they shot the messenger. It was, they argued, all the fault of the Bureau of Statistics - the ABS had got it wrong. Now admittedly there is some weight to their argument. The ABS has decreased the sample size it uses to work out the unemployment figures (due to some rather dumb cutbacks by the Government). But even still, let's use some perspective. Peter Martin points out

"The ABS standard estimates say we can be 95 per cent confident the true change was somewhere between a drop of 33,300 and a gain of 87,900 people in jobs".

All statistics have a confidence value and a standard deviation. Maybe this figure is a statistical blip, maybe not. My gut feeling is that the reality is that there was not a rise in employment, but that due to the participation rate falling, the actual unemployed figure hasn't gone up either (as yet).

But for now these are the only figures we've got; so let's take them for what they say.

And what they say is good.

The other news out today was that the construction industry may be past its worst. The Australian Industry Group's Construction Index did fall in April, but the fall was slowing and suggested an upturn in the coming months. Especially given the schools funding programs about to kick into gear

Yesterday there was also news that Australia had recorded its largest ever trade surplus - ie the amount of exports we're earning over the imports we're buying. Our coal and iron ore exports were holding up quite well. Imports dropped 10% which isn't actually good because it means we're not importing materials for construction or products for selling in shops (what we want is imports to grow, but not as much as our exports).

But still, the steadiness of our major exports is very good news.

Then there was the news on Tuesday that the RBA was not dropping interest rates. This is good because it suggests the RBA is not in panic mode, and can see a light at the end of the tunnel. In fact it said as much in the statement it put out:

The global economy contracted further during the first few months of this year. While the near-term outlook remains weak, there are further signs of stabilisation in several countries. The Chinese economy in particular has picked up speed in recent months and many commodity prices have firmed a little. The considerable economic policy stimulus in train in most countries should help contain the downturn and support an eventual recovery.

The final bit of good news was released yesterday and put to bed any doubts about whether or not the December stimulus package (the "cash splash") had worked.

Retail sales rose 2.2 per cent in seasonally adjusted terms to $19.3 billion in March, this was despite economists expecting it to rise only 05.%. (not a good month for economists' predictions). The reason why this is so good is that it comes before the second stimulus package was released in April, meaning that people were still spending money gained in December, or at the very least feeling confident enough to spend in anticipation of the April lot of $900s.

The ABS has a nice little graph that Peter Martin has used to show the impact of the stimulus: 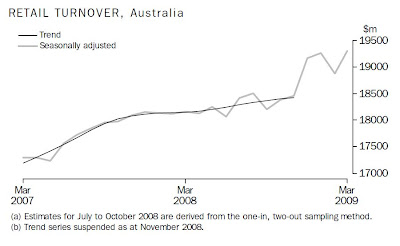 Look at the trend line which cuts out at December last year. Do you think that trend line was about to zoom up? Nope, me neither.

Do you think it was probably going to at best flat line? Yep I agree, though a pessimist would look at what was happening in the rest or the world and think that trend line was about to go down - and sharply.

What the stimulus package did was increase retail sales. And that is exactly what it was put in place to do.

It worked! And it pumped money into the economy effectively.

So the next time a friend of yours tells you about how Rudd threw money at people and it all got saved you can call "bullshit" on them. It was not all saved - far from it. And neither was it all spent in one hit - you know that instant "sugar hit" that is soon forgotten. The spending continued above trend for December, January, February and March. (Which let's be honest is what you would expect - some people spent the money, others used it to pay off their credit card, and then a month or so later, because their credit card was clean, they went out and spent).

Now your friend can argue that the stimulus should not have been done with cash payouts, but then ask him if he was prepared to wear a flat line, or (more likely) a huge drop in retail sales, and all the job losses that go with it?

Your friend could argue that money should be spent on infrastructure - and he'd be right. Any more stimulus to come should be on mid to long term infrastructure. But the $10b spent on stimulus in December, you should remind your friend, was targeted to work in the short term. It was put in place to keep jobs now, and hopefully keep jobs in place till the mid-term infrastructure measures (you know all those buildings that are about to start happening in schools) kicked in.

And it worked. Without any shadow of a doubt, it worked.

Was it good policy? Well you can debate that all you want. But you can't argue that it didn't achieve what it was meant to achieve.

Now look, obviously it is not all plain sailing ahead. On Tuesday it was announced that car sales continue to fall, and job ads are still declining - meaning unemployment will rise.

But so far, the things the Government have done have worked the way they were supposed to. And that's good news as well.
Posted by Greg Jericho at 6:42 PM