It's a bit better than Pong

Today, with some money I was given for my birthday, I bought a copy of Crysis.

Now Crysis is a bit of a Shibboleth. To those who know what it means, it means everything; to those who don't, it means nothing.

Crysis is a computer game. A first person shooter (FPS) to be exact. It is also a game that requires a computer with a fair bit of grunt. Last year (just prior to starting this blog) I bought a new computer from a computer market - a quad core processor with 4GB RAM, shirtloads of hard drive, and a pretty good video card (9600GT - could've gone for something a bit better, but my budget limit had been reached). When I was working out what to get, I looked at what specifications were recommended for Crysis, and went a bit better than those. So if someone tells you they bought Crysis, you can take it as given their computer is a tad more powerful than a Commodore 64.

Prior to this I had a laptop from Dell that struggled to allow me to listen to itunes while using Microsoft Word. And as for playing any decent games? Fuhgedabouditt.

I've never owned a Playstation or Xbox, and to be honest I doubt I ever will. I can't see my wife letting me use the TV to play games. Also, I like the demarcation of my PC being for games, the TV for TV (or DVDs).

It would be a lie though to call me a hard-core gamer. I wouldn't know the first thing about World of Warcraft apart from knowing I have no desire to play it. I don't go in for on-line games and I am as likely to play a Tiger Woods golf game as some futuristic FPS.

A few months ago I was at a meeting involving some people who deal with the computer industry, as a way of getting the meeting started they went around the room to find out what was the last computer game each person had played. Some of the older ones struggled to come up with anything other than Solitaire. My choice at the time was Call of Duty 2 - a WWII first person shooter (I own six FPS, five are WWII themed). 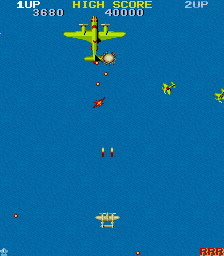 But it got me thinking. I have loved computer games since I first came across them down at the local community centre at 20 cents a pop. I think the first real game I ever paid to play was probably 1942 - I wasn't a huge Pacman or Space Invaders fan, but flying a fighter plane in WWII? I was hooked. 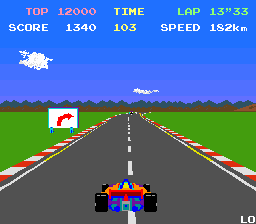 ames of table tennis on Wednesday nights in 1985-86 would probably be considered a waste of money, were it not for the fact that I held the fastest lap times for the Monza and Suzuki circuits.

But if there is one guaranteed rule about computer games, it is that when a new one comes out you never think anything could possibly look more real, and that when you look back years later at that game you realise how dated it looks.

Back in the early 1980s, I had some relatives who had an Apple II. The game to play at the time on that system was Choplifter. At the time I could have played it all day without even entertaining the possibility o f tiring. Now, it just looks so pathetic that I doubt I'd bother for more than 5 minutes.

In the early 1990s, I had a cousin who had a Sega Mega Drive. He and I could spend hours playing golf against each other, or baseball or ice hockey while our girlfriends at the time sat in the dining room doing whatever they were doing (we used to get so involved we would forget to blink and our eyes would get sore from dryness; so worrying about other people in the house was not a high priority - rather amazingly both of our girlfriends saw through this nerdish unsociability and still married us).

I got my first PC in 1993, a 386SX- with a turbo button that would allow the processor to get up to 16Mhz (my current PC goes at 2400MHz - though it does have 4 processors doing that speed...). The only game I had of any worth was the fantastic Civilisation. As I have progressively upgraded my computers, I have upgraded my versions of Civ, and now have Civilisation 4 ready to play and cost me hours of my life as I attempt to build a nation from one solitary tribe in 4000BC.

And yet as I say, I'm not a hard core gamer - I don't have special headphones or mouse - but I own probably close to 30 games. Some of these are updates - eg I have every Tiger Woods PGA game since 2003, others are just games I bought a few years back and really should just chuck out, because no matter what I thought back then, they are never as good now.

And that is a bit of an odd thing about computer games. Because they are so linked to technology they don't have the shelf life that movies do (let alone books). Civilisation for example had a great game play, but were I to play it now, it would be difficult to get past the lame graphics and tinny sounds to actually enjoy it. 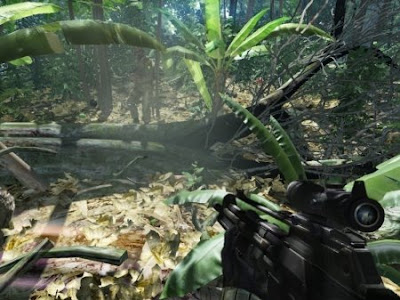 It's why Crysis is the Shibboleth that it is. It is not widely known outside the gaming world - not like say Tomb Raider or Doom, but for those who are gamers, it is known as being a supreme test of your computer's capabilities. (And also the subject of nerdy on-line disputes over whether it is better than Call of Duty 4)

It was released in 2007, and even now most computers non-gamers buy would struggle to play it at the best settings. It is a game that seemingly has tried to get ahead of technology in an effort to increase its longevity.

And while it does look fantastic, what freaks me out, is knowing that just as was the case with Choplifter, in 10 years time, I'll look back at Crysis, and think, what a rinky-dink little game. But for now, I'll just shake my head and think - they'll never get more real than this.

Below is a list of computer games that would be in my autobiography:

You’re lucky. i also fan of crysis, i mostly enjoy this.

Not suprised your wife isn't keen on using the TV to play shooting games. Here's a hot tip nothing says love to your wife more than to buy her a Wii, Wii tennis, love-15 love-30....I'm tipping you'd be hard pressed to beat her at the tennis. The Wii is amazing in that it appeals to all ages.