Whew, finally we can leave 1988 and High School behind. 1989 was a big year for me. I spent the year in Japan on a student exchange, and perhaps for the first time started looking elsewhere for music than the Top 40.

Sure up till that point I was into some older stuff, but by and large my music came from the radio rather than a record collection. In Japan a big thing at the time was CD rental stores, which meant you could rent out a CD, copy it onto tape and thus within a short period of time I had a pretty wide collection.

But this is about songs linked to that year, so while The Who's Tommy is indelibly linked for me with 1989 it hardly is a 1989 album.

I did listen to a lot of radio that year as well - mostly the Armed Forces radio Network that the US has in Japan to be listened to by all those on the many Army bases they have there. The AFN played a number of programs from US radio, and the one I listened to pretty regularly was Rick Dees Weekly Top 40.

Now back in those dark ages, music rarely got released in Australia at the same time as in the US, so it meant I was hearing songs about 5 months before my friends back in Australia. In my letters back home I would give tips of songs to look out for, and one tip I distinctly remember writing was to look out for a Swedish band called Roxette, and the prediction that their song "The Look" would be huge.

When it did become a big hit, none of my friends of course could recall me telling them so, and thus my career as a guru of the pop music industry came to a halt. Probably just as well given my magical predictive powers were based purely on seeing what was a hit in America.

But be that as it may, Roxette, that funky duo from Sweden get my Song a Year, in competition form other worthies as Paula Abdul's "Straight Up", Fine Young Cannibals, "She Drives Me Crazy", Skid Row,'s "18 and Life" and anything by Tone Loc. What a year!

Roxette of course would actually be a band that would go on to bigger and better things. The singles off their "Look Sharp" Album were pretty infections - Dangerous, Dressed for Success and Listen to Your Heart, and then in 1990 they had a huge hit from the Pretty Woman soundtrack, "It Must Have Been Love".

You'd never die in a ditch for Roxette - they weren't that kind of band. But for a good while in the early 90s you could scarce go into a pub or nightclub without hearing at least one Roxette song. And generally they were pretty decent listening.

One other song is 1989 for me. In the middle of the year, my sister sent over a tape of one morning of the SAFM Morning Zoo (hosted by the recently dearly departed John Vincent). It was a very treasured tape for me at the time - back in the days long before the internet and live streaming. On the tape, just before the 7:30 news break was played a song I hadn't heard before. I was sure it was by U2, but the DJ's didn't mention the name or the band. It certainly wasn't on any of the U2 albums, so I assumed it was a B-side. 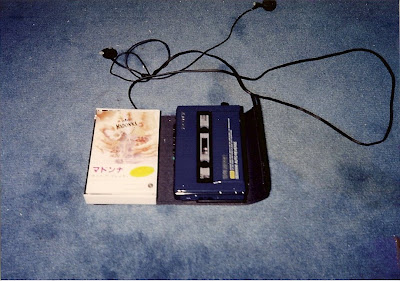 I played the tape over and over, and especially this myseterious U2 song. That year for my birthday I was given by my host parents a walkman that was amazingly small compared to the big clunky ones available in Australia. In truth I think I didn't see the type available in Australia for another 2-3 years.

It was my most treasured possession (there it is on the right wih a tape of Madonna's Like a Prayer" for scale).

Then I went on a school camp to Nagasaki (amazing experience). In the bus as we toured around I would put in the Morning Zoo tape and try and get it in sync with the actual time, and thus was able to feel like I was for that 60 minutes, back home.

When I got back to Australia, I discovered the song was the B-side of the "All I want is You" single (do they even have B-sides anymore?) - "Everlasting Love". I quickly bought the "cassingle", and the song to this day makes me think of how I dopily left that bag on the Bullet Train, and I pine a little for that great Walkman. (It's also a damn fun song):