The book beat me… for now.

A few weeks ago on The Australian's book blog A Pair of Ragged Claws, there was a bit of a discussion about re-reading of books, and also about books that defeated readers.

For a long time I was guilty of starting and not finishing novels. I wouldn’t do it on purpose – and in fact it would happen even with books I was enjoying. I 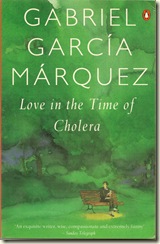 got 100 odd pages into Love in the Time of Cholera when for some reason lost in time I stopped reading it and began something else.

Normally when I stop in the middle of a novel it is because I have started reading a non-fiction work – or more likely have just been reading odd bits from some of the more encyclopaedic works I have sitting next to my bed, and then it’s a couple weeks later and I realise I haven’t read the novel for so long that I’ve lost the feel of it, lost the impetus to read it, or even have just forgotten the characters. 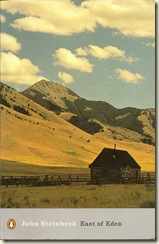 It got to such a point that my bedside table had about 4-5 novels with bookmarks in them and I realised a drastic step needed to be taken. And thus in January 2008 I actually made a New Year’s Resolution (which I generally think are complete tosh) to finish every novel I started. And I have kept it (well mostly). The resolution is more not to start reading other books while I have one on the go. If I choose to stop reading a book it is a definitive step, rather than an “oh I can read three novels at once” thing.

At the moment I am 500 pages into Steinbeck’s East of Eden. And I have to say in the past, I would probably have dropped it by now. It’s a good book, well written (of course – it is Steinbeck), but with 100 pages to go I have to say I’ve stopped caring about the characters. To be honest the whole book has been a bit of a battle. No character has really connected, save one secondary character who died some 100 pages back. I am now rushing to the end – more so I can put the book behind me with a clear conscience than out of pleasure. Oh look the book is good, and it isn’t like pulling teeth. It’s just 600 pages is a lot of words to get through when you don’t really care how it ends (and given it’s based on the Biblical story of Cain and Abel I think I know how it is going to end anyway…).

But were I to stop now, I’m not sure I would say the book beat me. More I just couldn’t be bothered fighting it. 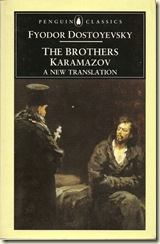 I have stopped mid way through a number of novels, but I don’t say they have beaten me – more the fight has been put on hold. Thomas Mann’s The Magic Mountain is a beautiful novel, but the pace is bloody slow (it’s meant to be, so as to replicate the absence of time in the TB sanatorium). My book mark is at page 206. And I know one day I’ll get back to it. The same can be said for Dostoyevsky’s The Brother’s Karamazov. Now Dostoyevsky is a great, great, great writer. But he demands a lot. He writes psychological fiction of the highest order.

And Karamazov is no light read – it delves into the dark places of the soul and asks deep questions about life.

The book mark on the second attempt is at page 92. (which sounds very short, but I think this was one of the last books I started reading before I made my resolution). I’ll get back to it soon, but it’s not a book to read if there are any other stresses in your life.

I once started reading Bleak House and then about three chapters in decided to look at the appendix and discovered the entire plot. So I stopped straight away determined not to read it until I had forgotten who was the daughter of whom etc. I did in time forget. And then BBC did a mini-series of it, and of course I watched it, and then thought bugger it, I might as well read it. Which I did – and as with all Dickens knowing the ending doesn’t really matter.

The last book I stopped mid-way through was Seth’s A Suitable Boy. We have it in the three separate volumes edition. I stopped about one chapter into the second volume. Basically I stopped because the second volume began by concentrating on a character I didn’t like, and so thought, after 500 odd pages, I deserved a rest from post-partition India. I’ll get back to it, but it’s such a huge tome that taking it in separate bites isn’t too bad. 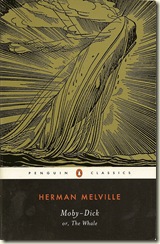 One big book did defeat me though. Moby Dick was just too much for me. I set to reading it one Christmas holidays. And I loved it. For 300 odd pages I was in raptures of this sea-dog tale. I loved how Ishmael would go off on tangents and seemed to get distracted by whatever came into his head about whaling and seagoing. But then I started realising, there hadn’t been mention of Ahab, and what about Moby Dick? My brain started screaming “Get to the bloody point!” And then on page 493, with Chapter 103 “Measurement of a Whale’s Skeleton” I put the the book down and said, “enough, you win! That's all I can stand. I can’t stands no more”.

I then began reading Mann’s Buddenbrooks, and perhaps had as enjoyable a reading experience as I ever have had.

I don’t think I’ll ever try Moby Dick again. I know enough people who say it is fantastic to think I probably should try. But it’ll have to wait at the end of a very long queue. One book beat me on page 2. Joyce’s Finnegans Wake. If there has even been a more self-indulgent piece of over-rates tripe ever written, then I want to go no where near it.

Look Joyce was a genius. Dubliners, Portrait of the the Artist… and Ulysses are amazing reading, but his last book was a waste of the 17 years it took him to write it. Who cares if it tries to reinvent the wheel? Who cares if it is “ahead of its time”? It’s bloody impenetrable. Yeah there are nice jokes like calling a funeral a “funferall”, but check out this sentence from page 2 and ask if you’d keep going: 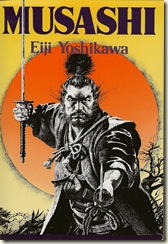 Would you keep going for 628 pages? I know a former Professor of Australian literature, a few English Lit Senior lecturers, including one whose area of focus is Modernism, and a couple English Lit PhDs. None have got past page 3.

But I’ll finish East of Eden, and my next book will be one abandoned on page 186 – Eji Yoshikawa’s Musashi. When I stoped reading it, I was absolutely loving it, but something happened that meant I went about 3 weeks without reading and so I forgot characters and parts of the plot, and generally lost the vibe of the book. I decided to stop and try it again when I had forgotten everything and thus wouldn’t feel like I’m going over old ground. It’s been about 5 years so the time is ripe. Now all I need is to finish off those last 100 pages of the Steinbeck. Or I could just stop now….