No change in this fortnight's Newspoll on the two-party preferred. 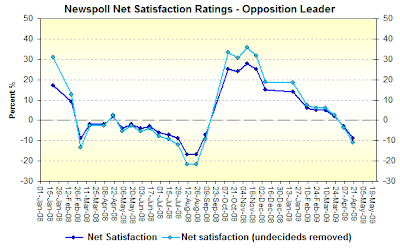 Possum Comitatus over at Crikey has this spiffy graph that shows the decline of Turnbull.

After a good recovery from the negative territory of Brendan Nelson, Turnbull has been falling ever since.

All the rest stayed in the negative, and all were deposed.

In the last month the Liberals have tried to get Rudd by attacking his China connection, his bad temper, and now have gone back to 2001 with the asylum seeker debate.

Nothing has made a dent

The Newspoll also asked about asylum seekers and which party was best to handle the issue:
ALP: 27%
LNP: 26%
Uncommitted: 33%

That the Liberals aren't even seen as the ones best to handle this issue anymore shows just how far they have fallen. And the fact 33% don't really care also shows how little this issue rates in the real world.

A more telling question was that of whether stronger laws would reduce asylum seekers:
Yes: 36%
No: 57%

Which shows that the Australian public is not as dumb as the Liberals (and to an extent the ALP) thinks they are. They know that if the world numbers of asylum seekers goes up, then the numbers of those coming to Australia will go up.

So where to from here for the Liberals?

They can't kick out Turnbull yet. They have to wait until the Budget on 12 May, to see if the Govt does something terribly wrong. And then?

I still can't see Costello doing anything - he'll never challenge, and he won't take over until... well probably never (or unless he is guaranteed to win the election, which is not going to happen).

I'm waiting for Newspoll to start asking who would people prefer as leader - Turnbull or Hockey. Once that question is posed (and assuming Hockey wins or is at least equal), expect the real number crunching and back stabbing to begin (well ok, it has already started).

The good thing about Hockey is that he is seen by those in the party as a Costello man - and so Pete can be the power behind the thrown.

I don't think it'll do much good, but it has become blindingly obvious that the Australian people don't like Turnbull. They see him as standing for nothing except whatever will get him to be PM. This would be ok, except people don't even know why he wants to be PM.

I wonder if he even knows the answer to that question himself - other than he views it as a personal Everest which must be conquered to sate his ego.
Posted by Greg Jericho at 5:21 PM