Today Malcolm Turnbull in episode 6,537 of his series of "I can't stop myself from saying something regardless of the facts" came out and declared the Government's December stimulus package a failure. He was pointing to the decline in retail sales in February of 2% and referring to rumours of another stimulus package to be released in the May budget. He said:

"If it's another third spendathon, certainly we wouldn't [support it]. But we'll see what he proposes. Who knows, he may come up with something that makes sense, but based on the last two, it is a very, very poor use of Australian taxpayers' money.

All we've seen is unemployment rising, we've seen economic growth slowing. It's apparent from the retail sales figures yesterday that the cash splash did not work. Some of it was spent but the vast majority was saved, and yet we hear in the press that Mr Rudd is contemplating a third stimulus package."

Apparent is it Malcolm? Ok yes if you just look at the decline in the retail sales figures in February it does sound bad. But let's have a real look at the figures - as Peter Martin has done.

Martin has looked at the figures through December, January and February, and discovered that

Retail figures from the Australian Bureau of Statistics show that while seasonally-adjusted spending slipped 2 per cent in February, it remained close its record high. Over January and February Australians spent more than in any two-month period in Australian history.

He has a nice graph to display what happened: 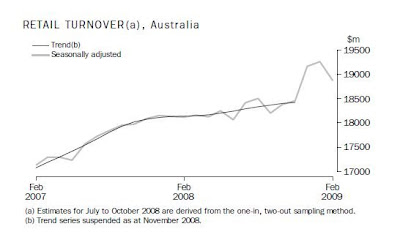 As you can see at the end of 2008 the graph zoomed up (and remember this is seasonally adjusted, so it is already taking into account the usual Christmas spending), and yes it has dropped in February - but it's obvious it is still well above where it would have been without the stimulus package.

How much above? Well Martin calculates that at least $1.8 billion more was spent in December to February than would have in normal times.

But we also know that the economy at the moment is not a case of it being normal times - in fact without a stimulus package everyone expected sales during those three months to fall (as has happened in the US, UK etc etc). So while an extra $1.8b was in the economy based on normal times, given things were worse than normal, it is logical to assume that much more than $1.8b of the stimulus package went in to the economy.

Now you might think that is bad for the economy because stimulus equals debt, but just ask yourself, how many less job would be going around the economy if it weren't for the spending boost? You think all those retail shops employ people to stand around selling stuff to nobody?

So let's put an end to all those stories about "the stimulus package failed". The point of the stimulus was to get people spending in December to February. They did. At least (and almost certainly more) $1.8b of the $8.9b was spent (at least 20%). Much of the rest (around $3b) was used to pay off credit card debt, which means people feel freer to spend money now and up until the next bonus comes into everyone's accounts.

You may think it's bad policy, that will cost us in the long term. That's fine; argue that. Just don't say the package didn't work - or that everyone saved it and didn't spend it. The package set out to increase spending and stimulate growth. The data is now in - and it worked, in fact it worked just as they hoped.
Posted by Greg Jericho at 6:51 PM