On the QT: Looks like there’s been a super profits tax placed on blue steel

Today I viewed Question Time though a drug addled haze from cold and flu tablets and the fumes of Vicks Vapo-Rub that may have influenced my understanding of what was going on. For example I could swear that I heard Liberal MP Judi Molyan asking Kevin Rudd a question about the RSPT based on the words of a self-confessed “simple man” who didn’t know much about the whole tax-thing. But I’m sure that couldn't have happened – that would be far too silly.

I also am sure I heard Bruce Billson ask Rudd about the effect of the RSPT on the price of “baby-bum” powder, but again I must have been temporarily doped up on Codral, because surely the debate about such a massive tax wouldn’t be reduced to such idiocy.

The one thing that has never quite been explained to me is why a tax on super profits increases costs of businesses, and thus an increase on prices – as has been suggested again and again by Liberal MPs. The tax is only charged once all the digging up and selling has occurred. The RSPT will not change the behaviour of miners doing this one bit – it has no impact on how they dig stuff up, nor the price of doing so. It has no impact on the price they sell the stuff because the tax is not a tax on the actual minerals – like for example are the state royalties. All the RSPT does is once this has all been done it takes 40% of anything over 6% profit.

To suggest that this will have a massive increase on prices is to suggest that currently miners are not setting a price to maximize their profits. If they are, then all that will happen after the RSPT is put in place is that they will continue to set a price so as to maximise their profits. All that will change is that that profit will be less because the Government will take a greater share. So this tax is not about increasing the cost of mining, it is about giving the Australian taxpayers a greater share of the profits – and in the process reducing the returns of profits to the miners (compared to now).

So while it may sound good to say the RSPT is increasing the price we are charging mining companies to dig stuff out of the ground, that is not actually how it works – that is how the royalty works – because that is a volume tax – companies pay an amount dependant on how much they dig up – so you increase that and you without a shadow of a doubt increase the cost, and therefore will cause an increase in prices.

The RSPT though does not distort the mining process – which is why economists like it – economists hate with a passion any taxes that distort consumption or production (one reason they hate tariffs and subsidies).

But still what do I know? My Economics Degree is pretty old now, and suffering from a fair bit of lack of use, if only there was a group of eminent economists around to tell me why the RSPT is better than the royalty regime… Oh wait there is! Today, 21 economists and Clive Hamilton (not sure why he was included) penned an open letter advocating a move to the RSPT. They wrote:

There is no reason to expect a net contraction in mining over the longer term as a result of replacing royalties with the proposed resource rent tax. This is because a tax on economic rent of non-renewable resources is a more efﬁcient way of raising revenue than taxing mining production (royalties).

Royalties tax production no matter how proﬁtable. A resource rent tax only taxes production when it is proﬁtable and only after all costs have been deducted. If the project does not make a proﬁt, some of its costs are potentially refundable or otherwise claimable. This means the Government shares the risk associated with exploitation of our minerals resources. So, the proposed design for the RSPT effectively only taxes those proﬁts over and above the hurdle rate of return for a mine (that is, its risk-adjusted cost of capital), after allowance is made for the proposed 40% rebate of the cost of developing each mine.

Anyone think that sounds confusing? Of course according to the media the RSPT is terribly complicated – and of course it’s not their job to explain things…

The RSPT will reduce the proﬁtability of mining companies and the value of the exploration and mining rights allocated to them by Australian governments on behalf of the public. The current high proﬁtability of these companies means that this is an appropriate time for them to adjust to a more efﬁcient and equitable system of sharing the value of those rights.

The RSPT has been criticised on the basis that revenues are dependent on cyclical ﬂuctuations in mining sector proﬁtability. In reality, this is a substantial advantage of this aspect of the tax. The counter-cyclical nature of tax revenues will help to stabilise both the macro-economy and the level of activity of the mining sector.

This last bit means that when profits are down, the tax return goes down – so it works with the economic cycle, not against it. You can argue about what will happen to the Budget if the “boom” ends, but that is not an argument against this tax – it is an argument against what the Government is planning to do with the proceeds.

But back to Question Time. The first question was asked by Tony Abbott and, in keeping with every Question Time since admitting on the 7:30 Report that he is flexible with the truth when talking, it was his only question. Today Rudd made note of his absence – wondering if the Libs tactic committee would let him ask anymore questions today.

The first two Dorothy Dixers to start proceedings were to Stephen Smith. Both questions might as well been worded, “Please tell us why Julie Bishop is a complete fool”. 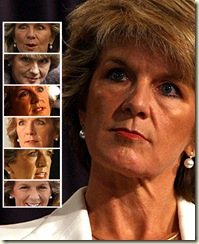 Smith absolutely slaughtered her for her work yesterday; taking her apart bit by bit. It was obvious that she was unsettled by the whole thing because she had a fixed fake smile on her face and she also looked anywhere but in the direction of Smith. As someone on twitter observed she was acting like a dog when it is being told off by its owner. No where to be seen was her “blue steel” look (so called by Annabel Crab), nor was there her standard smug self-satisfied expression. Nope instead she looked down, looked to the side, pretended to find something that Chris Pyne had said was hilariously funny, and all in all looked like the poor little rich girl being told off in the Principal’s office.

Smith’s approach was calm and reasoned – he laid out the charges, presented the evidence and made Bishop feel about the size of a ant. The opposition hardly raised a peep during his attacks, and Bishop certainly didn’t try a point of order like she does when being slapped around by Julia Gillard. It was a joy to behold.

The rest of Question Time went along with very little ado. In fact the whole RSPT debate seemed to be out of puff. Joe Hockey asked a couple question about the Government's use of the Markle-Shakleford study that Swan dealt with pretty easily, but it all smacked a bit of yesterday’s news. And then apropos of nothing Abbott was up moving a censure motion against Rudd and Swan for quoting the wrong figures over the effective rate of tax paid by the mining companies.

There was absolutely no momentum for such a move; they hadn’t been targeting Rudd at all – all the questions on the issue had been directed at Swan, and yet for some reason they threw Rudd into the censure mix as well. 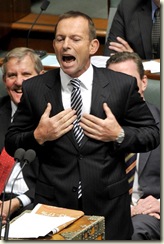 It was bizarre. And all it allowed was to give Abbott 10 minutes to be at his absolute ranty worst. He was incredibly shrill (and given the way my throat was feeling, I grimaced at the thought of the numbers of throat lozenges he’d need to suck afterwards). It was the type of performance that explained why ever since he became leader he has had high unsatisfactory rating – it was off putting and enough to have me searching for the remote to hit the volume button. He seemed so unhinged and desperate that really anything he was saying was lost in the cacophony coming from his mouth.

It was the type of performance you usually expect from a leader just about to be dumped – a real “let’s try and show my backbenchers I can be all tough and hairy-chested”. Not that I’m suggesting he is about to be dumped, just that it was not a performance you’d normally see by someone in control – this is perhaps mostly because the purpose of the motion was to try and ensure the news wasn’t all about Julie Bishop being eviscerated by Smith. 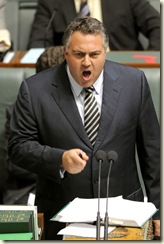 He was followed by Joe Hockey trying to be equally as shrill – he almost succeeded. “Angry Joe” is not a good look.  As Shadow Treasurer he has to realise that he needs to provide some counter to Abbott – he should be “the calm guy” – the affable one – you know good-cop to Abbott’s bad cop. Instead we just had two angry old men – without wit and full of bile. Great perhaps for Liberal MPs and hard core voters, but a big turn off for any swinging voter.

Wayne Swan responded on behalf of he and Rudd – Rudd obviously deeming it a censure motion not worth his response – and given both he and Swan were the ones being censured, and given Swan had been the one most targeted, Swan was the logical one to respond. He did well – sure he wasn’t able to counter the fact that the Government had overegged the study – but he showed again how much improved he has been this year. ANd his tone of voice was a lovely respite from the shouty Abbott and Hockey (though not quite at the calm and measured Stephen Smith level)

The vote was held and of course the Govt won.

And then Anthony Albanese had a Dorothy Dixer and Peter Garrett was given his first question for a very long while, but I have to say few were paying too much attention – least of all me as feel asleep hoping I’d wake minus my flu-ridden head and in a world where the media regards Stephen Smith as a better Parliamentary performer than Tony Abbott – though I’d probably need to take something stronger before that will happen.

Another excellent recap of QT Grog.
I especially liked your explanation of the RSPT...it was so simple even a wingnut can follow it (not that they'd want to).
I just wish your explanation was picked up and trumpeted from pillar to post...the most effective undercutting of the Opposition's arguments against it I've seen yet.
Well done!