The week’s Flick of the Week takes us with Kevin Costner from the baseball feel-good fable, Field of Dreams to this role of Crash Davis in the baseball reality of Bull Durham.

It’s hard for those too young now to remember the early 1990s to just realise how big and popular was Costner. He seemed to be headed straight to the Hollywood stars Hall of Fame. 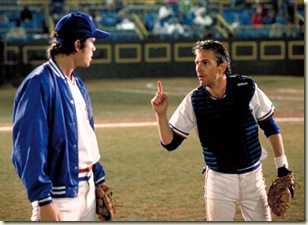 Bull Durham was made in that brief period where Kevin Costner was perhaps the most likeable actor on earth. The Untouchables, No Way Out, Bull Durham, Field of Dreams, Dances with Wolves, Robin Hood: Prince of Thieves, JFK, The Bodyguard, A Perfect World was an incredible run of roles and films – in fact that run of good films is almost Tom Hanksesque (and in many ways, Hanks took over the role of most likeable actor on earth from Costner). Sure some are not classic art, but they were all popular, and a number have lasted extremely well – and A Perfect World is seriously underrated. Then came the over long and mundane Wyatt Earp, then the overlong and mundane Waterworld, then the overlong and mundane The Postman, add in a divorce in 1994, and the golden period for Costner was over.

As it is, that run of films would probably get him voted into the Hall of Fame (especially when you add in his fine work in Tin Cup, For the Love of the Game – another baseball flick – and I can even cope with his Boston accent in Thirteen Days – probably because I’ve never been to Boston). And while it’s been over a decade since he was in anything close to a box office hit, you can;t deny that Bull Durham is a film that has held up amazingly well over 20 years. 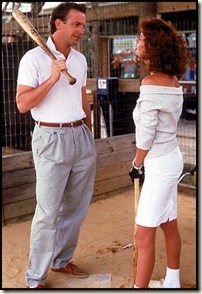 The film involves Costner as Crash Davis an aging catcher in the minor leagues, who brought onto a minor league baseball team (the real life Durham Bulls) to mentor a young cocky pitcher – Ebby Calvin LaLoosh (Tim Robbins). The line on LaLoosh is that he has “a million dollar arm and a ten cent head”. Thrown into the mix is Annie Savoy (Susan Sarandon) a baseball lover, and lover of baseball players. Each season she picks one player to sleep with, and that player invariably has a great year. She narrows her choice down to Crash and LaLoosh, and thus begins a great tale of love, life and baseball.

Costner is pitch perfect as the aging warrior – a guy who has the brains but not the talent. He is the sporting Salieri. He knows what greatness is, and he knows he doesn’t have it. His record as the player to hit the most home runs in the minor league (a record that doesn’t really exist as there are so many levels that constitute “minor league”) is a wonderful symbol of a player who is good enough but not great enough.

The film is definitely a romantic comedy – and Sarandon and Costner are a great match – but it is also one of the most brilliant examinations of what it means to fall short of your dreams. The dialogue by writer-director Ron Shelton is witty and sexy, adult and intelligent – featuring the classic monologue by Crash on what he believes in. 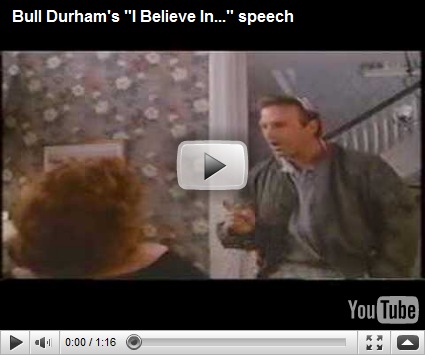 It’s not perfect. Tim Robbins has the cocky demeanour down pat, but they guy does not look like he can pitch. It’s a serious flaw, but he makes up for it with his dumb swagger. His “Nuke” LaLoosh is every wanker sporting guy you’ve ever known who couldn’t count to six, but is somehow earning six figures because he can play sport. At the start you want him to fail, and yet you know he won’t as Annie says “the world is made for people who aren't cursed with self awareness”. That said by the end of the film he has matured somewhat, you don’t mind him succeeding because you feel that Crash and Annie have contributed to his success. But you also know he will soon forget them.

Best of all the film makes the game seem fun – Crash telling the batters what Nuke is going to pitch, or getting Nuke to hit the mascot; and the great work done by Trey Wilson and Robert Wuhl as the managers Skip and Larry produce some great interplay that makes you wish you were a part of this team  or at least someone in the stands supporting them. 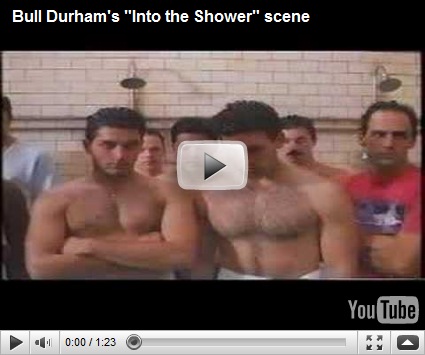 Soon after, the pretty derivative Major League came out. That film is an absolute crock – give it a wide berth and instead stay with this (bizarrely you’ll find it in the bargain bin at JB HiFi for $6.98) the most fun and one of the baseball/sports films of all time.

Ebby Calvin LaLoosh: How come you don't like me?
Crash Davis: Because you don't respect yourself, which is your problem. But you don't respect the game, and that's my problem. You got a gift.
Ebby Calvin LaLoosh: I got a what?
Crash Davis: You got a gift. When you were a baby, the Gods reached down and turned your right arm into a thunderbolt. You got a Hall-of-Fame arm, but you're pissing it away.
Ebby Calvin LaLoosh: I ain't pissing nothing away. I got a Porsche already; a 911 with a quadraphonic Blaupunkt.
Crash Davis: Christ, you don't need a quadraphonic Blaupunkt! What you need is a curveball! In the show, everyone can hit heat.
Ebby Calvin LaLoosh: Well, how would you know? YOU been in the majors?
Crash Davis: Yeah, I've been in the majors. Yeah, I was in the show. I was in the show for 21 days once - the 21 greatest days of my life. You know, you never handle your luggage in the show, somebody else carries your bags. It was great. You hit white balls for batting practice, the ballparks are like cathedrals, the hotels all have room service, and the women all have long legs and brains.

Great review and good choice in movie clip. Funny thing is in real life Costner DOESN'T think Lee Harvey Oswald acted alone ^.^
I think I miss those seemingly more 'innocent' times when all it too was Costner to make a film.
Who does that now? Pitt? Meh....
Even goldenboy Hanks is not putting bums in seats like he used to.