Flick of the Week: “At least he is not a book burner, you Nazi cow”.

This week’s Flick of the Week takes us with Ray Liotta from his role as Henry Hill in Goodfellas, to that of “Shoeless” Joe Jackson in the baseball fable Field of Dreams. 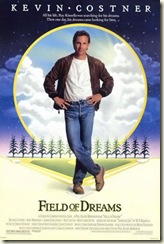 The 2010 Major League Baseball season begins on Sunday in America with the Yankees meeting the Red Sox at Fenway Park, so it is apt for the this week’s flick of the week to be a film about baseball and one in which a game at Fenway Park is crucial to the story line.

The film, based on the novel “Shoeless Joe” by W.P Kinsella, concerns Ray Kinsella (Kevin Costner) who with his wife (Amy Madigan) has bought a farm despite him having no idea how to farm. One evening while out in his corn field (the farm is in Iowa) he hears a voice saying, “If you build it he will come.” He comes to believe the thing he must build is a baseball field, and that if he does “Shoeless” Joe Jackson – who had been suspended by major league baseball for his role in the throwing of the 1919 World Series by the Chicago White Sox – will come back from the the dead to play. Despite all thinking him mad, he builds the field and sure enough Joe Jackson comes out of the corn field and plays (and so too do other players of the White Sox team, as well as other players of the era).

Ray then hears another voice which he thinks is telling him to seek out recluse author “Terrence Mann” (James Earl Jones) and “ease his pain”, because apparently Mann’s first love was baseball. He thus goes in search of Mann, and takes him to a game at Fenway Park.

The film is a love poem to baseball, a remembrance of things past, and about the connection between fathers and sons. It is up there with The Shawshank Redemption on the list of films that grown men will admit to getting a bit teary while watching. 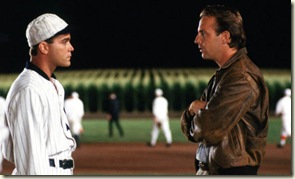 It’s easy to be cynical about Field of Dreams – it does require you to agree that baseball is the American pastime, and that chasing stupid dreams is worth nearly wrecking your livelihood, it also contains a great deal too much nostalgia for “the sixties”. It’s really a film for baby boomers, but I can cope with that all, because I do love baseball, and also the film is never pretentious in its narrative – it doesn't ask you to think this is the most serious movie you will ever see – it’s not aiming for tears like say “Play it Forward” – and it also shows both Ray and his wife questioning their decision to follow the voice, so the film is never too syrupy.

There are things wrong with it – for a start if you are going to make a film which has the central conceit that Shoeless Joe Jackson is coming back from the dead to play, you think they would have made sure that the actor playing him would bat left-handed as did Joe Jackson, and not right handed as does Liotta. Could you imagine making a film featuring Bradman and having him bat left-handed?

A letter to ESPM’s Sport’s Guy, Bill Simmons also pointed out that as Terrence Mann is a black-radical writer from the 60s there is no way he wouldn’t think to complain that none of the players from the Negro Leagues were able to come back from the dead and play as well. It’s actually a crucial omission by the filmmakers, made I suspect because in the novel the reclusive author is actually J.D. Salinger. 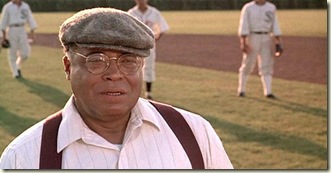 The film has a wonderful cast – Costner in a role perfect for the late 1980s’ Costner; James Earl Jones having just he right amount of gravitas as Terrence Mann, Amy Madigan is feisty as all get out as Ray’s college sweetheart wife, Annie – she’s great in a scene in the local school meeting where the issue is the banning of certain books from the library; Frank Whaley in his “that guy” mode as the young Archie Graham; Burt Lancaster in his last role in an American film (he was 76 at the time); and Timothy Busfield (from TV’s thirtysomething and The West Wing) as Annie’s unbelieving brother Mark.

All work together – never taking the premise too seriously, nor treating it as a joke – the tone is important in such films, and this one gets it perfect. Only at the end when Mann recites the speech about how “people will come” does it feel a bit too self indulgent; but this is quickly erased [SPOILER ALERT!] by one of the most magical endings, when Shoeless Joe explains to Ray (and to the audience) that the whole purpose of the film was not to bring back Shoeless Joe, or to get Mann out of retirement, but that the “he” who will come is Ray’s dead father, and the pain that will be eased is Ray’s as he will be able once again play catch with his dad with whom he had long been estranged. It’s an ending that gets to me every time, maybe because I spent so much time in my youth playing backyard cricket with my dad, and so can relate to the emotions of recapturing lost time.

It’s wonderful film – leave your cynicism to one side and have a magical couple of hours.