Tony Abbott today gave a speech to the Lowy Institute on “National Security Fundamentals”. Of course the speech included talk about asylum seekers – because of course when you’re talking about Australia’s national security you have to make sure we’re protected from the helpless and needy. Aboott suggested that should he win Government:

that one major acquisition, as soon as possible, would be three unmanned Global Hawk Surveillance Aircraft. In a day, a Global Hawk can keep under surveillance 40,000 square nautical miles. These aircraft would help to protect the vast oil and gas projects now progressing on the North West Shelf. Real time surveillance and their vast area of coverage should allow much earlier detection and interception of illegal boat arrivals. Improved intelligence would also make it easier to track and help boats in danger of sinking. 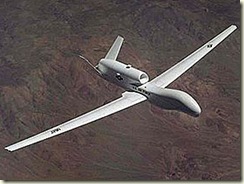 These cost as cool $100 million each, so Abbott’s anti-asylum seeker policy (forget the bullshit about protecting our vast oil and gas projects) is to buy three high tech planes to detect slow moving boats carrying asylum seekers to this country. This is to “protect our borders” – despite the fact none of these slow moving boats has actually made it to the mainland under the Rudd Government.

But here’s the thing: why are the boats coming? Abbott has spent the last 5 months telling everyone that the reason the boats are coming is the Rudd is soft on asylum seekers, and that if he was PM, he’d bring back the tough Howard Government policies that would stop the boats. So if his policies will stop the boats why spend $300 million on planes to find boats that won’t be coming?

Riddle me the answer to that one readers.

Abbott also said this about Australia’s commitment to the war in Afghanistan:

The extent of our commitment to Afghanistan is once more in question now that the Dutch, who currently take the lead in Oruzgan province, are preparing to withdraw their 1,900 troops, as well as their F16s fighter-bombers, helicopters, tanks and hospital later this year.

The Rudd Government has said that it is unwilling and unable to take command in the province and to increase our commitment even to approach the current Dutch contribution. It would be a poor reflection on our defence capabilities and value as an ally if we are truly unable to help. Certainly, General Jim Molan, the Australian former chief of operations for the multinational force in Iraq, says that we could and should take the lead in Oruzgan province.

It’s no secret that the Americans would like additional Australian forces in Afghanistan and have refrained from making a formal request only because they have been told that it would be unwelcome. … If satisfied that the role made strategic sense and was compatible with our other military commitments, a Coalition government would be prepared to consider doing more.

Should it be made, a commitment to do more in Afghanistan would be one sign that Australia is entirely serious about its overseas responsibilities. It would build on the reputation Australia established during the Howard years as a power that well and truly “punched to its weight”.

Excuse me while I throw up. 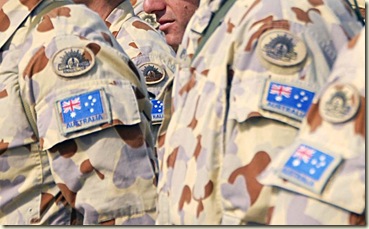 You see, for Abbott sending Australian to war is all about reputation and – like it’s some sort of global Olympics – to show that Australia is punching its weight (you get the feeling he’d like us to be punching above our weight).

Is this guy serious?

So his major foreign affairs policy if elected is to send more troops to Afghanistan (because you sure as hell know America will ask, now that Abbott has said he wants to send them). What an utter fool.

Sending Australian to war is not to be done just so the PM can feel like a big man. What an utter disgrace. And also stupid. As Vera on Poll Bludger pointed out, on the ABC page covering the story, in the “related stories” list it has an article on General Cosgrove giving a speech at Abbott’s February mini-2020 summit. That story is headed:

No support for expanded role in Afghanistan: Cosgrove

In the speech Cosgrove said this:

"In my view the weight of policy value and political risk are against an expanded and thus extended Australian role and military presence in Afghanistan.

Taking on greater responsibility in the conflict is "marginally viable from a resources point of view" and would "create policy difficulties and certainly some political downside".

Australia has tested what was traditionally a strong sense of limitation on engaging in "wars of choice well beyond arm's reach" in recent years.

"In a policy sense, in terms of demonstrating our willingness to test the boundary of that part of our policy, Australia would hardly have done more over the last decade."

And yet Tony wants to go to war… but just look at what Cosgrove said: increasing our support in Afghanistan is "marginally viable from a resources point of view" – ie we don’t have the resources (manpower and equipment) to do it. But you see this all feeds into my suspicions of what Abbott would secretly like to do. You see thins week it started with denying the dole to people under 30, he wants to send young people away from their homes to get work, and now he wants to increase Australia commitment in Afghanistan despite us not having the resources to do it. So how to fill that deficit of resources? How to ensure those under 30 unemployed leave home and get a job… well it all fits nicely doesn’t it – bring back national service!

Will he announce it? Of course not (well I would say of course not, but given his thought bubbles, we shouldn’t rule anything out) but you just know, deep down he would love it.

I'm a little bit amazed we managed to get reports on anything other than rugby league today.

Will TA's daughters enlist, perhaps? Is this a devious plot for TA to gain more space at home?

One of the puzzles regarding Abbott's "dolebludgers" war was why he chose the upper age limit of 30.
This would include many individuals who are married with young children, not so obviously a portable group if they were faced with having to move to say, Western Australia, away from family supports. But it is a lot more palatable from a conservative point of view to force such men and women(?) into the "glories of National service" if there was no ready work available in their own family area. Problem solved for age groups to 30.

Thanks Grog, excellent analysis as usual.