Lost in the wonderment of Malcolm Turnbull calling it quits, the RBA raised rates by another 25 basis points (that 0.25% to you non-economic types). 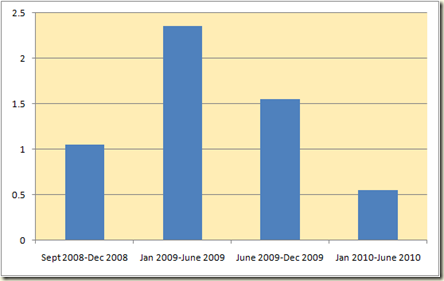 Where the numbers on the Y-axis represent the amount the cash rate was below the 10 year average of 5.3%.

As a home owner, I hope I was not being too optimistic.

But as you can see from the below graph, rates are getting closer to the average mark, and as they get closer the problems for the Government will increase. Up till now the raises in interest rates have been common sense. There is no way anyone with any intelligence on economic matters (ok we’re ruling out Joe Hockey here) expected the RBA to keep rates at 50 year lows.

But as we get into the territory that they were at under Howard (very briefly it must be said) people will be feeling less conciliatory towards any raises. 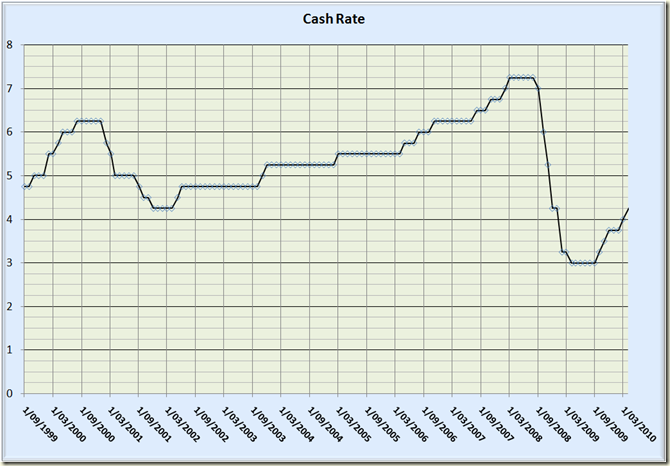 So let’s have a look at the statement put out by the RBA to justify the increase:

The global economy is growing, and world GDP is expected to rise at close to trend pace in 2010 and 2011. The expansion is still hesitant in the major countries, due to the continuing legacy of the financial crisis, resulting in ongoing excess capacity. In Asia, where financial sectors are not impaired, growth has continued to be quite strong, contributing to pressure on prices for raw materials. The authorities in several countries outside the major industrial economies have now started to reduce the degree of stimulus to their economies.

This will be used by Hockey and Abbott to say the Government should wind back the stimulus, of course ignoring the fact that it already is – the wind back was built into the package.

Australia’s terms of trade are rising, adding to incomes and fostering a build-up in investment in the resources sector. Under these conditions, output growth over the year ahead is likely to exceed that seen last year, even though the effects of earlier expansionary policy measures will be diminishing.

Note that Joe Hockey: “the effect of earlier expansionary policies will be diminishing” – ie the stimulus has actually been wound back. (Here’s hoping someone in the media throws this back at him when he inevitably wheels out the “wind back the stimulus” line). And as for the terms of trade? The Government can’t do much about trying to stop China and India wanting to buy our iron and coal.

Inflation has, as expected, declined in underlying terms from its peak in 2008, helped by a noticeable slowing in private-sector labour costs during 2009, the rise in the exchange rate and the earlier period of slower growth in demand. CPI inflation has risen somewhat recently as temporary factors that had been holding it to quite low rates are now abating. Inflation is expected to be consistent with the target in 2010.

Inflation is expected to be consistent with the target in 2010 – ie nothing in the Government's stimulus is causing inflation to increase such that the RBA wants to raise rates to kill it, and that is always the big concern with Budget deficits – if they are causing inflation to increase, then the only way it will be reduced is through interest rate rises. That is NOT the case with this rise.

The Board judges that with growth likely to be around trend and inflation close to target over the coming year, it is appropriate for interest rates to be closer to average. Today’s decision is a further step in that process.

Which means, the RBA wants to get to that average. What is the average? Well Glenn Stevens said somewhere around 5% (though the average for the nine years from September 99 to September 2008, just prior to the Global Financial Crisis, was 5.5%).

And therein lies the danger for the Government. The coming Budget will be closely watched, if commentators believe it to be too expansionary, it will be harder and harder for Rudd and Swan to say they are innocent of any blame for interest rate rises, especially if they go over the average.

They’re not at that point yet, but in an election year, a Government that thinks it can not worry about interest rates, is a Government fooling itself.