Newspoll ALP 54 – LNP 44 (or Health, Stimulus and the English Language)

Today’s Newspoll was for the first time in a while announced on last night’s Lateline. Dennis Shanahan even made an appearance to discus it. When news of this broke I was sure the results would be bad for Labor. But I must say that we can bury that conspiracy theory for now. The results came in at the rather unexciting two party preferred of ALP 54%, LNP 44%. This was a drop (as expected) from the pretty roguish poll of 56-44 last time. No one really expected the ALP to improve from that position. No one except Dennis Shanahan of course. Here he was last night on Lateline:

DENNIS SHANAHAN: …
I think the important thing out of that is that we haven't seen a continuation of the drop which the Coalition experienced three weeks ago after the debate and after the paid parental leave announcement. So, the losing of the ground from the Coalition hasn't continued. That's an important thing for Tony Abbott.

Though he did admit:

To be honest, Shanahan was pretty reasoned and objective on Lateline. Would that translate into reasonable and objective articles in today’s Australian? Did you really need to ask?

Labor whacked on boatpeople in Newspoll

The horror!! Just looking at those headlines you’d think the ALP was dead. But you would be wrong, because you see, “Scuttled” in political terms now apparently means winning an election with a 47 seat majority. I do like it when The Australian enhances the English language to give it a much more rich and indeterminate meaning. Yes, apparently Labor has been “scuttled”. Given that scuttled generally means to sink something on purpose, it seems according to The Oz that Labor has intentionally sunk its own election hopes and resulted in it winning an election with increased margin. Riddle me that one folks.

Of course the reason behind these two headlines is that the Newspoll asked who was best to handle asylum seekers. The LNP was in front 44 to the ALP 26. This was a big change since it was last asked back in November, when the LNP was in front 23 to 20. But big deal. So the LNP is massively favoured to handle asylum seekers: is it an election changing issue? Nope. How do I know? Look at the Two Party Preferred – 54-46. If there was any link between the two you would think a jump in the LNP of over 20% would result in some increase in the LNP’s 2PP. But no. People might not like asylum seekers, and they might like the way the LNP says it will handle them, but not enough for them to want to change the Government over it.

This election – as every other one in history – will be about the economy, health, education and the economy. 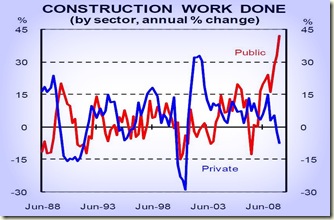 Which brings me to the stimulus and episode 427 in Michael Stutcbhury’s campaign to say the stimulus spending should be stopped. Today his argument was that the recession is over, so the spending on education stimulus should stop:

The program may have had some credibility in February last year, less than five months after the Wall Street financial crisis hit, when the government announced a $42bn "nation building" stimulus that included free ceiling insulation for 2.7 million Australian homes and "large-scale infrastructure" in every primary school.

Note the “may” – he still ignores all evidence that the stimulus held up employment in the building sector – employment which otherwise would have gone through the floor. Here’s his reasoning, and dismissal of the Global Financial Crisis:

But 14 months later it makes no economic sense at all, given we now know that the global financial crisis was then downsizing into what the Reserve Bank of Australia calls a North Atlantic financial crisis and the Australian economy was about to get a booster shot of export demand from China.

The line about the GFC being a “North Atlantic” crisis has got a bit of a run of late from the conservative side, but they are all invariably quoting Reserve Banks Governor Glenn Stevens massively out of context.

Stevens said the line in February at the Standing Committee on Economics. He was being asked specifically about the capital adequacy of banks liquidity. Liberal MP, Bruce Billson asked him about Australia’s banks having to sign up to an international agreement that was focussed on American and European banks saying:

Mr BILLSON— That sounds like a very North Atlantic solution to a problem that does not exist here.

Billson was not suggesting the Global Financial Crisis was just a North Atlantic thing, but that North Atlantic banks are under different regulations to and were facing different liquidity pressures to Australian banks (he’s right). Here was Glenn Stevens’ response:

Mr Stevens—….It is a very good phrase: the whole crisis actually was very much a North Atlantic crisis. It was really only a global crisis for six or eight weeks, I think. The rest of it is mainly a North Atlantic story. There is a problem with liquidity and the problem was that institutions relied on the assumption that wholesale markets would always be open at a reasonable price and they just were not open, and those people came into serious problems. So there does need to be, I think, a genuine effort on the part of financial institutions to think more about liquidity risk. 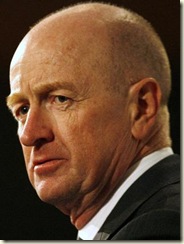 So when Stevens was saying a "North Atlantic crisis” he was SPECIFICALLY referring to the liquidity risk of banks. But Stutchbury has no problems saying the Stevens actually was referring to the entire Global Financial Crisis. I don’t know about you, but to me that is pretty dishonest reporting (or is it just incompetence).

Stutchbury then went on to suggest:

But there is virtually no chance that halting the uncontracted BER billions would plunge the economy into recession.
…
The government's line that the economy would have gone backwards in three quarters last year without the overall stimulus is not backed by revised national accounts estimates. There are more unemployed now than just before the crisis hit, but that was when the economy was overheating and the Reserve Bank's cash rate was 7.25 per cent, rather than 4.25 per cent.
…
Non-dwelling construction would not collapse if non-contracted BER spending were halted.

Yes you see employment was high prior to the crisis (remember that crisis which was apparently only a North Atlantic thing) because the the economy was overheating – so I guess Stutchbury now thinks the GFC was the recession we had to have… And as for his suggestion about the strength of the building sector? Well luckily we can go to Stutchbury’s favourite economic analyst, Glenn Stevens, for a view on that, as today the Minutes of the last Reserve Bank board meeting were released. Here’s what it said about non-dwelling construction:

The business surveys suggested that business conditions and confidence were both at above-average levels. However, there was some variation across sectors, and some caution in spending plans outside the mining sector. The non-residential building sector remained subdued and, abstracting from the surge in construction of educational facilities, new approvals were at relatively low levels.

The other news of the day of course was the Health deal brokered at the COAG. Was it “historic” as suggested by Rudd? Well yes and no. Colin Barnett from WA held out on giving away 30% of his share of the GST, meaning he wants the Commonwealth to give him the GST and he’ll give them back 30% (or something like that). 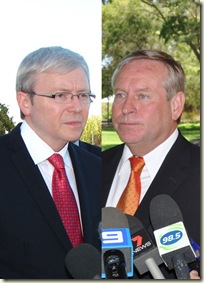 It all sounds (to quote Kevin Rudd from the 7:30 Report) like an accounting measure, but Barnett couldn’t really back down as he had said all along he wasn't going to give up the GST. Western Australia is always a bit tetchy over the GST carve up – believing it gets ripped off as it is. This will play ok in WA, but I wouldn’t be surprised if a deal is done out of the glare of COAG.

Most of all the COAG deal skewers Abbott. His big complaint has been (as he said in his opening address in the Health debate):

Mr Rudd's scheme won't provide an extra bed, an extra doctor, an extra nurse or even an extra dollar before 2014 at the earliest.

From July 1 this year the Australian Government will start delivering $5.3 billion in additional funding over the next four years to provide:

In other words – lots of extra beds, doctors and nurses before 2014, meaning Abbott was left to say that because WA hadn’t signed on, it wasn’t really a national deal and thus Rudd had failed, and the bureaucracy will be bigger, and where’s the money coming from etc. 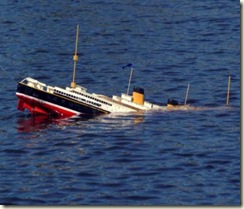 Well now. Good luck with that, and good luck explaining how the extra money going in to hospitals and the creation of local networks is no good (especially when it is so close to what Abbott himself wants to do). That said Rudd and Swan will need to show where the money comes from, but I’m guessing they went into the COAG knowing how much they could afford to spend; if not, the Budget will be interesting.

Abbott wanted to be able to go to the election saying Rudd had broken the promise on fixing the health system. With this deal and the money starting from July 1, that ain’t going to fly. But all is not lost for Tony, perhaps he can hope the Health deal will “scuttle” Rudd, though if we go by The Australian's understanding of the word, that might see the next poll Rudd in front 56-44.

I did love how the 'whacked' headline was positioned next to the news of Carl Williams. Nice juxtaposition there, guys.

"Scuttle" can also mean "to move hastily" or "a container like an open bucket (usually to hold and carry coal)". Maybe Shanahan is using the word in one of these senses. He says strange things sometimes. Or maybe the Oz's subeditors like making fun of him too. I know I would.

Good one Grog. You are always a pleasure to read.