It’s Friday night, who wants to think about bloody economics or politics (errr best ignore the post just below this one)?

Tonight is a night to kick back, and if you’;re anywhere on the south-eastern seaboard listen to the rain beating down (hope the flooding is not too bad).

One thing I love about YouTube is the mash-ups people do of movies – where they take a movie and mix it with the music or dialogue of another movie. Usually the lame ones just take any film and put on the Brokeback Mountain theme and suggest the movie is about a homosexual affair. But an excellent one came out a couple days ago – one which take Toy Story and mixes it with the John Wayne western – True Grit (for Toy Grit naturally) (Screendoor Slams has alerted me that the mash up is actually the Coen Bros soon to be released version of True Grit, not the John Wayne one. That would explain why you can’t hear the Duke’s voice!). 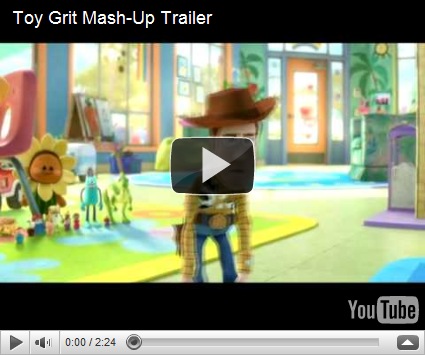 With the news coverage of the Chilean miners my thoughts turned to the great Billy Wilder film Ace in the Hole. Last night on Twitter, film critic Thomas Calwell noted how for those who have not seen it, they will be shocked at how cynical the film is for one made in 1951 (it’s easy to forget cynicism did not start with your own generation). The film is perhaps the most biting and black take on journalism ever put to celluloid. It is a must see for anyone in the media, and anyone who consumes what the media produces. 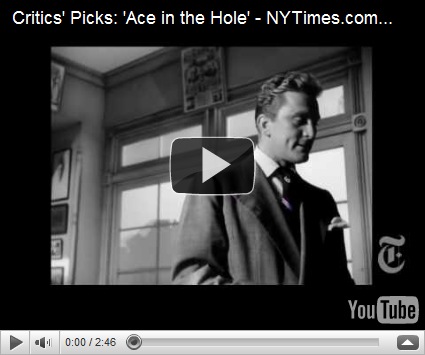 Just to be a pedant, the True Grit that's 'mashed' with Toy Story here is the (trailer for) Coen Bros remake of True Grit with Jeff Bridges not the 1969 John Wayne.

Ace in the Hole was prominent in my mind during the whole Chile thing as well. As was the Simpsons' homage Radio Bart; yep, I was humming "We're sending our love down the well" along to ABCNews24. Amazing how the Simpson's went to that (slightly obscure)movie in only its 3rd season. It shows how remarkably clued into America that show has been over its twenty something year span. Which was further reiterated with the remarkable 'Banksy' title sequence just this week.

Is it? Cheers for that. I didn;t realise - will change!

Then Banky sequence was extremely good - though The Simpsons has often slighly referenced that their cartoons are made in Korea - eg The Itchy and Scratchy Movie episode (and yes, I am a Simpsons' nerd - hell I wrote part of a PhD Thesis chapter on them!)

And then we sometimes see examples of journalism that exemplify dogged research, fact checking, objectivity and honesty. I am thinking of Woodward's "Obama's Wars" that I just finished reading. True, it is often so complete that it is deadly boring in its account of meeting after meeting in or around the White House about Afghanistan, but it reveals a number of truths, some of which are inconvenient. In passing it also demonstrates that US journalists seem to have much more access to official information, even classified information, than do journalists in this frightened little country.

yeah i've been thinking it went a lot better than Ace in the Hole. tho I've always called it Big Carnival. a few quizical looks had me googling, yet another movie with two different names. i think Big Carnival is better. I think that the national Library has a decent print in its rigidly temperature and humidity controlled little hands
dylan agh