It is probably a sad indictment of my life that I can relate most of my youth to Coca Cola adverts.

The first one I can remember was this from 1979. To a young seven year old, the sight of the people jumping around inside the huge ball looked like more fun than any person could possibly have. I can also recall my Mum pointing out that it would have been bloody hot inside that ball, and so it probably wasn't all that much fun. 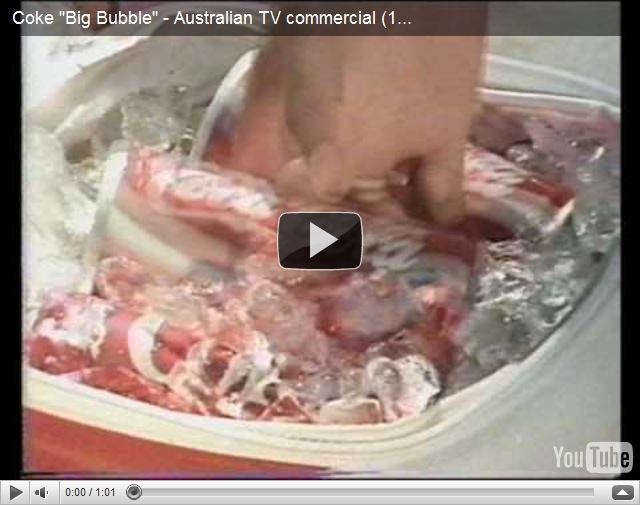 The next advert to really resonate was the 1983 one with the giant hollow inflated Coke can. Who didn’t want to grab onto one of the handles and be whizzed over the top? My Mum at this juncture would point out that she hoped they weren't doing this shallow water, because if they were there would be a chance that one of them could hurt their neck if they hit the bottom and thus cause spinal injury. 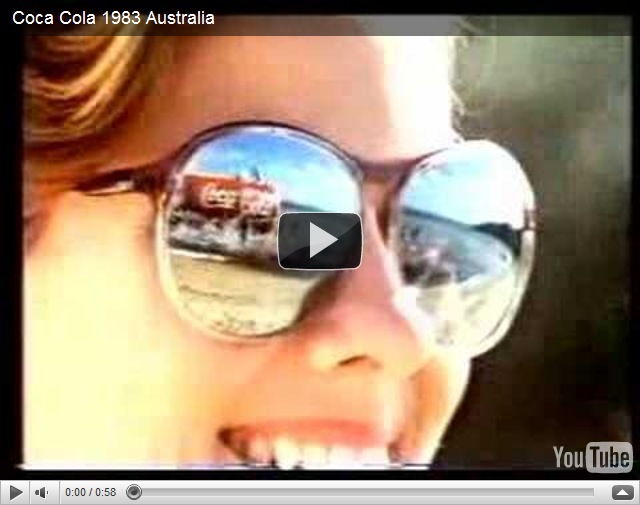 The Coke ad in 1987 was somewhat un-subtly influenced by The Big Chill – which was rather odd given The Big Chill was 5 year’s old by this stage. My Mum was completely ignorant of The Big Chill so she didn’t really have any comment on this advert, and probably didn’t understand why me and my best mate wanted to invite around some girls one night while there were out and make hot dogs and drink Coke. 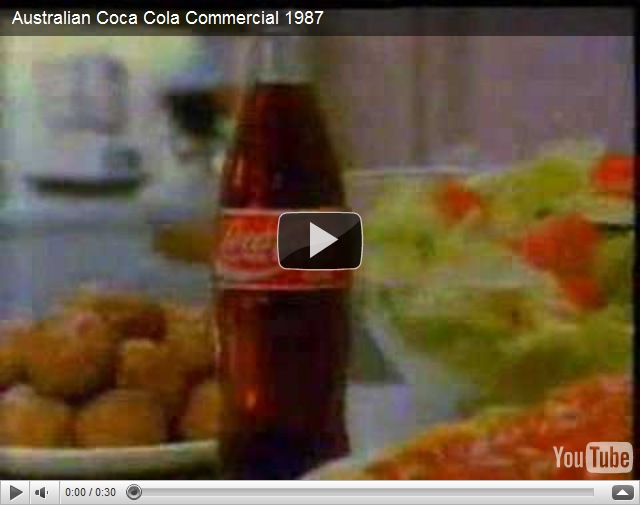 When this advert came out in 1988 I was disgusted. Firstly I hated the Ganggajang song “Sounds of Then (This is Australia)” and so hated this advert (not like the good old days when they had a inflated Coke can – I suggested to my Mum, who by this stage was wondering what the hell I was on about), but also I was disgusted that a band would sell out so easily. 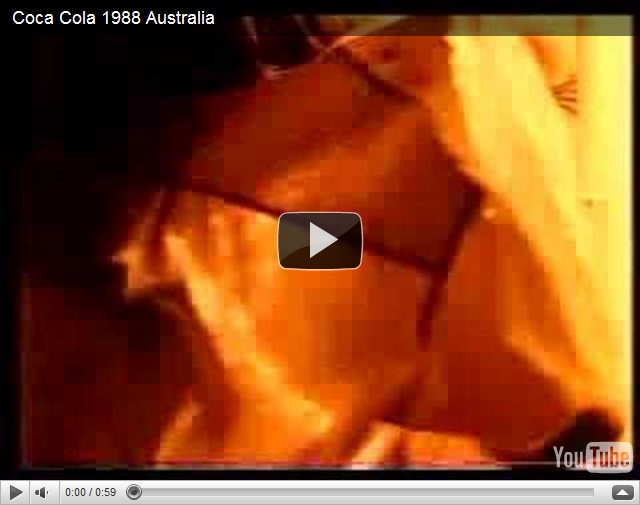 This advert in 1992 was trumpeted as being the first Australian Coke advert that got a run throughout the world. I liked it – yeah it was good, and I could see why the kids liked it… but really sky surfing? Really? Is anyone seriously going to do that? Though I did have to admit I was still waiting to get invited to a beach party where there was a giant inflated Coke can… 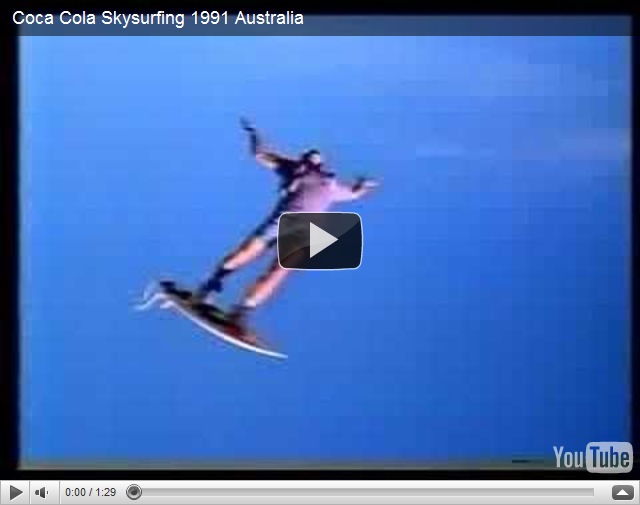 The last Coke advert that really resonates from my youth is one from my late Uni days. It was the one that marked the change from “The Real Thing” to “Always Coca-cola”. When I first saw it, I couldn’t believe that Coke had abandoned the “summer vibe”; had thrown away all those years of fun in the sun with friends drinking Coke. What a joke. And yet I found myself humming the damn jingle, and actually finding I liked the advert. I liked the artwork, and for some reason it just had a vibe that felt right, felt now, felt the 1990s. Now when I look back at them all it is actually my favourite – most likely because of the period it reminds me of, but also because for some reason that I don’t quite understand it is the one that makes me want to drink a Coke the most. 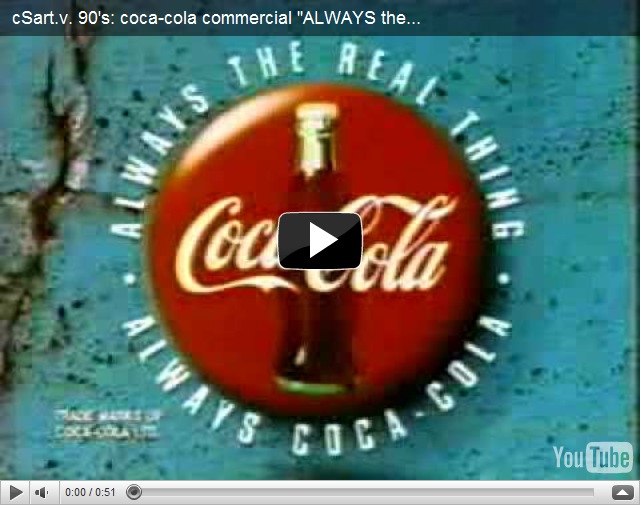 What is interesting though, is obviously I was not the only one wishing for a return to the inflatable ball, becasue here is the most recent Coke advert. The influence from 1979 is pretty clear: 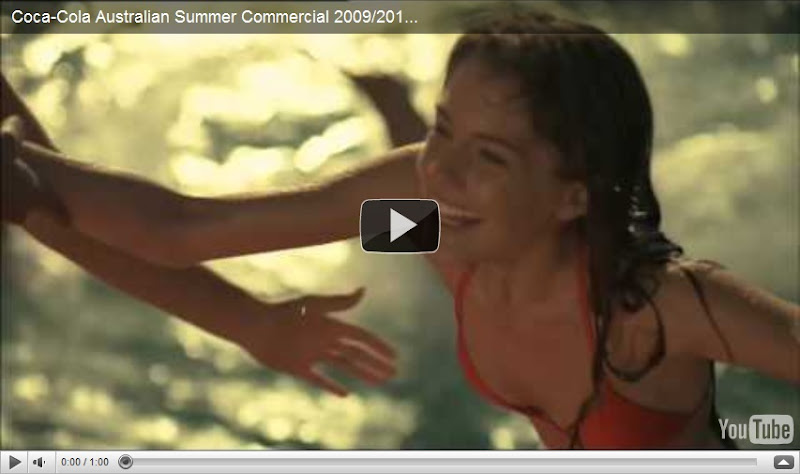 I couldn’t end without however showing the greatest soft drink advert of all time (no, not the Elle Macpherson Tab one), I’m talking the Mellow Yellow advert. More unintentional hilarity  is present here than any advert should rightly have. They certainly don’t make ‘em like they used to: 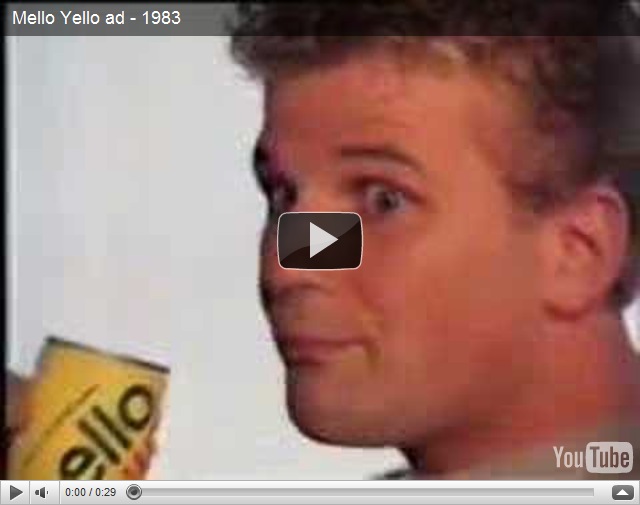 The American version just lacks a certain something, can’t quite put my finger on it though… 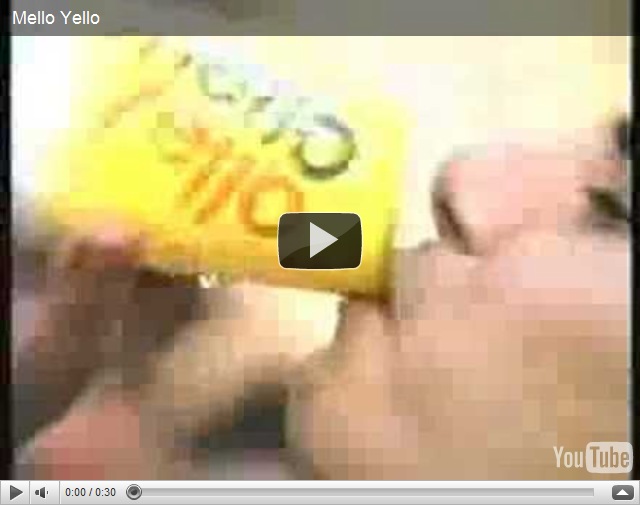 Have a good weekend.

I'm so glad I'm not the only one who doesn't care for Sounds of Then. It's not that I don't like hearing songs about Australia, I just don't think it's particularly good.

Well, I love the This Is Australia song, I love the Coke ads and I love Coke as well (although I'm restricted to Diet Coke thesedays), I really enjoyed seeing these adverts again. Next you;ll be remembering Tresca!

Got off the Coke and am now onto the hard stuff: Orange Mother.

Only for the mature drinker.

I had managed to live in total ignorance of the Sounds of Then Coke ad. Until now. I do like the song, and that rather spoiled it.

And that Mellow Yellow ad brings back my childhood - I remember Alex on TV when I was a kid.

The best ads I remember are the 90s Irn Bru ads, beats Coke ads hands down! It's a Scottish product, and we don't get it here (thankfully), but the ads were great. The drink tastes like anti-freeze and is the colour of the Forth Bridge, but the Scots seems to be addicted to it.

this was a hoot. You know I think the 90s one works for me because it's the first one that doesn't say I have to be any particular kind of person or image to like coke. You can put our own image in there - if you want to.

I think there is a pattern here, it occurs to me that just about every "teen flick" is a coke ad, or the other away around.

Having grown up in rural Australia, I sort of got why I didn't get invited to beach parties but I think you are on to something.

The blatantness of it all seems so obvious in retrospect.

I am now sipping on a large glass of ice cold coke, inspired by this post.

Interesting to see the development of the "Always CokeCola" concept to go back to summer...this ad's lyrics, though always struck me as being less redolent of Australia, rather more of a US differentiation of winter (school) and summer (fun time coke). Consider this example (US? EU?) where I think the lyrics and visuals are more effective. It is also relatively unusual for a coke ad for the amount of time where the product is actually being consumed! The high point must be those ads, such as you have embedded, that dont show the "product" at all, let alone it being consumed. But I guess, what really is the coke product than a state of mind!

But thanks for this topic (I am trying to persuade my architect to let me have a screen playing coke ads!).

Shows how much marketing and money is in soft drinks doesn't it.

I always likes the 88 Coke ad - as I was living in a cane growing area at the time (and it was the bi-centennial year).

... sold out so easily? Everyone has their price, you know. Except in the public service, of course.

Seeing that Mello Yello and hearing that jingle after 27 long years really made my day.

Man, going to the beach and swimming in your jeans, i remember those westies.
dylan

Brett Donald, my price is very cheap! But where's my commission for enticing Rationalist to have a Coke???

When you approach various corporate entities to form a partnership, you have every right to use my post as evidence for the market power of this blog.

"Grog's Gamut - brought to you by Coca Cola"

All of this reading and typing is making me thirsty.....

Please can we make sure that mens shorter than short boardies with piping aroung the edges never come back in fashion.
In the 1992 sky diving Coca Cola ad I thought I saw a young Tom Williams (the guy in the green t-shirt and the dopey expression).
Loved the Mellow Yellow ad but don't remember it at all.