Flick of the week: “Everybody gotta die some time, Red”. 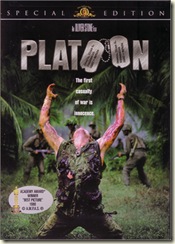 This week’s flick of the week takes us with Willem Dafoe from his small role as Captain John Darius in Inside Man, to his breakout role as Sergeant Elias in Oliver Stone’s seminal Vietnam War film, Platoon.

Dafoe has certainly made a career of turning up in some very good films. He is a bit of a go to guy when you need someone who is serious but also a little bit unhinged. The guy’s characters always seem to have a past. Oddly, his role of Elias runs somewhat counter to his current persona. Elias is “a crusader” to quote the other Sgt in the platoon – Sgt Barnes (played by Tom Berenger in the best thing he’s ever done). Were the film being cast today it is unlikely that Dafoe would be considered for Elias (ignoring the age issue). Defoe now has that nasty aspect that would have you expecting Elias to go on a killing spree at any moment rather than philosophising about war. Berenger meanwhile would not be cast because he has milked this role to death in all those God-awful Sniper films.

Would Charlie Sheen be cast in the lead role? Er well probably not. Were they to go back in time, more likely the role would now go to Johnny Depp who has a bit part – though Sheen is well cast. 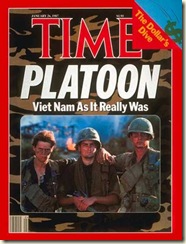 It’s easy to forget the impact Platoon had when it came out. After The Deer Hunter, with its odd depictions of Russian Roulette, and Apocalypse Now with its madness that makes it utterly compelling, but hardly realistic, cinema was ready for a film to treat the Vietnam War with some realism. When it was released it packed a punch that had the media (especially in America) talking about how watching it was an almost cathartic process for Vietnam Vets. It certainly pulled no punches and there are many scenes that leave you gasping. I was always a bit bemused when Saving Private Ryan came out, and how reviewers made a big deal about how it depicted war, as though Platoon (and many other excellent war films) had never been made.

For Aussie Vietnam Vets the film likely had an impact as well – but it certainly does not depict their experience – The Odd Angry Shot did that job. Aussie soldiers in Vietnam for example were not dope smokers – and certainly not while on patrol. (By the way, my old colleague from James Cook Uni, Janine Hiddlestone has an excellent study on the impact on the stereotype of the American experience in the Vietnam War on Australian veterans). But just having the war so discussed and visible was a huge step – and as the film was only released in Australia in 1987 it coincided somewhat with the veterans’ welcome home parade held in Sydney in 1987 October of that year.

The film of course was written and directed by that mad genius of the baby boomer era, Oliver Stone. For a short while there he was the pre-eminent director in Hollywood from his amazing Salvador, through Platoon, Wall Street, Born on the Fourth of July, the indulgent The Doors and then the magnificent JFK (regardless of if you believe the theories, Stone directed the hell out of that film). Then things started to get a bit fuzzy – Heaven and Hell was, well I’ve watched it only once, and don’t really want to go back, and Natural Born Killers has plenty of fans, but for mine it was a film before its time, and I don’t think that time will ever come.

There are some great and very intense scenes in the film – the massacre of the village, Elias’s death (a take that was so perfectly done  by Dafoe they used it even though the fake blood packets didn’t fire as planned – you see him react as though shot, but no blood is seen), and the final battle. It deservedly won Best Picture – though it wasn't a strong year – hell Crocodile Dundee got nominated for Best Screenplay.

The film has always resonated pretty strongly for me. When I first saw it I saw it twice in a week and it was one of those films which I quickly came to know all the dialogue. In 1989 when I was in Japan I met a group of other exchange students – some of whom were from Canada. The night prior to our meeting Platoon had actually been on TV. As we were walking around the temples that we were sightseeing that day I mentioned that I had watched it and one of the Canadians said he had as well, and suddenly we were quoting the entire script back to each other.

When such a thing happens you just know you have met a friend for life, and so it has turned out to be. (You also know everyone else in the group is looking at both of you as though you are rather deranged.)

1989, was an odd time – the cold war ended and the threat of world war seemed gone for good. We were just old enough to feel some sort of connection with the characters in the film, but knew as well that neither of us were ever going to have to worry about being drafted to go kill someone for some unknown reason. It was a year in which so much happened that for some it seemed nothing could be the same again – Francis Fukuyama for example would write an essay called “The End of History”

Our generation – that terribly named Generation X – to a very large extent grew up without war. The Gen X war films are Buffalo Soldiers – a film about bored soldiers with no war to fight, or Jarhead – about Desert Storm that was over so quickly the snipers didn't even get to shoot. This is not say no soldiers died in Desert Storm, but overwhelmingly the vision for people of that war was just of a smart missile going through a door. Infantry? Grunts? The long drawn out years like Vietnam? The protests? That would not happen then; its time would come again though.

By September 2001 my generation was at least in the mid-twenties; many over thirty, and joining to go fight was neither realistic, nor a concern from most. Of course my generation had no say over any of the timing of all of this, though I like to think that we were so obsessed by the baby boomer period – so determined to repudiate all of it we just wouldn’t have stood for the whole let’s go off and fight a long drawn out war game. We knew in our rebellious teenage years that we were pretty well rebelling against not having much to rebel about (try going to uni and the best you can do is go for a march against HECS and see how fired up you can get). In the end you knew it was nothing of any real consequence – and given the general apathetic nature of the generation, a war just seemed to smack of effort that was well beyond us.

Perhaps I just think too much about this film. But whenever I watch it and see the opening title card with the passage from Ecclesiastes of “Rejoice O young man in thy youth...”, I think of my youth in 1989 when quoting dialogue from a war film was fun and I knew I’d never have to worry about going into battle. 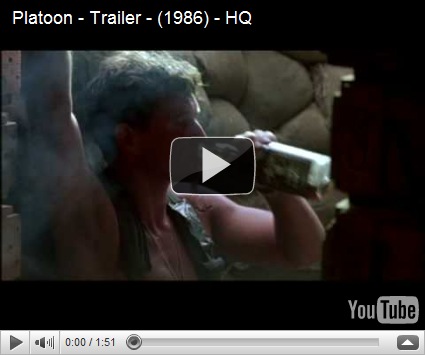 thanks for coming back Grog.

I'm not sure if you are a basketball fan, but there is a simply amazing ESPN doco called Once Brothers which I just saw and I think anyone who had even a passing interest in all the things you seem to like would enjoy it.

Anyway, keep up the amazing blogging, it's such a pleasure to read.

Platoon is one of my all time favorite films, definately in my top 5 and for a long time (and maybe even now) it was number one. As a Gen X as well, although a couple of years younger than you I guess, I don't think I've ever thought about the whole apathy thing in a lot of detail (oh the irony :-P ) but now that you've promted the thought process I think you've pretty much nailed us. I remember being at school when the Gulf War was on and thinking about it as a sheer numbers and politics game rather than anything 'real'. Even our opposition to Iraq (and I think there where a lot of Gen X's in the more vocal opposition) was more out of a sense of that somehow justice wasn't being done and due process wasn't being followed (this is not to say we thought Saddam was a sait but rather he was no less a sauint than many other dictators running around at the time) rather than anything related to the impacts on th soldiers or the people of Iraq. This detached opposition quickly turned to dishust at what we had done and again, that sence of justice requiring us to fix a wrong was my driving emotional response to the whole thing - I still don't think I have any grasp of the human loss and misery that we have inflicted upon the Iraqi people and the men and women that weer sent there to fight and somehow peace that we were party to (at least in part) destroying. I suspect Gen Y's here in Oz probably look upon Iraq and Afghanistan in much the same way we did to the First Gulf War - as detached observers. I also suspect this is is somewhat differnet to Gen Ys in the US who are seeming their friends go over and come back maimed, not at all or emotionally scarred by the experience - for them the war must seem so much more real. I hope this the experience of the US Gen Ys is enough to prevent them blindly walking into more wars in the future because us Gen X's are bloody hopeless at being passionate about anything we have no experience in.

When it comes to our turn to make those important decisions about war, we don't have the first hand experience to make us really pause when committing others to a fight we won't personally be in; I hope those that do have the courage to stand up and give our generation that pause, even if that pause is for entirely selfish reasons.

Bugger, look what you've done Grog - you've gone and made me go all philosophical!! - Welcome back ... I think ;-)

I'm a gen Xer too, and I used to roll my eyes when yet another Vietnam war film was done, so I never went to see any of them, even though ALL the boys raved about Platoon. I wanted more Judd Nelson (who? I hear everyone ask) and Molly Ringwald....

But, I watched Once Upon a Time in the West on your recommendation, and it went into my top 5 westerns, so I'll give this one a whirl now.

Thanks for the discourse.

Hi Grog, while I liked Platoon, I *really* liked Brief encounter. But alas, the link to it in your fine list of flicks of the week is borked. Help!
P.S. Great to see you back on the tubes.