Flick of the Week: “My bathmat means more to me than you!”

This week’s Flick of the Week takes us with Kevin Spacey in his bit-part role as a Wall Street sleazebag in Working Girl to that of uber Hollywood studio exec, Buddy Ackerman in quite possibly the blackest Hollywood satire ever – George Huang’s Swimming with Sharks.

Wining the Oscar for Best Actor for his work in American Beauty killed Kevin Spacey’s career. The guy was easily one of the top 3-4 actors working in film in the 90s; since his win in 1999, he has become a waste of celluloid. Here are some of his roles prior to winning the Oscar:

Gotta say there’s not a lot I’d watch even for a bet. The Men Who Star at Goats finally has him getting back to where he should be – a character actor! Not a lot of character actors make the leap to lead. Dustin Hoffman did it, Jack Lemmon (Spacey’s idol) sort of did, but he generally worked best with someone else – eg Walthar Mathau. Mostly character actors may get lucky and score a couple good leadish roles, but by and large stay in the support roles – and by and large they kick arse in those roles.

Perhaps the main problem has been that Spacey just has not had good scripts to work with – unlike when he played Buddy Ackerman in Swimming with Sharks.

Swimming with Shakes is an utterly pitch black look at what it takes to succeed in Hollywood. Ackerman is the worst boss ever put on film. He constantly abuses his assistant, Guy (played by Frank Whaley), pushing him well past breaking point, and in the denouement pressures Guy to make a truly horrific choice – one which will decide whether or not he becomes a Hollywood player. The only other satire of Hollywood that could compete for the title of blackest ever is Nathaniel West’s The Day of the Locust, which ends with the main female character going from wannabe starlet to whore; another character (a guy called Homer Simpson) mercilessly beating a child that causes a riot at a Hollywood premiere; and the main protagonist going insane and screaming as he is carted away in an ambulance.

Swimming with Sharks doesn’t have anyone going insane, rather the ending suggests you would be insane (perhaps criminally so) to ever want to be involved with these people or the industry. As a character says at one point:

“This is not a business, this is show business. Punching below the belt is not only all right, it's rewarded.”

Spacey is magnificent in the role of Buddy – suggested to have been modelled on either Hollywood producer Joel Silver or Scott Rudin. That no one is quite sure who it is modelled on gives an indication that abusive bastards are not exactly in short supply in Hollywood.

Frank Whaley does his level best to hold ground with Spacey, but his role is that of the bland everyman and he is totally dominated both in the script and on the screen by Spacey. The film also gave Beniccio del Torro a small role (both he and Spacy would be reunited a year later in The Usual Suspects).

Weirdly this is the the first film of writer-director George Huang, and it is also his high point. After writing such a smart script, and obviously being so aware of how Hollywood ticks, it is odd that he really has gone on to do bugger all. It’s a pity: anyone who can come up with the line, “You are nothing! If you were in my toilet I wouldn't bother flushing it” surely had another film script in him!

Watching Swimming with Sharks is an interesting experience – it is so well done, but dominated as it is by such a repulsive character and so dark is its message that it’s not exactly a date movie. Its ending is as bleak as another film in which Spacey played a supporting role – Glengarry Glen Ross. But if you ever have any ambitions about getting into the movie business, and think perhaps you’d like to have a go at becoming a success in Hollywood, buy this DVD (it generally can be found four about $6 in JB Hi Fi), strap yourself in for some Buddy Ackerman love and remember “life... is not a movie. Everyone lies. Good guys lose. And love... does not conquer all”.

For some reason the clips on YouTube are unable to be embedded, but check out this one to get a taste. The trailer also sets up the film very well: 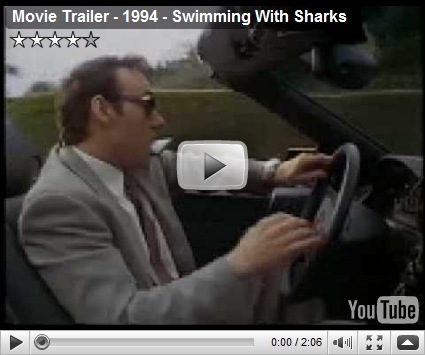 Kevin Spacey is awesome in anything, even in a mediocre flick like 'The Negotiator'