This week’s Flick of the Week takes us with Bill Paxton, from his role as astronaut Fred Haise in Apollo 13, to that of Marine Pvt Hudson in James Cameron’s brilliant sci-fi war film – Aliens. 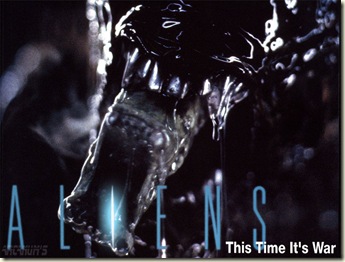 Aliens may not be a perfect film, but I have to say I can’t find any faults in it. It is one of the best sci-fi films of all time – and also one of the best war films as well. Yes, a war film, because take away the special effects, the space ships, the android, and what you have is a war film in the tradition of Zulu – a small band of marines, defending an outpost against wave after ferocious wave of attacks from the enemy. What gets them through is their discipline, strategy and the self sacrifice of members of the unit.

It’s why it doesn’t matter that the film is 24 years old – it hasn’t dated a whit (I’ll make a bet you won’t say the same about Avatar in 24 years… sure effects a re wonderful things, but story is eternal).

The film is also one of the very few sequels that is better than the first film. Sure Ridley Scott’s Alien has a great atmosphere and some brilliant scares, but this takes it to a whole new level – and has a much better group of supporting characters to Sigourney Weaver’s lead Ripley. It has Michael Biehn (who was Cameron’s go to guy in the 1980s – he was in Terminator and The Abyss) as Corporal Hicks who has to take over command, and he does so in the best tradition of those placed in similar positions in war films. The Sergeant of the platoon Sgt. Alpone – is also the perfect Sergeant; his lines are a direct descendent from those of Colour-Sergeant  Bourne at Rorke’s Drift:

All right, sweethearts, what are you waiting for? Breakfast in bed? Another glorious day in the Corps! A day in the Marine Corps is like a day on the farm. Every meal's a banquet! Every paycheck a fortune! Every formation a parade! I LOVE the Corps!

The Lieutenant in command of the platoon is a hapless newbie who after looking completely without use, comes through to show bravery when it most counts. There’s Paul Reiser in a bizarre role for those who only know him as Paul from Mad About You as the slimy corporate exec Bourke. There’s also Bill Paxton as Hudson – quite possibly the best cowardly marine in film history – a big talker when at base, but when the bugs count out to hunt, he’s the first to lose it, and finally Pvt Vasguez, the hard talking female grunt, who has the great comeback to Hudson:

Hudson: Hey Vasquez, have you ever been mistaken for a man?
Vasquez: No. Have you?

In fact the film is so full of great lines that you wonder what the hell happened to Cameron’s ability to write a script. 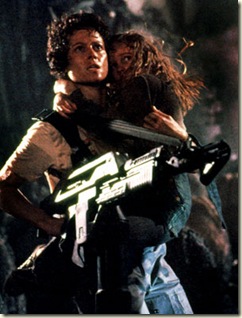 But perhaps the main reason the film holds up so well after all these years is the excellent performance by Sigourney Weaver as Ripley. She is at turns fragile, hard edged, caring, and brutal. It’s a pity she was enticed back to do a couple more rather less wonderful sequels.

I first saw the film in the cinema as a 14 year old, and it was probably the first “scary movie” I had ever enjoyed. I think I enjoyed it because, a) it didn't involve Freddie Kruger or a script by Stephen King, so it wasn’t really horror, and because b) I recognised the war film conventions and thus I felt comfortable with the world the film lived within.

But be in no doubt this is an edge of the seat thrill ride.

The aliens in this film are almost the perfect film villains. They have no redeeming features – they exist only to kill other beings so they can create more aliens to kills other beings so they can create more aliens… Your know that this is a complete take no prisoners scenario, and these things are coming to kill. Which means they can scare the willies out of you, but that it is also a great delight to see them get blown up. By the time the series got to Alien Resurrection we had them taking on a motherhood role and we were supposed to have some sort of feelings towards them. Bugger that, the only thing to do with these guys is to “take off and nuke the entire site from orbit. It's the only way to be sure”.

As with many films, this one was also released later in a Special Definitive edition, and like most such versions, it is not an improvement. Fortunately a DVD edition was released which has both versions on the one disc (fortunately as well I snapped it up at Big W for about $12). Apparently it’s not on Blu-Ray yet. When it does come out, I’m betting it’ll be a quick addition to any real film fan’s collection.

It is a great film all round, and one Cameron has yet to better. Best of all it is a great film to watch with the lights off, the sound up, and with a bunch of friends who know the dialogue, and so don’t mind you screaming out loud in a scared voice “game over man, game over!” 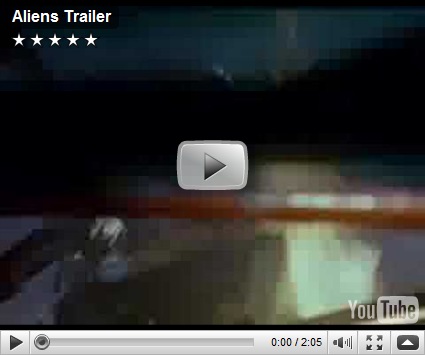