Newspoll: ALP 53-LNP 47: (or bound in shallows and miseries)

This morning we awoke to The Australian trumpeting the latest Newspoll with the headline: Rudd Hits a New Low. It is not until the 8th paragraph of the story that we find out the ALP had actually increased its lead from the previous Newspoll – going from 52-48 to 53-47. The story didn’t mention at all that both the ALP and Liberal Party primary votes had dropped 1%.

Now sure, it was not a great poll for Rudd. His net satisfaction rating is dropping – it is now at 10 (50% satisfied; 40% dissatisfied), and Abbott’s net satisfaction rating did hit a new high – 7 (44% satisfied; 37% dissatisfied). So we are at a point where more people are dissatisfied with Rudd than with Abbott. But on the preferred PM rating, it is still Rudd by the length of the straight – 55% to 27%. (And note, at the same time in 2007, the opposition leader, Rudd led Howard 47% to 37%! )

The poll also contained some questions on climate change. Only 73% of voters believe in climate change now compared with 84% last July. This is not too surprising given the fervour with which climate change deniers have been in the last 9 months; also given we now have a climate change denier as leader of the opposition, you will naturally get some wavering Liberals to believe it is now ok to think climate change is bunkum. And given Abbott has been doing his best to scare people about the ETS, and to make people think it is too confusing to bother with, it is also unsurprising that support for the ETS has dropped from 72% to 57% (interestingly 42% of Liberal Supporters are still in favour of an ETS). The loss of support in the ETS reflects that great quote by Upton Sinclair: “It is difficult to get a man to understand something, when his salary depends upon his not understanding it."

And while those points were interesting, the question I found more worthy of note, was the that of who would make a better PM: Julia Gillard or Tony Abbott. The result? Gillard led 49% to 38%. The uncommitted was only 13% compared to 11% in the Rudd versus Abbott question. In other words, there are two people in the ALP whom people prefer as PM to Abbott. This is not a good sign for Abbott – especially as Gillard is certainly less friendly to the Liberal “base”; she is not actually a leader (and thus doesn’t have the incumbent advantage Rudd does); and there are not many undecided on the issue either.

It’s not surprising Rudd can beat Abbott as better PM, but for Abbott not to be able even to beat Gillard is pretty good evidence that there’s not a lot higher he can go. I’m not sure if anyone has become PM when they are (at best) the third most preferred PM in the country; somehow I doubt it has ever happened.

So sure this is a new low for Rudd, but you have to wonder about the ability of Abbott to lead the Liberals to any great peaks.

Such doubts are reinforced by today’s kerfuffle over WorkChoices. Here’s Abbott on penalty rates:

When you think of the long term impact of Labor's new system and the re-emphasis on penalty rates, the weekend as we have known it will no longer exist," he told the Queensland Chamber of Commerce and Industry on Friday. "That's the risk because there will be nothing open after midday on Saturday."

Mr Abbott's deputy Julie Bishop yesterday underlined the new theme of the Opposition's employment policy. "The fact is that there are workers now who are suffering under the new awards system. Because it's bringing back penalty rates on weekends, and inflexible work conditions," Ms Bishop said.

This required Joe Hockey, who was giving a speech at the National Press Club to say:

“We will not be legislating to remove penalty rates,"

Which is not quite the same as legislating to allow penalty rates to go (no one is suggesting the Liberal will ban penalty rates).

Anyone who thinks WorkChoices won’t get a huge run in this year’s election is kidding themselves. It took the ALP a long time to kick the “higher interest rates” tag – they paid dearly for it in 2004 (some 14 years after the high interest rates under Keating); so don’t for a second think the ALP won’t keep going back to the WorkChoices well – especially when Abbott so dearly wants to give them assistance.

Hockey’s actual speech was the usual sub-par effort he always gives – pointedly disconnected with reality and using nice phrases like “crowding out” as though he actually understands the term. Unfortunately for Joe his line about the stimulus putting upward pressure on interest rates is not born out by anything the RBA says – certainly not the minutes of this months meeting which were released today. Here’s a couple lines:

Year-ended underlying inflation was expected to decline further through 2010 to around or just below 2½ per cent, reflecting the earlier slowing in demand and wages and the appreciation of the exchange rate through 2009. Inflation was expected to pick up a little thereafter, to around 2¾ per cent by the end of the forecast period, as the expansion continued and the effects of the appreciation faded.

Yep  underlying inflation is expected to decline. So much for upward pressure on interest rates. Fiscal spending doesn't actually directly force up interest rates; what it can do is lead to an increase in inflation, and it is that which leads to increases in interest rates as the RBA tries to keep inflation down. Nothing in the minutes suggested there was this pressure.

The problem with Hockey’s belief that Australia must pay off its debt otherwise interest rates will go up is that it is (to quote Treasury Secretary, Ken Henry) “a gross oversimplification”. Here was Henry last week in Senate Estimate fielding the very question from Barnaby Joyce:

Senator JOYCE—Is it a fair statement that, if we keep borrowing money and our debt keeps getting larger, we would be putting upward pressure on interest rates?

Dr Henry—No disrespect, Senator, but that is a gross oversimplification of economic understanding of these matters. To illustrate, you will recall that during the early years of this decade, as debt was being repaid, interest rates were steadily climbing. So I think we should be careful not to rush into simplistic relationships between levels of debt and interest rates. In Australia since the early to mid-1990s—it is not necessarily true in other countries—it has been the case that, as government debt has been repaid, interest rates have increased, not fallen. That is not altogether surprising because governments have an enhanced ability to repay debt as their fiscal positions improve, which is fairly obvious, and their fiscal circumstances improve as the economy strengthens, which is also fairly obvious. As the economy strengthens, other things being equal, there is increasing upward pressure on prices and monetary policy responds to that. So it is not terribly surprising that we should see, as you would see if you were to have a look at the data, that since the early to mid-1990s the repayment of debt has actually been associated with increasing interest rates. 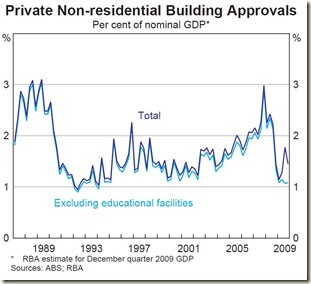 But Joe just bounds on in and makes that simplistic assumption.

It also ignore the crucial data on building approvals. Look at the graph on the right – notice the BIG divergence between total approvals and non-educational facilities approvals? Yep that is the school building stimulus at work. Take that away and do you seriously think unemployment would have gone down to 5.3%?

Of course not, because you’re not stupid. But that caveat doesn't seem to apply to Hockey – he thinks the Government is crowding out the private sector – ie we’re at full capacity and the Government is using up all the labour and materials and credit on hand.

I know, shake you head and move on… (it’s for the best)

And so how does Joe propose to reduce this evil debt? Does he think we need to slash middle class welfare, look for efficiencies or increase taxes? Of course not – he is a Liberal – a John Howard Liberal, and so he proposes to do what John Howard did best – sell something.

Hockey’s big economic measure is to sell Medibank Private. Hockey doesn’t say if selling Medibank Private will be better for consumers, will make the Private Health industry more efficient, or lower insurance premiums. Hell no! Why would you say anything like that – he is just selling it because it is there to sell, and it means when asked about any costing for anything, he can now just say – oh we’ll pay for it out of the sale of Medibank Private… except, he’s selling it to pay off debt.. so whoops he’s still short quite a few billion in savings measures given their “direct action” climate change policy. Hmmm might need to sell something else…

Hockey might also do well to cast his eyes to Queensland and ask how popular Anna Bligh’s privatisation plans have been.  It also gives the ALP a very easy response – first the Libs will sell off Medibank Private, then they’ll try to off load Australia Post... what next? ABC?…

The big problem with Hockey’s plan is that he is not doing it for any efficiency reasons (as is the case with states selling off public electricity). Heck you could even make the efficiency argument for the selling of Telstra, but here Joe is just selling it because he wants to pay off debt – a debt that the RBA is saying is not putting any pressure on interest rates or inflation. And given the Liberal Party’s form it would be accompanied by more assistance to the Private Health Insurance industry.

Joe would be a great financial advisor. He’d look at your mortgage that you are paying off comfortably, and he’d say… hmm that total debt is too high, I think you should sell your car. Have trouble getting around? Well with all the money from your car sale, you can now afford to rent a taxi.

53-47 is a low point for Rudd? With Abbott, Hockey and Joyce continuing to open their mouths, for the Liberal Party it could be a high point.

Grogs, can you get a gig as guest columnist at The Australian?

Come now Grog, Joe doesn't actually believe all that guff, he's just trying to woo the stupid vote. Fair enough, it's a big percentage of the voting public. (We all know God loves stupid people cos he made so many of them.) Let's just hope they aren't that stupid.