On the QT: Lock the Doors (or they’ll all leave early)

Ask any teacher, and they’ll tell you that teaching a class after lunch on Friday’s is never a period of great productivity, so it is with Question Time on Thursdays before a week off. 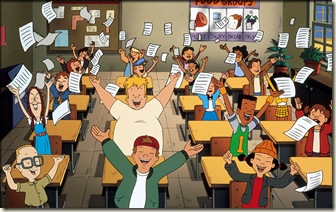 The House was a bit of a rabble today – not in terms of massive amounts of abuse, but just in the general demeanour. Almost all speakers had to put up with a high level of hubbub. Andrew Laming, who earlier in the day had revealed himself to be a complete fool by telling journalists he thought Kevin Rudd had major psychological issues (not that he “wanted to trivialise the issue”), got himself named by the Speaker during a response by Nicola Roxon. Unfortunately such was the level of noise in the chamber I couldn’t pick up what he said, and thus when the call went out by Harry Jenkins to lock the doors, I was at a loss as to why he was getting the boot. When he left, no doubt a few MPs looked on with envy.

The main thrust, if you can call it that, of the opposition, was to again blame Rudd for the job losses of a scheme the Liberals didn’t even think would create any jobs. Yes it was hypocritical, but that is the Liberal Party’s main calling card at the moment. For example, when Rudd pointed out that the number of house fires caused by insulations had actually decreased since the introduction of the Government's scheme (thank you Possum), Joe Hockey (remember him – he’s apparently the Shadow Treasurer) tweeted that Rudd was disgracefully treating 4 deaths “as a rounding error”. He then followed this up by tweeting: “I have never seen such an insensitive response as KR today on batts in 14 years in Parl”. Apparently though he has no problem with the leader of his party using the four deaths for political point scoring in interview after interview.

Hockey hasn’t had any credibility for a long time now, and given that his contribution in Parliament is now limited to tweeting, I think we can comfortably ignore anything he has to say on any subject. That this guy was recently thought to be the one most likely to lead the Liberal Party is astonishing. Rarely has any MP ever been so massively over-rated.

Abbott’s blaming of Rudd and Garrett for these four deaths is quite extraordinary given the coronial inquests into their deaths haven’t even been held. One of the four apparently died of heat exhaustion – I’d like Tony Abbott (or his second banana Hockey) to explain how Garrett could be at all responsible for that? There was no time limit on getting the insulation installed – it wasn't as though you need to get the batts installed in under 2 hours or the rebate was void. Dying from heat exhaustion is all about OH&S, and everyone should be waiting until the coroner makes a ruling on who was to blame (if anyone was – it may for example have been due to a pre-existing and undiagnosed medical condition). Nowhere in the scheme were companies asked to breach state OH&S rules – in fact new national guidelines were brought in.

Apparently the Liberal Party now stands for people not taking responsibility for their own businesses.

Here’s Heather Ridout, from the Australian Industry Group last night on Lateline putting some sense back into the debate:

HEATHER RIDOUT: Well, look, I think one of the things that we are very concerned about, we have a very high commitment to safety as employers.
I mean, I find it really very distressing that employers have played fast and loose with the lives of employees, apparently through this scheme. We take a very dim view of it. And that worries me.

I mean, it's all very well to shift the blame to politicians, but as an employer you have a duty of care to your employees and I feel that very, very strongly. And it's a major ethic and value in our organisation, among our membership.

Exactly right. What Governments should do is put in place adequate health and safety regulations. The Government did that in this case – they actually went further than the previous Australian Standards for insulation!

But still. Sigh, Abbott and a plethora of back benchers went on with their “tactics”. No one was listening though. Garrett is safe, Rudd is getting his footwork back, and Abbott is continuing his habit of being all talk, no thought.

This morning the big story was that of three faked or forged Australian passports being used in an alleged assassination of a Hamas leader in Dubai.

Tony Abbott was asked about this issue this morning. Here’s his response:

Problem is Tony, as Stephen Smith pointed out during Question Time, the three passports were all issued in 2003 – which if my memory serves me correctly was when John Howard was still very much Prime Minister.

What an utter fool. Together with the issue of the doctors’ golf balls, that makes it two times in one week that Abbott has tried to blame the Rudd Government for things that occurred during the Howard years.

One day the media will wake up to just how loose Abbott is with facts and accuracy.

For now the ALP will wait, and no doubt keep adding to its already massive “Dumb things Abbott has said” file.

Grog,
I'd propose that Dr Andrew Laming was calling Nicola Roxon 'Bipolar Nicola', a common, low-rent epithet used by the conservatives when talking about Minister Roxon.
No stoop is too low for them to bend to, it seems.