Flick of the Week: “Nobody can stab a corpse and not know it.”

This week’s Flick of the Week takes us with director Robert Altmann from his acerbic Hollywood satire, The Player, to his take on the British whodunnit mystery, Gosford Park.

Gosford Park concerns a shooting party held at the eponymous estate in England. One night the head of the estate William McCordle (Michael Gambon) is murdered. Whodunnit? Attending the party are many of his in-laws and relatives, most of whom don’t have much care for him apart from his money, and also there are the multitude of servants. Did the butler do it?

Robert Altman has made a number of wonderful, challenging films – such as Short Cuts and Nashville and M.A.S.H., but Gosford Park is by far my most favourite of all his films. It is the only one of his films that I quite often on a lazy Sunday night will put on DVD and just enjoy the performances. Because while Altman’s direction in the film is excellent – and uniquely  his style with overlapping dialogue, it is the performances by the cream of British thespians that has me coming back again and again.

Just look at the cast: Maggie Smith as Constance Trentham, elderly and dependant on McCordle for his money; Helen Mirren as the housekeeper (both her and Smith were nominated for best supporting Actress at the Oscars that year); Kristen Scott Thomas as McCordle’s wife, the pure snob, Syliva; Jeremy Northam as the actor Ivor Novello (a real person), who is there with Hollywood producer Morris Weismann (he plans on making a Charlie Chan film set in London); Clive Owen as the servant Robert Parks; Derek Jacobi as the butler; Emilie Watson as the headstrong servant girl Elsie; and Kelly Macdonald as Trentham’s servant, Mary Maceachran. Throw in Richard E Grant, Tom Hollander, Alan Bates, Stephen Fry and Eileen Atkins and you’d have to say if you were a British actor and you weren’t in this film you should have been giving your agent a call. This film, Love Actually and the Harry Potter films pretty well includes the entire cohort of British actors (off hand I can only think of Judi Dench and Kate Winslet who aren't in any of them).

The film has often been described as a rich dessert rather than the usual main courses that Altman serves up. And yes there is not much underlying this film. No big statements about society – because it is set in 1932 it is hardly relevant in the way that was Jean Renoir’s great 1939 shooting party film, La regle de jue (The Rules of the Game) on which Gosford Park most certainly gives a nod.

But films do not always need to tell a message; sometimes you just want to see something done well. And this film does what it does very well. The mystery of who killed McCordle is in many ways irrelevant, the point of the film is to watch the interaction between the upstairs and downstairs of Gosford Park. To see how important the servants are in the lives of the the lords and ladies living in utter boredom.

The film was Clive Owen’s first role in a film to get major notice in America. He had been in the small “Croupier”, but this was big time. His performance is truly star making. The one thing that stars are able to do more than any other actors is that when they are on the screen you can’t help but notice them. And Owen has that ability in spades. Poor Ryan Philippe is fairly well blown off the screen in the scene in which they share. 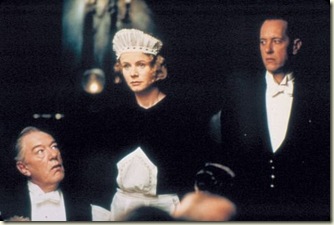 For me though the best performances are by Kelly Macdonald and Emily Watson  as the two serving girls Mary and Elsie. Mary is new to the game, whereas Elsie is cynical and wiser (though in some ways not). Macdonald would go on from this to star in the brilliant BBC mini-series State of Play, and I would love to see her in much more – she is fantastic. Watson as well is an actress who is really in the top echelon. She has never cracked it in the way that Kate Winslet has, or even perhaps Emma Thompson. But she never puts in a bad performance – a bit like Australia’s Judy Davis, you figure she’ll never get the huge starring roles, but you should never miss anything she is in.

Below is the scene of the murder being carried out, but it also wonderfully displays the utter affected boredom by the party as they listen to Northam play the piano. One must never be seen to enjoy oneself! (I love Maggie Smith at the start of the clip imploring those at the table not to applaud for fear of encouraging him). 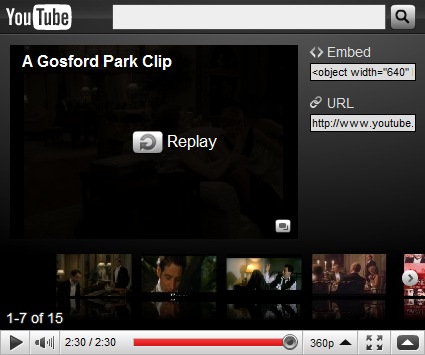 It’s a wonderful film – a film made for adults who like to watch great actors do their stuff, and which has an intelligent script that assumes the audience is intelligent.

My favourite quote involves a bit of small talk with Weissman about his film. Maggie Smith delivers the final line with such withering condescension that only the British upper class are truly capable of achieving:

I have to disagree with you about there being no big statements about society: the whole social position of the servants, especially thehousekeeper and cook and their history with their employer, the resultant baby and what happened to him - the secrets they've all lived with. This tells you an awful lot about the position of working class people - women especially - in the first quarter of the 20thC. And the whole film is about the class boundaries which were about to become riddled with holes and almost fall eventually, but they hadn't quite worked that out.