On the QT: A really bad attack

I always think the opposition starts to struggle when their questions in Question Time all come out of the same phrase book. Yeah they invariably will use the “Great big new tax” line, but today they went that step too far. Each question to Kevin Rudd on the RSPT was prefaced with quote from “real” mining executives/CEO, and then ended with the questioner asking Rudd when would he dump this “really bad tax”. 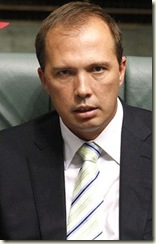 The problem with such a cookie-cutter approach is that it means Rudd “really” only needs one answer; and so it was today. He actually had a lot of fun in Question Time today. His first answer to Abbott showed him being quite buoyant as he reeled off the falls in share prices since May 4 of numerous mining companies in Brazil and Canada – all of which he delightfully informed the house were much worse than the 1.5% rise in BHP share since then (hello Peter Dutton). But Rudd then solemnly revealed that Dutton did make a mistake  – he should have invested in Rio Tino, which had increased by 5% since May 4.

And so it went on. The opposition would ask about the collapse of mining shares (because yeah that really is the pressing issue as we pay our bills each fortnight…) or about what some Minister for Mining in Chile or Canada had to say about the RSPT, and end with “when will he dump this really bad tax”.

When Bishop cited the Chilean Minister, Rudd made mention of a report in Bloomberg yesterday that Chile was:

seeking to introduce an optional sliding tax rate on profit of between 4 percent and 9 percent.

Joe Hockey stood up next and pointed out to Rudd that this was being brought in to help pay for the Chilean earthquake and was temporary. Joe said it was due to end in 2012.

This is true, but Rudd powered on unperturbed. His point was that around the world Governments are looking at how they tax mining, and it is all heading towards taxing profits. Rudd should have also cited what is happening in India, where according to the Wall Street Journal

India's Mines Ministry has proposed a windfall tax on non-fuel minerals such as iron ore to claim part of what the government considers high profits earned by the mining sector.

"Our proposal is to levy a windfall tax on domestic sales as well as exports of minerals when their (prices) are substantially higher than the cost of production," Mines Minister B.K. Handique said in an interview.

On the lines of a similar proposal in Australia, the new tax is also meant to raise additional revenue for the government.

But what is Tony Abbott’s view on how we should tax miners? Today he said, the current model was fine because:

Yes, the better it does, the more it pays. Geez, can you believe the level of stupidity displayed by that statement? This from the guy who wants to run this country.

Imagine this scenario: your father was a poor man, and he bequeathed you in his will 1000 marbles; these are the only marbles you will ever have, once they are gone, that’s it there are no more to be found. Lucky for you people want marbles. Unluckily for you they are really the only thing of value you have to sell, so you need to make sure you get a fair deal (because remember, once they’re gone, that’s it, so you better make enough money out of them to survive on for a few years after they’re all gone).

Now I come along and say I’ll buy a marble off of you for $3, because I know a guy who will buy them for $4. You think, well you only have a 1000, but ok, that’s sounds fair – after all even though these marbles are scarce, I am only making $1 a marble, and you’re making $3 – which is only fair as they are yours (you own the marbles – I just take them from you and sell them).

According to Tony Abbott that’s fair – and in fact thinks you are better off because you are getting more money each week – so much that your savings each week are more than you expenses (you’re in surplus in fact).

But why am I suddenly wanting a marble a day? Well it is because instead of being able to sell them for $4 a marble I am now selling them for $10 a marble.

You see when we started I made 33% on the deal, now I am making 233%. And best of all, my costs haven’t increased because I still only pay $3 a marble, and the manner in which I sell them to my buyer has actually gotten cheaper – I employ less people – it’s all remote operated. So you can bet I really want all the marbles I can get!

Of course they didn’t, and yet they are now suggesting that bringing in the RSPT on existing projects is “retrospective” because it is placing a tax on an operation that did not anticipate such a tax. Well boo hoo – unless you can show me a document where a mine that began 20 years ago was only begun because the company expected commodity prices to soar by 150%, they can start paying your fair share. Because you see, just like the 1000 marbles we’ll one day run out of iron ore and gold and nickel and etc. And if we’ve kept charging the sucker price of $3 a marble, our future selves will look back and want to slap us around the head and say what the hell were you thinking??!!”

In our example let’s say the last 800 marbles were being able to be sold for $10. That means for those 800 marbles you got $2,400. I, however, who bought them off of you, made $5,600. Had the price stayed at $4 a marble I would have only made $800. So you can see I am a lot richer than I thought I was going to be when I first made the deal with you (hell I thought making $1 a marble was a good deal). I am really happy because I actually didn't do anything to make the price go up. It just did, and so through doing nothing different I suddenly began making a hell of a lot more money. When we made the first deal you got the most money: you got 75%, I got 25%. Now I get 70% and you, the owner of the marbles get 30%. Are you happy? If you are then you are either a fool or Tony Abbott (but I repeat myself).

The dumb way to solve the problem would be to increase the price of marbles, but this arbitrary and not linked to anything “real”, and may change whether or not I can be bothered buying so many marbles from you, and also I’ll just charge the people who buy marbles more for them to ensure I keep making a big profit (but this only works if people are prepared to pay what I charge – sometimes the price can fall, and then what would I do?). Far better to say – ok you’ll just take a share of my profit – (because after all, remember they are your marbles). And when you think about it, this is what happened at the start – you thought, hmm the marble is worth $4, you’ll keep $3 and I the seller gets $1 – you get the bigger stake because you own the damn rare things. I am just selling them.

A tax on profit just keeps the stake stable.

But no. Go with Tony’s view that the mining companies are paying “more” tax. Me, I’ll keep looking at the dwindling pile of marbles and think, gee why do I have this nagging feeling I’m being ripped off.

There were only two other highlights. First a Dorothy to Julia on a BER spend on a school in Darwin. You’ll be shocked. I know, to hear that The Australian reported the project was not value for money – comparing it unfavourably with a nearby McDonalds (why you would compare them I have no freaking idea). Well you may also be shocked to hear that Julia had actually been on the phone with the principal of the school and found that the article didn’t quite match up with reality. The quotes of joy and praise Julia related were long and effusive. It was quite humorous, especially as Rudd had earlier reminded the House of the day The Oz got the Rio Tinto “shelving” of projects so very wrong.

The second was Lindsay Tanner answering a Dorothy Dixer on the joys of pre-selection of candidates for the LNP in Queensland. Did the Opposite like this question? See for yourself:

Speaker ordered Mr Pyne to withdraw for 1 hour for interjecting after a warning had been given by the Chair, 3:35:08 PM. Mr Pyne left the Chamber at 3.36 p.m.

Speaker ordered Mr Billson to withdraw for 1 hour for interjecting after a warning had been given by the Chair, and he accordingly left the Chamber, 3:38 PM

It was a lot of points of order which did nothing but reveal to all that the Opposition is very, very tetchy about this issue. Basically the LNP in Queensland is a basket case. Sure the ALP is down in the polls in Queensland, but as long time residents of QLD know, when it comes to elections the LNP in QLD couldn’t organise a piss up in brewery even if someone wrote down detailed instructions of where the beer was, how to open the bottles (including idiot proof bottle opener) and how to give it to all the guests.

No wonder they don’t like questions on the issue.

And that ended the day. Only 16 questions, but tonight is the Mid-winter Ball, the one night of the year where Parliament House resembles a High School social, and there was hair to be done, etc etc so it was best to cut things short.

And the good thing is, since the amalgamation of the two parties the wets and the dries have been tearing each other apart, as shown by the Michael Johnston thing, the Rob Messenger and Aidan McLindon defection and the business with the Brisbane City Council.

But the best thing is, no matter which faction wins, the Nationals will just crush them, and take over fully, including things like QLD Federal Senate ticket.

If I were George Brandis, I'd be worried.

Grog, am I mistaken, or was company tax actually higher 20-30 years ago? If I am right, then the mining industry has also received a windfall from the govt on its company tax.

You can read about it
here

No one ever called these changes "retrospective"...

I thought so. So basically, if a mine started prior to 1986, it had a built-in assumption that its top tax rate was 49%, etc etc. Well, if it was a separate company, but they usually are, it seems to me.

BTW, is it just me, or does that pic of Dutton look like he's drooling from both sides of his mouth at the same time? At least that would show he was level headed.