On the QT: Seven more to go?

Today’s Question Time began with a condolence motion on the deaths of the two Australian sappers who were killed in action last week in Afghanistan. As is often the case, such moments brings out the best in the house.

In the last two years in such cases Rudd would make a pretty impassioned address to the house (and indeed he did this time) which would be countered by the Leader of the Opposition trying to outdo him in the impassioned stakes. Brendan Nelson would find sadness in every nook of his speech, and wring it for all it was worth; Malcolm Turnbull would invariably quote the Bible (King James Version) and would do his best Churchill meets Kennedy impression. Tony Abbott today however took a rather different tack. He was quite brief, didn’t get too emotional about it all, and sat down.

This isn’t criticism or praise of Abbott, just an observation that I don’t think he is at his best doing anything remotely statesmanlike (how’s that for a backhand compliment!). Given the way he spoke in parliament when the Indonesian President addressed the joint sitting, I was surprised he didn’t use the occasion to have a bit of a stab at Rudd. Perhaps he knows if he talks to for too long he will invariably flick into attack-dog-Tony mode, and so wisely kept it brief and sat down. 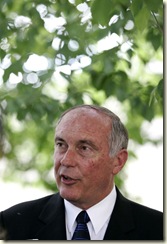 Question Time proper then began with Warren Truss asking the first question. Yep, Warren Truss. This is akin to opening your bowling with your third best, part-time medium pacer (though the Member for Dobell, Craig Thomson said it better on twitter when he remarked: “Never seen the 12th man open the bowling before. Until todays qt”).  His question was to Simon Crean on the RSPT and the reported lack of consultation in Cabinet of the tax and Crean’s statement last week that the government could have done the consultation with industry differently. Crean’s statement had been reported in The Oz as a serious effort to undermine Rudd, so no doubt the Libs thought attacking Crean would reveal splits in the Government.

They should think again.

Crean bounded to his feet and gleefully reported that it was the first question the opposition had asked him in three years! He then gave easily the best answer of the day – full of scorn and disdain for the Libs and full of praise for the RSPT. Was he consulted? “Of course I was consulted” he roared. At this point all the Libs on the front bench could yell was “when”, but Crean would have none of it. He put them in their place and argued effectively for the RSPT from the point of view of trade, and then sat down, no doubt confident that after that performance that that would be his first and last question in this parliament.

Next up Kelly O’Dwyer from Higgins got to ask her first question. She is tipped to be a star in some future Liberal Government, but it was not a good start for her. She tripped up over the last part of the question about the “gang of four” and pretty much sat down in embarrassment. During the answer given by Martin Ferguson (the opposition decided to try and see if there was any disunity in the Government by targeting ministers and not Rudd) when she stood up to make a point of order, one Government front bencher (I think it was Nicola Roxon) yelled “Oh, did you practice reading this one too?”.

Then Julia Gillard was asked a question by Michael Keenan on whether or not the Department of Employment had modelled the impact of the RSPT on jobs. Firstly this was a very dumb question to ask given last week’s announcement of a drop in unemployment of 0.2%, and secondly such modelling is done by the Treasury – the Department of Employment handles employment issues – such as industrial relations and employment programs; the Treasury does the macroeconomic modelling stuff.

Julia had no trouble at all with the question (for the reason just outlined), and when Joe Hockey, interjected with “we had it [the unemployment rate] at 4 percent”, she took him to task pointing out that there had been this thing called the Global Financial Crisis that had been in the news, and that he would do well “to catch up on that little piece of news”.

Then finally Abbott asked a question to Rudd. It was not worth the wait. He quoted various statements made by Rudd, Tanner and a couple non-entity back benchers (actually he verballed them, rather than a quoted) on how long the discussion process on the RSPT would take. The question could have been good, but he ended it with a tirade asking when would Rudd dump the tax. This is a dopey stance to take – rather like the opposition’s stance on the stimulus – totally against it, instead of being for it in broad terms but critical of specific aspects. The problem for Abbott is that everyone with any real sense knows there needs to be a rent tax of some sort, but his current position leaves him out of the discussions. He should have worked out what the miners would consider a fair rent tax, and argue for it and make it seem like he was in there trying to broker a deal. This is what Rudd did in 2007: he made it look like he was already in charge – he made himself part of the discussion. Abbott just sets himself as opposite-man.

Now sure, the LNP are doing ok in the polls – the Essential Media poll out today has the ALP in the leader 51-49 – but he’s not in what you would call an election winning position. Oppositions win elections at a Federal level when they are well out in front, and it gets to a point where people assume they are going to win – this happened in 2007, 1996, 1983, 1975 and 1972. Abbott is not at that point , and part of the reason is the slide in the polls is all Rudd’s doing, it is not Abbott’s. He still hasn't worked out the “alternative leader” part of the job.

Rudd answered Abbott’s question pretty easily, and he made fun of the Oppositions tactics, by stating: “It took three questions from those opposite to lead up to the crescendo of the Leader of the Opposition's first question”.

But Rudd’s best response would come next when Joe Hockey asked him about Xstrata's apparent decision to put some projects on hold all because of Rudd’s “bungled, big next tax”. Rudd used the question to reveal the truth about most of these claims by mining complains, and showed them for the bulldust they were – especially the one made in The Australian about Rio Tinto “shelving” “billions in mining projects”. A report that was so wrong that Rio Tinto was forced to make an announcement to the ASXS contradicting the story later that day (and after it had lost about 3.5% in the value of its shares). Rudd said to Hockey that “The Member for North Sydney does not do his homework”, and suggested that if the opposition were going to keep running its scare campaign it needed to remember that the key part of any scare campaign was “Get your fact straight!”. 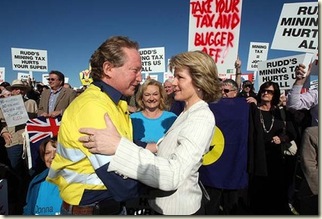 This was point alluded to in a question by Julie Bishop where she cited the Deloitte Western Australian Stock Exchange Index, and asked if Rudd still stood by his statement that the RSPT has had no impact on share prices. The problem of course is Rudd never said such a thing, and Bishop’s use of Deloitte was a pretty obvious case of her searching for any bit of data that sort of-kind of backed up her argument (such that it is). Rudd cited the ASX figures, compared them to Canada, USA, Brazil etc, and then said to her that “facts are a problem when you’re running a smear campaign”. He then turned to her appearance at the recent Billionaires’ Protest in Perth, calling it “protest by Prada”. A very nice line.

After this it was all by the numbers stuff – GP Super Clinics, BER spending. There wasn’t even a motion to suspend standing orders. All in all a pretty tame QT to start what many suggest will be the last sitting period before the election, meaning the next six QT’s could be our last till November – so enjoy them, you political tragic!

I did think Rudd and co were on the front foot today, spicing the verbiage with quite a few decent facts. But, harking back to your earlier post, I think relying on question time to correct the factual errors propagated daily by Oppn and MSN is overly optimistic as it is based on the false assumption that the press gallery cares about the issues when of course it is only the colour and movement of the battle scene that holds their interest.

This evening's headlines had little to do with the facts of disputed issues and I don't have much hope that the print and radio headlines tomorrow will be any more informative. Sad, sad, sad.

THe podcast from the ABC left out the condolence motion. Is that normal practice?