The End of the Greatest Streak in Sport

Last night as I went to bed I had a bad feeling. Roger Federer was due to start playing his French Open Quarter Final against Robin Soderling. He had beaten Soderling 12 times in a row, and yet I was worried. Federer had been playing well and looked in good touch, but still I worried. For some reason I lacked my usual confidence. And so when I woke up this morning and quickly switched on Fox Sports News and saw the score line that showed Federer had lost in four sets I was shattered but not as shocked as I thought I would be when this day would come. This day that saw the end of Federer’s amazing streak of twenty three consecutive semi-final appearances at Grand Slams. 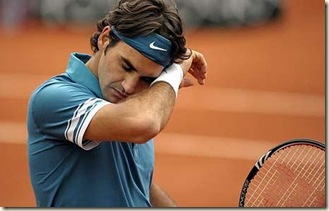 Twenty three in a row. From Wimbledon 2003 to the Australian Open 2010. Twenty three!

Let’s give it some context: the last guy to beat him before a semi final was Gustavo Kuertan in 2003. Coincidentally, last night Kuerten was awarded the International Tennis Federation’s lifetime achievement award.

Let’s give it some more context: The next best streak is by Ivan Lendl of ten. Yes ten.

Let’s give it even more context: of the four players who made the semi finals of this year’s Australian Open, Federer was the only one who made it to the Quarter Finals at the French Open. Which means that the current best streak of semi-final appearances is one.

OK, one final bit of context: Rafa Nadal, easily one of the greatest players of all time has a best streak of five semi-final appearances in a row. Five! For Nadal to beat Federer’s streak he would have to make every semi final until the Australian Open in 2016.

In January I wrote more on the streak, but there are a few other things to consider. Today’s loss also means his streak of eight consecutive Grand Slam finals ends. This however is only the second best ever streak of consecutive finals appearances in the modern era. Federer of course also holds the best ever record with ten in a row (the two streaks were interrupted with a single loss in a semi-final). The next best? Laver and Agassi with four. The most achieved by Nadal? Try two. That is not to belittle Nadal (or Agassi, or Laver), but to just make you grasp how amazingly spoilt we have been by Federer. In decades to come people will not be able to believe it really happened. 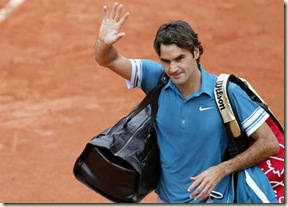 In Federer’s press conference after his loss his joked that at least his consecutive quarter finals streak was still alive. It got a good laugh, and no one really considers it a streak because there is something special about making a Grand Slam semi final – the sense that once you get there anything is possible. And since his streak began that anything has meant two things – Federer will win the tournament or the person who beats Federer wins the tournament.

But I thought about the quarter final streak, because it does deserve some attention. In some way it is a bit like making the cut of a major golf tournament. Everyone always aims to be around for the second week of a Grand Slam tournament, just like everyone aims to be around for the weekend of the major golf tournament (or indeed any golf tournament). For anyone else except Federer and Nadal, getting to the quarter finals means you’ve had a pretty good tournament. If you want to be in the top ten in the world you have to be making the quarters; after all only eight players make it.

So I thought I’d have a look at how his quarter final “streak” compares to others (and remember part of the magic of the streak means not missing a tournament for any reason – be it injury or sickness or laziness in the case of Connors, Borg and McEnroe with regards the Australian Open in in the 1970s and 80s). I’m also only counting the professional era. Here’s the list:

So while it doesn’t have the magic of his semi-final streak, it is still an amazing feat. If it is so easy to make the quarter, surely you would say Nadal would have done it more – but he hasn’t yet been able to do it for two years straight; Federer has done it for 6 years (and still counting).